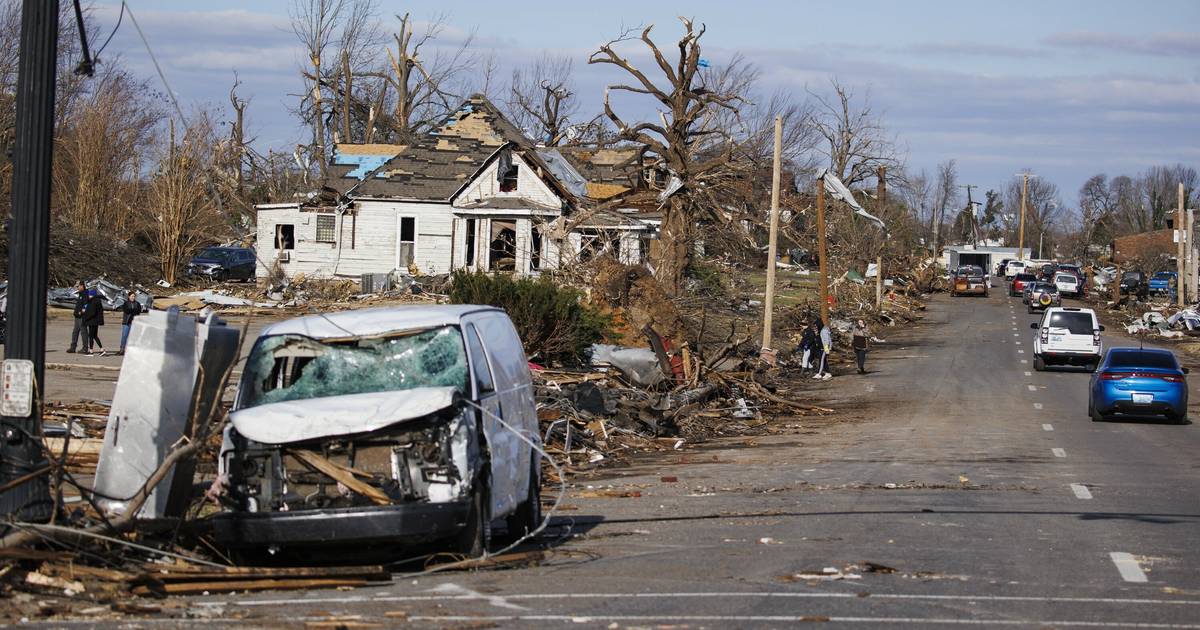 Update Mayfield Kentucky’s governor Beshear has trouble putting the extent of the destruction into words – the devastation caused by the tornadoes in the USA is so gigantic. Saving someone alive would be a miracle, he says. In his state, the death toll is likely to be more than 100.

After a devastating tornado in the American Midwest, more than 100 people are believed to have died in the state of Kentucky alone. More than 80 fatalities have been reported, but the number will continue to rise, said Governor Andy Beshear on Sunday morning (local time). Among other things, the storm leveled a candle factory on Saturday night, which was full of workers. “It would be a miracle if we pull someone else out of this,” Beshear told CNN. 4.5 meters of steel and broken cars are now where the roof used to be.

The tornado cut more than 200 miles of devastation through parts of Kentucky. In the candle factory in Mayfield, a town with about 10,000 inhabitants in western Kentucky, the night shift workers would have tried to entrench themselves in a supposedly more stable part of the building. But the force of the tornado was simply too great, Beshear said. Rescuers sometimes had to climb over the dead to reach survivors, said the city’s fire chief, Jeremy Creason.

In Arkansas, entire cities have disappeared from the face of the earth, said Governor Beshear. In Mayfield, wrecked cars and downed power poles lined the makeshift streets. Many of the houses that were still standing lacked roofs and windows.

On Saturday, 40 of the 110 people who had worked there at the time of the collapse were rescued from the candle factory there. For the rest, there was next to no chance of survival. Among those missing was a 50-year-old mother of four whose loved ones were on night watch Saturday. Her brother Darryl Williams said she made candles there that are given as gifts at Christmas. That’s probably why she lost her life.

In Kentucky alone, the tornadoes left a trail of destruction 200 miles (320 kilometers) away. “Everything in their path is gone. Houses, shops, government buildings – just gone. Parts of industrial plants, roofs are in trees. It’s hard to imagine that’s even possible,” Beshear said. “The devastation is like nothing I’ve seen in my life and I’m struggling to put it into words.”

Photos taken Saturday showed people helping to recover items from a destroyed home in Mayfield. Others showed streets of the small town – the houses looked like they had been shaved away.

Beshear promised the people in the disaster area a difficult hour in the face of freezing temperatures and widespread power outages. “It’s going to be a tough night for a lot of people in Kentucky,” he said. In the meantime, the governor threatened to lose his voice – for example when he talked about his father’s hometown called Dawson Springs. “There isn’t a house within a block of my grandparents’ house,” Beshear said. “And we don’t know where all these people are.”

In Illinois, the roof of a distribution center of the online retailer Amazon partially collapsed. Six people died there, 45 people were rescued from the rubble, according to the fire department. Amazon founder Jeff Bezos expressed dismay at the “tragic reports” from Edwardsville. “We are heartbroken about the loss of our team members,” he tweeted on Sunday night.

The storm system is the latest in a string of natural disasters in the United States. The United States has suffered devastating storms, severe flooding and widespread wildfires this year. US President Joe Biden sees the frequency and intensity of the disasters as a consequence of climate change, which he has made one of his top priorities to combat.

According to the meteorologist Marco Manitta from the German Weather Service (DWD) in Offenbach, the tornadoes in Kentucky were created in connection with a long-lived super cell – a large thundercloud. In the USA there are occasionally favorable conditions for the formation of such thunderclouds. The current tornadoes would have reached a strength of F4 on the so-called Fujita scale, which indicates the damage class. That corresponds to the second highest level. Such tornadoes could also collapse or severely damage solid buildings, Manitta said.

Especially in the USA, where many buildings are made of wood, the destruction could be all the more severe. In addition, the tornadoes had moved over partly densely populated areas. As a result, the storms also pick up more debris, which can then develop additional destructive power. F4 tornadoes could easily knock cars through the air, Manitta said. A strong negative pressure could ensure that houses are literally destroyed explosively.

Biden pledged help to the states affected by the tornadoes on Saturday. “I promise you, whatever is needed, the federal government will find a way to supply it,” the President said at a recently scheduled appearance in Wilmington, Delaware. He agreed on Saturday to declare a state of emergency for the state of Kentucky, which was hit hardest by the tornadoes. This speeds up federal aid. The governor had previously declared a state of emergency in Kentucky and activated the National Guard.

Biden also promised a visit to the Kentucky disaster area. But he said he would wait until he wasn’t interfering with rescue operations. Together with First Lady Jill Biden, he prays for the victims and their families.

Russian President Vladimir Putin also expressed his condolences. “Please rest assured of my sincere condolences at the tragic aftermath of the tornado that devastated Kentucky and a number of other U.S. states,” the telegram to the U.S. President released by the Kremlin on Sunday said.

Here is the photo gallery: Dozens feared dead after devastating tornadoes hit US