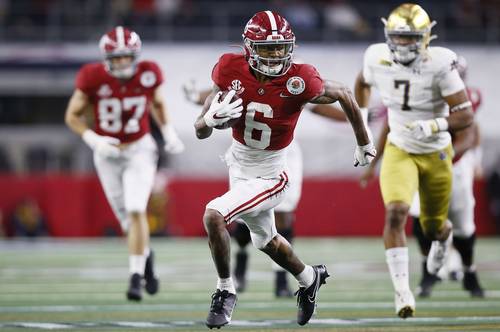 Alabama returns to the college football final by crushing Notre Dame 31-14 and claiming the Rose Bowl to contest the NCAA championship.

He triumphed with four touchdown passes from quarterback Mac Jones, and the outstanding performance of receiver DeVonta Smith, who entered the end zone three times, to continue in the fight for the Heisman trophy.

Smith had seven receptions for a total of 130 yards at Arlington Stadium, Texas, before more than 30,000 fans.

With this result, the Crimson Tide placed for the fifth time in the final and is the favorite for the championship to be held on January 11 at Hard Rock Stadium in Miami against the winner of the other series between Clemson and Ohio State.

The explosive Crimson Tide gave its adversary no respite and in the first quarter they were up 14-0 with the Heisman-candidate Jones and Smith duo.

Najee Harris also excelled on the field with a spectacular 53-yard carry and jumped over a standing defender to put the ball in the goal zone.

The best running back in the NCAA had 125 yards rushing. Harris’s impressive jump went viral on social media, as some fans commented that they had never seen a jump of that magnitude on the pitch.

The player, chosen by AP to Team All America, has been celebrating his scoring for several seasons as did soccer player Megan Rapinoe.

Alabama continued to dominate the game and went into the break 21-7, an advantage that increased in the next two periods to maintain its status as the team of the season with more than 30 units, which it demonstrated with big plays in the decisive moments and conquer the Rose Bowl by sealing the victory 31-14.

The players celebrated the victory and posed with the trophy lifted by head coach Nick Saban.