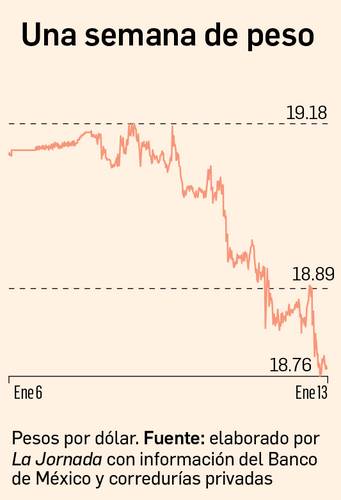 The peso extended its solid performance in recent sessions, encouraged by the release of an encouraging report on the perception of the US economy.

In wholesale operations, the most representative of the exchange market, the Mexican currency added seven cents and ended the session at 18.76 units against the dollar, according to the closing price of the Bank of Mexico. This is its best level since February 2020. It accumulated a weekly gain of 38 cents (2.02 percent), the highest in five months.

The peso –which last year became one of the best performing global currencies against the dollar– accumulates a 3.7 percent advantage in the first two weeks of the year.

For its part, the Mexican Stock Exchange (BMV) ended with a slight decline of 0.03 percent, closing at 53,576.72 units, ending a streak of nine consecutive upward days. However, it posted a weekly advance of 3.56 percent.

Mexican assets were helped by a strong report on consumer confidence in the United States, who expect price pressures to ease considerably over the next 12 months. The survey prepared by the University of Michigan showed that one-year inflation expectations fall in January to the lowest level since the spring of 2021.

Oil prices posted their seventh straight rise, boosted by rising Chinese demand. The Mexican export mix gained $1.40 to $68.94 a barrel; in the week it spun a return of 6.43 dollars (10.28 percent).

A weaker dollar tends to boost demand for oil, making it cheaper for buyers dealing in other currencies. Recent Chinese purchases of crude oil and a rebound in road traffic in the country also raised hopes of a recovery in demand in the world’s second-largest economy, after the reopening of its borders and the easing of restrictions due to the covid.