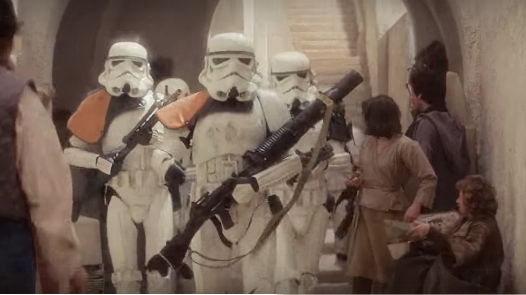 As you can see, the Lewis machine gun was even used by the Empire’s stormtroopers in their “star wars” with the rebels, and it could not be better advertised! Frame from the IV series of the epic “New Hope”

“I want to ask to be transferred to the machine gun team. — Are you familiar with the machine gun? — I know the systems of Shosh, Berthier, Madsen, Maxim, Hotchkiss, Bergman, Vickers, Lewis, Schwarzlose. – Wow! I’ll talk to the regimental commander.”
Mikhail Sholokhov. Quiet Don

Weapon stories. The machine gun, which will be discussed today, was designed by Colonel of the American Army Isaac Newton Lewis in 1911, while he used the developments of Samuel McLean. But here, between General William Crozier, the head of the US artillery department, and Isaac Lewis, as they say, “a black cat ran”, and the American army did not receive a machine gun then. Lewis himself was offended and left the army.

Machine gun and spare discs for it. Photo forgottenweapons.com

In 1913, he moved to Belgium, and already there, in the city of gunsmiths Liege, he created his own company Armes Automatique Lewis. He began promoting his machine gun in Europe back in 1910. Then he sold the rights to it to the American company Automatic Arms Company of Buffalo in New York and the Belgian Factory National. The Belgians in 1913 produced a small number of his machine guns under the British .303 cartridge, and in 1914 he managed to sell a license for his machine gun to the British company Birmingham Small Arms (BSA). So for him, inventive activity ended in the best way: Lewis was paid a lot of money, and he became a very rich man. And then, together with his factory, he completely moved to England and ended up there just in time – literally on the eve of the German invasion.

With the outbreak of the First World War, the production of Lewis machine guns under the designation Model 1914 was deployed by the BSA company in Birmingham and the Savage Arms Company in the USA. It was officially adopted by the British Army on October 15, 1915.

The main difference between these two designs was that the BSA weapons were designed for .303 British cartridges, while the Savage produced machine guns for .30-06 cartridges, which required certain alterations to the magazine, feed mechanism, bolt, barrel, extractor and gas operating system. But Savage also produced machine guns chambered in .303 British: M1916 and M1917, which were exported to Canada and the UK. A lot of machine guns fell into the US Army (although officially it did not accept it for service!) And went to the Navy. And later they were delivered to the UK under Lend-Lease during the Second World War.

Note that the creators of the machine gun fully took into account the love of the military for simple and technically advanced systems and made a truly simple and technically perfect weapon. Automatic machine gun had a gas drive. Part of the powder gases expanding after the shot was removed from the barrel and pushed the piston under the barrel back. The piston rod, which was included in the receiver, had a serrated thread, just like the Saint-Etienne machine gun. But it was located on its outer surface and rotated the gear wheel not inside it, but outside, located in front of the trigger guard in a characteristic tide. Interestingly, the return spring was located just inside this wheel, which made it possible to significantly reduce the size of the receiver. It should be noted that the return spring in the Lewis machine gun also had an adjusting device for changing the recoil resistance depending on changes in temperature and wear. As unusual as this decision may seem, the Lewis design turned out to be quite reliable and was then even copied by the Japanese and widely used by them during World War II.

Schematic diagram of the Lewis machine gun. On the left, its shutter is very well shown, and on the right, the piston rod with gear cutting and a protrusion with a striker

At the rear of the piston there was a vertical rack with a striker, on which a bolt was put on, hollow inside. When the force of the return spring returned the piston after firing and retreating to the rearmost position, the rack moved along the helical cam track in the bolt and rotated it at the end of its stroke, when it was at the breech. This allowed the three lugs at the rear of the bolt to fit into the slots in the receiver to secure the bore. And the fixed drummer at that time still continued to move forward and through the hole in the shutter mirror struck the primer.

But perhaps the most unusual part of this machine gun was the aluminum barrel casing, which forced the muzzle stream of powder gases to draw air out of it and thereby cool the barrel, on which an aluminum radiator with radial fins was put on from the muzzle to the breech inside the barrel. There was a discussion about whether the casing was really so necessary, since during the Second World War, many old aircraft machine guns that did not have a radiator casing were transferred to the anti-aircraft units of the British militia on British airfields, and they all functioned perfectly without it.

The Lewis machine gun used unusual open bottom disc magazines for 47 or 97 rounds. In such stores, the cartridges are held by the central disk by the nose, and they themselves are located inside in the form of a radial fan. There is no spring in such a store, and the supply occurs due to the fact that the cartridges simply fall into the machine gun as a result of mechanical action. So, the store at Lewis was driven by a cam at the top of the bolt, which, through a special curved lever, ensured the operation of the cartridge feed mechanism and at the same time turned the store itself.

Already in the first days of the war, the machine gun was used during the defense of Namur, and it began to be issued to British infantry battalions in early 1916. At the same time, the heavier and less mobile Vickers machine guns were withdrawn from the infantry for use by a specialized machine gun corps. In early 1917, the US Navy and Marine Corps adopted the M1917 Lewis pistol chambered in .30-06.

The machine gunners on the Western Front noted the “invulnerability” of the machine gun (it did not have a casing with water, which was easily penetrated by bullets and shrapnel, after which the machine gun failed), but were not too happy with the fact that they were continuously firing from it, shooting 12 stores in a row, impossible. Machine gunners were required not only to be able to shoot accurately, but also to maintain their weapons. So, it was necessary to completely disassemble it, and then, blindfolded, reassemble it correctly in just one minute, and this despite the fact that the machine gun consisted of 104 parts!

The machine-gun team consisted of seven people: two shooters No. 1 and No. 2 and five ammunition carriers. Accordingly, the tactics of the British infantry also changed. If earlier she went on the attack with chains, now a squad or a platoon, under the cover of a Lewis machine gun, fled to the nearest shelter, from where they covered the machine gunners running towards him with fire, after which everything was repeated. The Germans appreciated this tactic (as well as the machine gun!) And immediately adopted both. At the same time, they nicknamed him “]i]the Belgian rattlesnake[/i]”, which, perhaps, best of all characterizes his high fighting qualities.

Scheme of the machine gun “Lewis” from the patent

In 1917, the Russian Empire purchased 10,000 Lewis machine guns from the British government and ordered another 10,000 guns from the United States. The US government was unwilling to supply Tsarist Russia with these machine guns, and there is some doubt as to whether they were actually sent, although records exist that show that 5,982 Savage machine guns were delivered to Russia by March 31, 1917. In any case, machine guns of this type during the years of the civil war in Russia were used by both whites and reds, as well as all kinds of nationalist formations.

British Mark IV tanks were also supplied with these machine guns, as the military appreciated the compactness of their magazines. However, they did not take into account one circumstance! It turned out that the tank’s ventilation system leads to a reverse flow of air through the cooling jacket of the machine gun, as a result of which powder gases are blown directly into the shooter’s face during firing. Therefore, as soon as an improved machine-gun belt was developed for the Hotchkiss machine gun, the Lewis was immediately replaced by them on all later models of tanks.

The only serious drawback compared to the Vickers machine gun was the high price of the Lewis. It cost £165 in 1915 and £175 in 1918, while the price of a Vickers was only about £100. But the assembly of the Lewis was about 80% faster than the Vickers, not to mention the fact that it was much more portable. As a result, by the end of the First World War, the number of Lewis machine guns exceeded the number of Vickers machine guns in a ratio of about 3: 1.