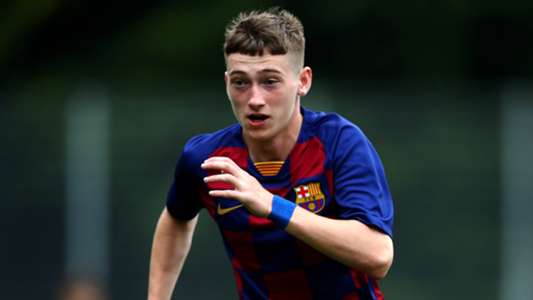 He is considered one of the greatest talents in England and once dared to make the leap to FC Barcelona. Now Louie Barry is back home.

The term “the next Messi” is used inflationarily these days to refer to exceptionally talented youth players. Almost every country had it. The young English actor Louie Barry has also been named as such.

When the now 17-year-old was a student at the Bishop Walsh Catholic School in Sutton Coldfield, his special abilities were already being demonstrated. “When he first got there, all the other kids called him ‘little Messi’. It was clear from the first training sessions that this was a special footballer – he dribbled around every single player as if the ball were sticking to his feet” said Chris Lepkowski, a sports journalism professor at Birmingham City University who followed Barry’s career from an early age, speaking to Transfermarkt.

What sets the center-forward apart from most of the other next Messis, however, is the fact that he was closer to Lionel Messi in one more thing than just his skills – Barry played at Barcelona before.

‘One of the best young players in his country’: Barca snapped Barry at the age of 16

In the summer of 2019, Barry moved from the West Bromwich Albion offspring to the Catalans U19 at the age of 16. In the official press release, the Blaugrana made it clear what a talented young man they had landed. “He is considered to be one of the best young players in English football. He has signed for three seasons and has passed the relevant medical tests,” said the LaLiga club, which beat PSG, among others, in the race for young talent. The dream of many youngsters came true for the goalscorer.

According to Lepkowski, Barry prefers to play in the center, but can also use the wings and is fast, versatile and has a “good understanding of the game”. After moving to the Spanish metropolis, he impressed with three goals straight away in the preparation for the season. However, he had to wait three months for his competitive debut because the processing of his registration with FIFA was delayed. Finally, Barry, who is the first English player ever to be trained at Barca’s La Masia junior academy, was finally allowed to play.

However, the enthusiasm and the dream were short-lived and the said three seasons should not wear the right-footer, who has both English and Irish citizenship, in the prestigious Barca dress. After just six months and, among other things, three wild card appearances in the UEFA Youth League, the chapter at the Messi club was history. It was followed by the move back home, more precisely to West Brom’s rival Aston Villa in the youth division.

“Imagine you’re 16 years old, you’ve moved to Barcelona and the three people who brought you in and convinced you are no longer there – and you’re 16 and away from home,” explained Christian Purslow, Managing Director the Villans, the attacker’s transfer: “He was very restless and we saw a chance.” In England, Barry is known “because he is the best 16-year-old in the country,” added Purslow in January last year.

“It sends a powerful message about the ambition of this football club.”

But Barry’s return to England should not be seen as the much-cited failure of a young talent at a big club. Rather, a second dream came true for the England U17 international. Barry has been a Villa fan since he was a child and wants to take the final step into the professional field there. “He’s undoubtedly a player to watch out for – if not this season, then certainly in the 2021/22 season and beyond,” said Lepkowski with conviction.

Whether it will be the case at Villa or at any other club, he has no way of knowing: “He’s someone who might benefit from moving to a club in a lower division just to grow up a bit, because they Attributes in themselves are clearly present. “Barry only has to work on his physique, which the university lecturer described as a” temporary obstacle “.

In addition to his footballing skills, the teenager impressed his teammates off the field with his attitude and dedication. “There was also a modesty and the desire to influence others. As an older student, he helped effectively in physical education and was considered a mentor for the younger students,” recalled Lepkowski, who also saw Barry’s behavior as helpful with regard to his professional career.

Barry could also serve as role models from his former national team colleagues and contemporaries Jude Bellingham and Jamal Musiala, who are part of the professional squad at Borussia Dortmund and FC Bayern Munich. The youngsters won the prestigious Val de Marne tournament with the U16s of the Three Lions 2018, in which Barry was also top scorer.

The first months at Villa are at least impressive: Barry has been playing for the U23s since July and scored four times in seven league games.