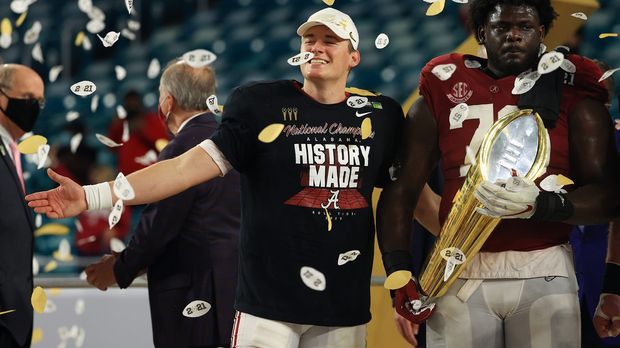 Munich / Foxborough – For the first time since 1993, the New England Patriots could use a first-round pick in the draft for a quarterback. For long-time offensive coordinator Charlie Weis, the potential successor to franchise legend Tom Brady has already been determined.

Mac Jones or nothing

“What are the two most important qualities of a star quarterback?” Weis asked on Sirius XM NFL Radio when asked about Alabama quarterback Mac Jones. “They have the ‘it factor’ and they play exactly – that’s exactly what it was.”

For the first time in nearly three decades, the Patriots are now back on the teams who could select a quarterback in the first round of the draft. Jones, who led Alabama to the national college title in January, is one of the most sought-after playmakers and is linked by numerous experts with the six-time Super Bowl winner.

“Of course he has played with good players. But even if you play with a number of stars – he is the leader of the offense,” said Weis. As an offensive coordinator, the now 64-year-old won three Super Bowls with New England and thus had a great influence on the then still young career of a certain Tom Brady.

“I am convinced that this boy is an excellent quarterback. For me he has fewer weaknesses than everyone else,” said Weis.

Lack of athleticism as an advantage?

Unlike in the recent past, the Patriots will be able to vote early in just under two months, namely at the 15th position in the draft. Chances are, Mac Jones will still be an option at this point.

The 22-year-old is not characterized by outstanding mobility and the will to run himself, but is more of a classic pocket passer. A clear advantage, as Weis finds.

“Trevor Lawrence is a special player because he can do everything Mac Jones can, and he’s very athletic. Justin Fields, Zach Wilson and Trey Lance are very good players. But this boy is the one who plays all the plays. He wins and throws completions – that’s all he does. “

At the end of the interview, Weis allowed himself to be carried away with a daring comparison: Jones’ situation before the draft reminded him of Drew Brees, who was selected in the second round in 2001 by the San Diego Chargers.

“He wasn’t selected until the second round because everyone said ‘he’s not right behind the center and his arm isn’t strong enough’. Despite that, he played well at Purdue University and put almost every ball on.”

It remains to be seen whether Mac Jones can build on the success of Drew Brees. Same goes for Weis’ recommendation to head coach Bill Belichick and the New England Patriots.

In the night of April 29th to 30th (Central European Time) we know more.

Do you want the most important NFL news, videos and data directly on your smartphone? Then get the new ran app with push notifications for the most important news about your favorite sport. Available in the app store for Apple and Android.