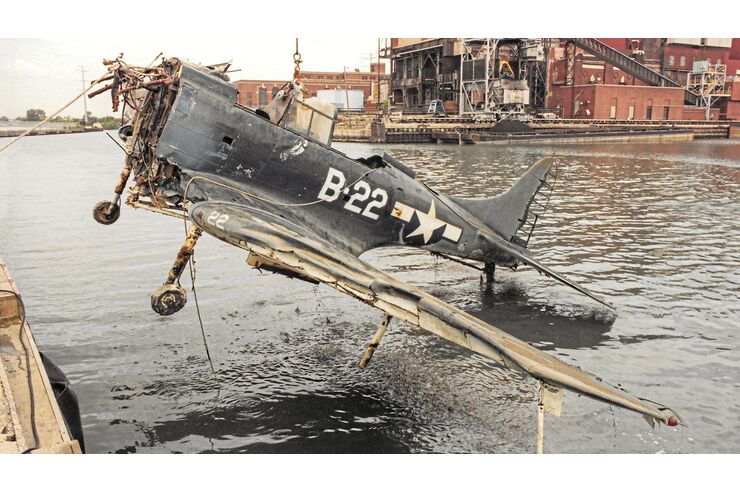 Thanks to a special law and a swap deal, Jerry Yagen is now the owner of a Douglas SBD Dauntless. Once lost in Lake Michigan, she will soon be resurrected.

At the height of World War II on January 20, 1944, far out on Lake Michigan, the young pilot, Lieutenant Charles L. Ford III (United States Navy Reserve) was on final approach to board the USS Wolverine (IX-64), the was used as a makeshift and training aircraft carrier for the Navy to complete the necessary take-offs and landings during training. Lieutenant Ford received a “come on” signal from the crew on deck and shortly afterwards a “wave off” signal because the approach was not suitable. He pulled the stick back and didn’t have enough power.

The inevitable happened: his Douglas SBD-5 Dauntless Dive-Bomber (Bureau Number 36175) stalled and tipped over the surface. He crashed into the lake, with the plane flipping on its back in a nearly vertical position. The young pilot found himself in the freezing cold winter water where he would have been hypothermic within minutes. Luckily, the USS Wolverine was well equipped with small tenders and experienced personnel whose purpose was to rescue pilots in the immediate aftermath of such events. Lieutenant Ford got off lightly with only two deep cuts on his forehead. However, the Dauntless sank to the bottom of dark, cold Lake Michigan, 55 meters deep here.

This story may sound a little far-fetched, or maybe even made up, but it’s true. During World War II, from the fall of 1942 to late 1945, the United States Navy conducted aircraft carrier qualifications on Lake Michigan near Chicago. The area had been chosen because it was a safe region, far from possible enemy submarine attacks. Navy pilots wishing to qualify for aircraft carrier duty flew out of Glenview Naval Air Station north of Chicago over Lake Michigan, where they attempted the requisite number of landings and takeoffs on the USS 500-foot deck Wolverine (IX-64) or the USS Sable (IX-81) (both were converted paddle steamers). As a result of accidents like that of Lieutenant Ford, about 130 aircraft were lost in the lake. However, as a result of this project, nearly 15,000 pilots successfully completed during the period.

Even the official accident report has survived to this day. The history can thus be documented without any problems.

Little did Lieutenant Ford know at the time that his crash had done future generations a huge favor by dumping in the frigid water a specimen of an airplane built and flown by the men and women of “America’s greatest generation.” to preserve the freedom of their country. When the Douglas Dauntless SBD-5 Dive-Bomber (Bureau Number 36175) was lost, it was a factory new type that had been transferred to the Navy in October 1943, just three months before it was lost.

In the late 1980s, a small team of oceanographers began searching the southern basin of Lake Michigan for lost witnesses of World War II. The company A & T Recovery was tasked with the task of locating and recovering various aircraft. The venture quickly caught the attention of management at the National Naval Aviation Museum (NNAM), located at the Pensacola Naval Air Station in Florida. In the early 1990s, the management of the National Naval Aviation Museum, together with A&T Recovery and support from the administration of the Naval Aviation Museum Foundation, had an ambitious goal: to save as many of the aircraft once lost in Lake Michigan as possible for the American be saved and restored to the public.

The Douglas Dauntless mostly earned their spurs in the Pacific War. Few found their way back to the United States.

Historical Significance of the Aircraft

In September 1994, A&T also recovered Lieutenant Ford’s plane from the depths of Lake Michigan. The plane had been located at a depth of 55 meters a few months earlier. After providing a preliminary report based on a visual inspection, a lengthy review of the aircraft’s history and historical significance was conducted and clearance for salvage was granted.

After salvage, the aircraft was expertly dismantled and transported to the National Naval Aviation Museum. After many years of storage, the museum’s administration offered the SBD-5 for potential trade under Title 10 United States Code No. 2572. This states that documents, historical artifacts and/or antiquated combat material can be used as a loan, gift or object of exchange since they are state property. The idea is simple and straightforward: exchange the aircraft for something else of greater value to the United States Navy historical collection.

The Military Aviation Museum in Virginia Beach on the east coast of the USA is the new home of the Dauntless.

Gerald “Jerry” Yagen, founder of the Military Aviation Museum in Virginia Beach, came forward and made a suggestion. Yagen would restore a Grumman FM-2 Wildcat that had also been recovered from Lake Michigan. To accomplish the task, Jerry commissioned the Kalamazoo Aviation History Museum to do the bulk of the restoration work on the Wildcat. The Air Zoo staff and volunteer mechanics bring a wealth of knowledge and experience restoring aircraft rescued from Lake Michigan. The effort spanned several years and also included working with universities and schools to introduce students to the history of US Navy aircraft during World War II, materials science, metalworking and many other aspects important to the restoration of historic aircraft .

In February 2021, the Dauntless arrived at its new owner as an object of exchange. It was open to the public for a while, with information boards revealing details. Charles Ford III’s sons also took the opportunity to see the aircraft. In mid-April, the remains of Bureau Number 36175 and material that had since been found in California were then packed up and sent on a journey to Pioneer Aero in New Zealand, who were commissioned with the restoration. Once that is complete, the Dauntless will return and be displayed at the Military Aviation Museum as a striking example of the work of the Greatest Generation.