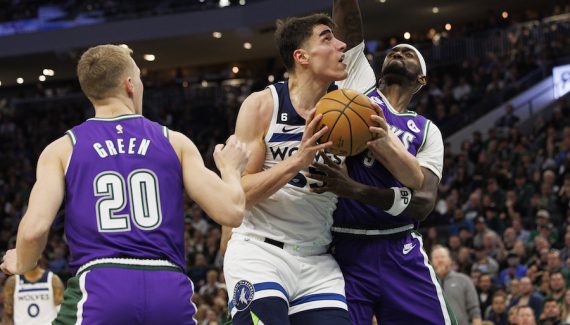 We suspected that Shaedon Sharpe would not make the low post weight. But rather than its power or its size, Luke Garz used his technique to eliminate the back of the Blazers very easily. A marvel of “spin move” later and the pivot of Wolves arrived at the circle without any challenge from annoyed Blazers.

Facing the men of Chauncey Billups earlier in the week, the Wolves substitute pivot gave a good overview of what he can do in attack. “Hook”, “floater”, first 3-point shot of the season… The former best player in the NCAA was extremely profitable with 14 points (5/5 on shots) in 13 minutes. More than one point per minute therefore for the one who finished with a +17 to +/-.

« His points carried us, we served him. He is a very gifted player offensively but he was remarkable in defense (note: four faults all the same). He covered the pick-and-roll, he challenged the backs, he battled on every rebound… He’s a hell of a player », lists Chris Finch, noting that he mainly uses his player against opposing substitutes. Luka Garza therefore did not have to fight with Jusuf Nurkic that evening.

His great outing comes a few days after his 9 points and 6 rebounds against the Nuggets, or his 16 points, his best game, against the Bucks. The Washington native is used more these days compared to the start of the season when Chris Finch had no minutes for him. It was in the G-League that the pivot kept pace with 11 points (62% on shots including 49% from afar) and 9 rebounds on average.

You never know when your name’s gonna be called

But the successive absences of Rudy Gobert and Naz Reid (back), in addition to Karl-Anthony Towns opened up opportunities for him. ” You never know when your name is going to be called. I’ve only been in the league for two years but everyone gets called up at some point, the league works like that. We have 17 players and injuries happen, they get sick, miss a game here or there », recalled the 24-year-old who said he had to deal with the Covid factor during his rookie season with the Pistons.

His inexperience does not prevent him from speaking up to point out his team’s concerns. Facing the Bucks recently, the Wolves were archi-dominated in the rebound sector with only 36 catches for 68 balls conceded. The young pivot, mobilized behind the holder Naz Reid that evening, had taken only three rebounds.

« I believe we big guys need to do a little better at fighting around the circle and blocking (the opponents). It is a level of collective competitiveness. We can all do better. Personally, playing 18 minutes tonight and only having one defensive rebound is something I will regret going forward. “, displayed the former star of Iowa whose speech and performances could allow him to aim better than a modest “two-way contract”.