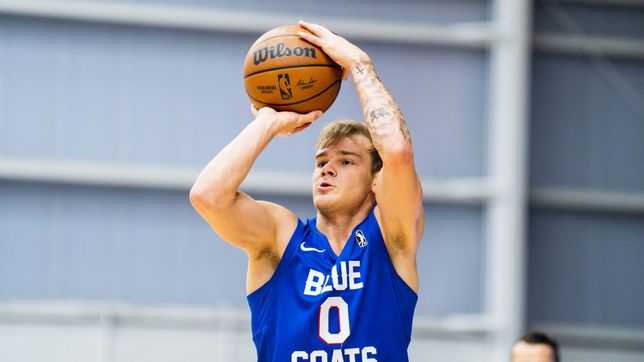 The Slam Dunk Contest It is the most awaited event of the All-Star Weekend from NBA and the edition of the 2022-23 season will be historic.

According to the report of Shams Charania, of The Athletic, Mac McClungguard for the Delaware Blue Coats, will be the first G League player to participate in the NBA Slam Dunk Contest. This year he is averaging 17.6 points and 4.4 assists.

In addition to McClung, K.J. Martinde los Houston Rockets, y Shaedon Sharpeof the Portland Trail Blazers they promised to participate in the Slam Dunk Contest. With this, only one participant remains to be revealed.

McClung has been an internet sensation since the high school due to his amazing dunks. The 6-2 (1.88m) guard spent his college days between Georgetown and Texas Tech before seeking an NBA draft.

After failing to do so, he signed an Exhibit 10 contract with the Lakers for the preseason of the 2021-22 campaign to control his rights in the G League. McClung was named developmental league Rookie of the Year after averaging 19.6 points, 5.8 assists, 3.3 rebounds and 1.2 steals on 40.3 percent shooting from three points for the South Bay Lakers.

IT MAY INTEREST YOU: LBJ believes that KD will be the NBA’s all-time scoring leader

McClung in the NBA

McClung has NBA experience since in the 2021-22 season he signed two 10-day contracts with the Chicago Bulls and a two-way with the Los Angeles Lakes at the end of the regular seasonbut only played twice.

With the Bulls he saw activity in one of the eight games in which he was present and recorded two points with a turnover.

The experience with the Lakers was different since he jumped onto the floor for 21:50 minutes in the last game of the regular season. McClung had six points, three rebounds, one assist and one blocked shot.