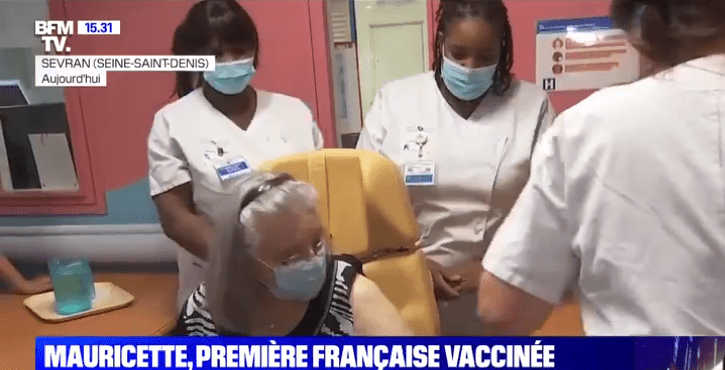 Even if you are not a believer, you have heard of the miracles of Lourdes. You may have seen Miracle en Alabama, this moving film by Arthur Penn which tells the story of a little girl, Helen, deaf, mute and blind from birth, who comes to life thanks to an admirable educator. Since Sunday, you can add the miracle of Sevran, of which Mauricette is the heroine!

A miracle that would not have happened if the government, in its great wisdom, had not undertaken a massive vaccination against Covid-19. A pioneer was needed: she was a pioneer, a 78-year-old Frenchwoman, a former household help, vaccinated in a hospital in Sevran. The news channels, warned in advance of this unprecedented event, crowded around her, smiling after the injection. And the nursing staff applaud. But the most miraculous, in this incredible story, is that half an hour later – the media have attested to it – Mauricette was still doing well!

To my great shame, I did not participate in this general jubilation, I did not swoon over this feat of science, I was not blissfully admired. My reflex was rather to ask myself why all this cinema. Sing the glory of our valiant leaders? Show everyone that the vaccine could work miracles and that it was therefore necessary to be vaccinated? I must have a bad mind, but I immediately found this whole staging to be ridiculous and counterproductive.

Ridiculous, like Martin Hirsch, director general of the AP-HP, who launched this historic word on social networks: “A little prick for the nurse, a big step for immunity. “ Ridiculous, like Emmanuel Macron, who immediately made, on his Twitter account, this declaration which will remain in the annals: “We have a new weapon against the virus: the vaccine. Hold together again. […] Let’s be proud of our health care system ”, adding that “The vaccine is fully covered. No fees to advance. » You will understand: the Head of State had carefully developed a communication operation. He was promoting the vaccine and, in the process, his own promotion.

It was a historic moment. He had declared war on the virus: he was on the verge of winning! It was also the victory of Europe. On December 21, after the green light from the Medicines Agency for the marketing of the Pfizer-BioNTech vaccine, the European Commission authorized the vaccination which would begin, in all the countries of the Union, between the 27 and the 29 December. Long live Macron! Long live Europe! It is true that both really needed it to regain some confidence.

However, this campaign risks being unproductive. The French, who are mostly reserved about vaccination, even hostile, will wonder about this rowdy advertising and will ask themselves even more questions. Why these drumbeats if the vaccine is, as we repeat, safe? If it doesn’t have short-term side effects, what will it be in the long term? Why did you choose this vaccine, which must be stored at -70 ° C and which we have learned is one of the most expensive? Why did the members of the government not set an example by being vaccinated first, as in other countries, rather than Mauricette?

Through this extravagant publicity, Emmanuel Macron and the government appear even more like swaggers, brave bulls more in word than in deed, jumping at the slightest opportunity to put themselves forward and make people forget that, in this war, they do not. were just junk generals.