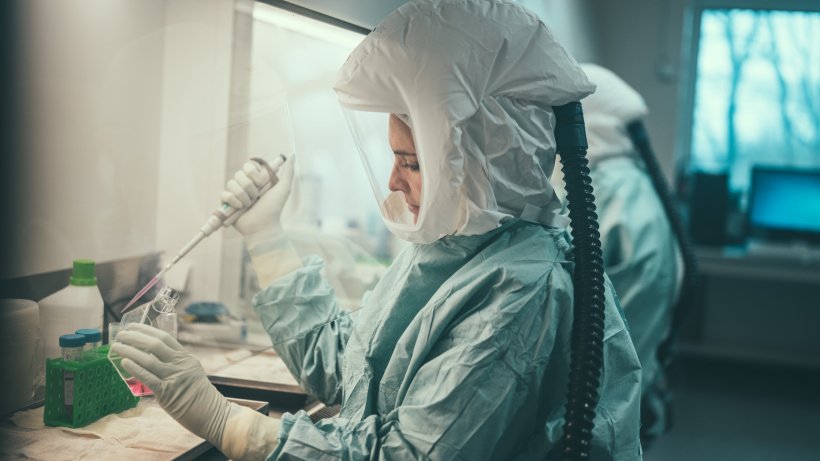 It can take up to three weeks before an infected person first appears symptoms developed: This is how long the incubation period lasts for monkeypox. Three long weeks – which explain why many experts are concerned about the current virus outbreak look. Will it remain at a few hundred cases worldwide or has the virus spread much more undetected?

The global outbreak is so unusual that one has to worry about whether it will happen like previous ones monkeypox outbreaks, said Federal Health Minister Karl Lauterbach (SPD) on Monday in Geneva. It is more likely that the way of spreading could have changed, “so that we now have to react quickly and hard to contain a global outbreak again”.

Monkeypox: how widespread is the virus in Germany?

By Tuesday afternoon, eight confirmed cases were known in Germany – three of them in Berlin. Cases also occurred in Bavaria, Baden-Württemberg, Saxony-Anhalt and most recently in North Rhine-Westphalia. The city of Cologne announced that there are three confirmed and one suspected case.

However, the Federal Ministry of Health expects a significant increase in cases: “Due to the many contacts of those currently infected, further diseases are to be expected in Europe and also in Germany,” says a current management report available to this editorial team. Also read: How monkeypox is transmitted and what the symptoms are

See Also:  Jessica Biel is a murderous housewife in the trailer for her new series on Hulu

In numerous countries, more than 100 confirmed cases and suspected cases have been detected, “and the trend is increasing every day”. So far, the West African monkeypox variant has been detected in the infections found in Europe. On average, this variant leads to milder courses than that Central African variant.

Nevertheless, Federal Minister of Health Lauterbach does not yet see “the beginning of a new pandemic”. “We still have a very good chance of stopping the pathogen – not only in Germany, but also in Europe,” said Lauterbach on Tuesday on the sidelines of the German Doctors’ Day in Bremen.

According to current knowledge, a risk to the health of the general population in Germany is considered to be low, added the President of the Robert Koch Institute (RKI), Lothar Wieler. According to the RKI boss, 177 infections in 16 countries have been detected worldwide.

Monkeypox: how to protect yourself?

The simplest protective measure is to reduce physical contact: According to experts, monkeypox is usually transmitted through bodily fluids such as semen, saliva, scab or other secretions. According to the RKI, transmission is also possible with face-to-face contacts – through excreted respiratory secretions.

The incubation period, i.e. the time between infection and the first Symptoms, is relatively long according to the RKI – between 7 and 21 days. The first symptoms of the disease are fever, headache, muscle and back pain and swollen lymph nodes. A few days after the onset of fever, eponymous smallpox develops on the skin, which eventually crusts and falls off.

Monkeypox virus: how dangerous is an infection?

In contrast to human pox, which has been eradicated since 1980, monkeypox is usually much milder, according to the RKI. Most people recovered within several weeks. The monkeypox virus (MPXV for short) is also much more difficult to transmit than the SARS-COV-2 corona virus, says Leif Erik Sander, infectiologist at the Berlin Charité.

How do you get infected with monkeypox?

In principle, however, anyone can become infected through skin contact, small children or people with immunodeficiency could also become seriously ill. In children under the age of 16 who are infected with the Central African virus variant, experts observe a case number mortality of up to 11 percent, in the West African it is one percent. The consequences of surviving an infection can be scars and, rarely, blindness.

Who is particularly affected?

So far, it has mainly been men who have had sexual contact with other men. According to the government report, the places of transmission of the cases that have become known in Germany so far are parties, including on Gran Canaria in Spain and in Berlin. Charité researcher Sander statistically classifies the apparently increased risk in the gay community: “MPXV is not interested in sexual orientation or gender. It’s just about close physical contact with as many people as possible. That’s all.”

Minister Lauterbach explained that it is now important to address the risk groups honestly. This is for their protection and should not be misunderstood as stigmatization. The minister appealed to those who have had anonymous sex with men to look out for skin changes and fever and to seek medical treatment quickly if they suspect it.

Also read: Monkeypox: Are They Dangerous to Humans?

How does the federal government govern?

Charité expert Sander advises caution: “The global monkeypox outbreak is very dynamic. We currently know too little about the chains of infection and the extent of the outbreak. Therefore, in my opinion, all close contacts of infected people should isolate themselves to prevent further transmission as best as possible to prevent,” wrote Sander on Twitter.

And further: “In order to better understand the outbreak of monkeypox and the course of the disease, in my opinion, infected people should be hospitalized in centers during this phase in order to ensure close-meshed and comprehensive virological, infectious diagnostics and information bundling.”

Quarantine and isolation in monkeypox

Lauterbach presented “strict RKI recommendations” on Tuesday, which had been developed together with the federal states. Those affected and contact persons should remain in isolation for at least 21 days because the incubation period of the virus after an infection is up to three weeks.

In addition, according to him, 40,000 doses of a vaccine approved in the USA were ordered prophylactically, which is effective against infection and “could be used immediately” in Germany.

On Monday, the British health authority UKHSA set three weeks as the recommended quarantine period for close contacts of infected people. Belgian authorities order a 21-day isolation for infected people. This does not apply to contact persons, they are advised to be particularly careful.

“A smallpox vaccination probably also protects against monkeypox,” says the ministry’s status report. In the Federal Republic it was compulsory for one-year old children until 1975, in the GDR the obligation was lifted in 1982. Conversely, this means that a large part of the younger population has no immune protection against smallpox. The chairman of the World Medical Association, Frank Ulrich Montgomery, is now proposing to vaccinate unvaccinated population groups against smallpox as soon as possible.

“We should primarily think of the groups that are currently particularly at risk – i.e. usually younger men with a lot of changing sexual contacts.” According to the federal government, it has stored around 100 million doses of smallpox vaccine. Of these, two million doses were donated to the World Health Organization (WHO) and stored for them. Lauterbach explained on Monday that it is currently being examined “whether we might have to make vaccination recommendations for people who are particularly at risk”.

This text first appeared on www.morgenpost.de