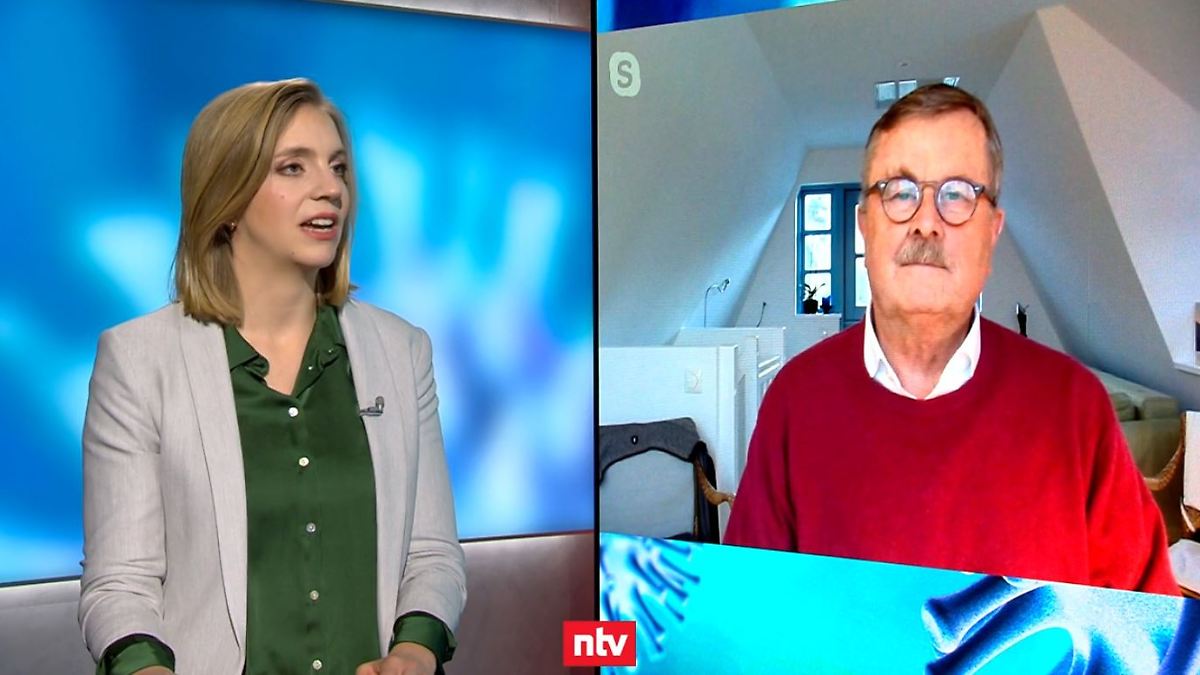 Montgomery on vaccination
“Scholz should show that he can do it”

Will vaccination be mandatory in Germany or will it be “talked about”, as Frank Ulrich Montgomery, Chairman of the World Medical Association, fears? In the ntv interview, the doctor reminded Chancellor Scholz of his political leitmotif: “Whoever orders leadership gets leadership.”

ntv: Health Minister Karl Lauterbach expects that we will have several 100,000 new infections a day in mid-February. How concerned are you about this forecast?

Frank Ulrich Montgomery: I am very concerned about that fact. The numbers are increasing rapidly at the moment and we will soon have some 100,000 infections per day. I hope, however, that with Omikron the peak of this wave will be passed sometime in February. Maybe by the end of February we’ll have falling numbers again.

If there really is such a high number of new infections, to what extent can the health system still bear it?

You must not compare the incidences of today with the incidences of a year ago. Many people are vaccinated. In the meantime, however, we also have some better therapy concepts and we have also equipped the hospitals quite well. That’s why you can’t compare it 1:1. Omikron also doesn’t seem to lead to as high an intensive workload as Delta and other variants before it. We’re really worried, but I think we can do it if people behave sensibly.

Does the government have to intervene again, possibly even with a lockdown?

Local and regional interventions will certainly have to be made. You have to differentiate again both in terms of location and age groups. At the moment it is mainly children, especially very young children, who are affected, with a very, very high incidence. And so you have to take other measures than in rural areas or something similar. In my opinion, there will not be a general lockdown, but you will have to talk regionally about local restrictions, wearing masks, restrictions on shopping and more.

With the increasing number of infections, we are now also seeing that the PCR tests are becoming increasingly scarce. They should be prioritized in the future, perhaps also according to professional groups. How do you feel about this?

The capacity is exhausted. It is not easy to generate further PCR tests now. Then you have to prioritize and talk about the fact that of course people with very severe symptoms, from certain age groups, but also those whose ability to work must be maintained or who can infect others, i.e. people in the health sector, are prioritized here. You have to look at the prioritization list again, but the basic idea is absolutely correct.

How meaningful are the rapid tests, because we actually have to use them to draw conclusions about the number of new infections if PCR tests are not used across the board?

We are urgently awaiting the list from the Paul Ehrlich Institute, which should give us the good rapid tests, which are not all as effective and efficient as we initially expected. These rapid tests are becoming very important, especially for younger people, for whom one does not directly derive hospital stays or the like. To do this, however, they have to be good and people also have to be instructed to take these rapid tests. Because there is more to it than fumbling around a bit in the front of the nose, it has to be done really well.

In Bavaria it was judged that the 2G rule in retail would no longer apply. You have criticized such judgments in the past. How do you feel about this verdict?

The judgment in Bavaria differs significantly from the ones I have criticized because it gives a clear reason why this is no longer the case. Not because Omikron is particularly harmless, as has happened in another federal state, but because it is said that the circle of retail stores that have to remain open because they fulfill primary needs is too imprecise. Items of daily use also include underwear, for example. Can you close down an entire department store because of this? This is an important question that needs to be resolved. And then you have to tell politicians again that you may not have defined what you mean precisely enough, and that this opens the door for judgements.

At the moment we are running the risk of talking about compulsory vaccination in the Bundestag. This is mainly due to the fact that the coalition is divided. “Whoever orders leadership gets leadership,” said Olaf Scholz. Now he has to show that he can do it too.

The doctors do not want to implement compulsory vaccination in their practices. What do you make of it?

I don’t share that, the doctors are very much in favor of vaccinations, they are against mandatory vaccinations, and KBV boss Andreas Gassen was absolutely correct in saying that: We will never in our lives take people against their will, who might be taken to the police, inoculate by force. That will not happen with German doctors. And I also insist that every doctor has the right to decide for himself whether he wants to vaccinate or not, these freedoms must be.

How realistic do you think it is that this compulsory vaccination can also be legally implemented?

That depends on the sanctions, whether you have to pay fines like in Austria. Then comes the interesting legal question of whether you have to pay for it once or repeatedly. I think that will be a secondary issue in Germany. But those who are not vaccinated will then have to do without certain things of everyday life. They won’t be able to fly easily, probably won’t be able to go to the theatre, cinema or something similar. And if they want tests, they’ll probably have to pay for them too.