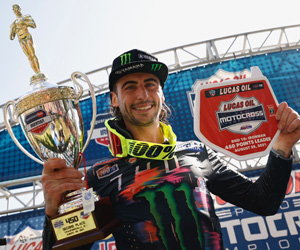 Dylan Ferrandis (Yamaha YZ450F-Monster Energy Star Yamaha) continues his effort with two events to the end of the season. The pilot Yamaha, who is having a dream season at the helm of the premier class of the American Championship, took pole position in practice, before winning the 1re round in front of Eli Tomac and Ken Roczen, while his teammate Aaron Plessinger (Yamaha YZ450F-Monster Energy Star Yamaha) snatched the Top6.

In the second, if Cooper Webb will be the first leader during the first 4 laps, it is Tomac who will provide most of the show before winning in front. Dylan Ferrandis and Webb.

2e overall tied on points with Tomac, the French increases its lead in the championship which goes to 50 points on Roczen and still 71 on Tomac 3e.

At the Builders, Yamaha takes over the leadership from Honda for 7 points and 44 on Kawasaki.

In the race, Lawrence left no chance for his pursuers, leaving Jo Shimoda and Michael Mosiman to fight for the podium ahead Justin Cooper 4e. Alone Jeremy Martin was able to challenge Lawrence’s dominance before falling heavily and ending his day.

In the second, with a new 4e place behind Lawrence, RJ Hampshire and the Japanese, Justin Cooper reached the podium overall (3e).

In the provisional, Jett Lawrence takes the advantage by 11 points on Justin Cooper. Jeremy Martin loses a position (4e).

Provisional Builders, Yamaha still leads the way with 19 points ahead of Honda and 97 over HVA.