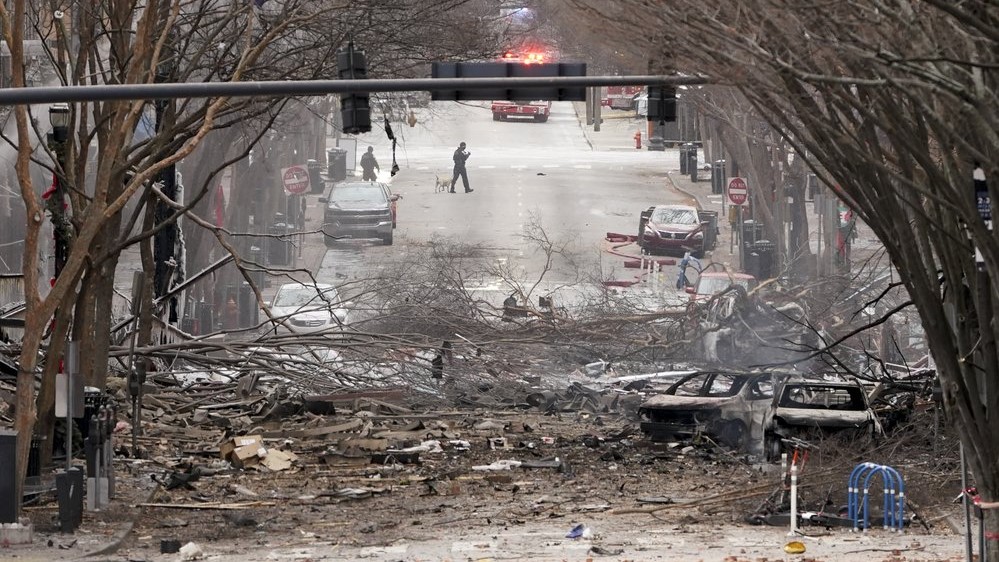 [Voice of Hope December 26, 2020](Compiled by our reporter Yuning)In the early hours of Christmas (December 25), a recreational vehicle suddenly exploded in the center of Nashville, Tennessee, causing damage to many surrounding buildings and causing widespread communication interruptions. Even the police emergency system failed to operate normally. The authorities imposed emergency airspace control on the city of Nashville.

It is reported that the explosion occurred at about 6:30 am on the 25th. At that time, there were not many people on the street. However, the shock wave caused by the explosion caused damage to many surrounding buildings. The windows of some houses were shattered and three people were injured. The US police believes this The explosion was intentional. Police said on the 25th that they may have found human bodies at the scene of the explosion.

The explosion occurred at the back of an AT&T office building, causing damage to the communication and power supply equipment in the building and causing a large area of ​​communication interruption in downtown Nashville; police emergency systems in Tennessee, Kentucky, and Alabama As a result, the Nashville COVID-19 community hotline and several hospital communication systems cannot work properly.

According to a report on the Epoch Times website, the Federal Aviation Administration (FAA) announced on the 25th that from December 25 to December 30, the airspace in the Nashville area will be designated as the “national defense airspace” and temporarily ban other flying facilities from entering the airspace .

This measure will punish the pilot who violated the regulations and break into the airspace, such as civil penalties and revoking the pilot’s flight permit. The US federal government may also initiate legal proceedings against the pilot. In some extreme cases, the US government may respond with lethal weapons.

See Also:  Woman befriends the pregnant woman and then kidnaps the newborn baby

The US Federal Aviation Administration issued a notice (NOTAM) to pilots on the 25th, stating: “If the US government discovers that an intruding flight facility poses an imminent security threat, the US government may use lethal force against the invading aircraft.”

The Nashville Metropolitan Police Department released photos of the suspicious recreational vehicle that exploded on the morning of the 26th. Several law enforcement agencies urge people who have seen the car or have information about the car to contact the Nashville Police Department’s crime reporting hotline at 615-742-7463, or online with the FBI in Memphis ( Memphis) branch contact.