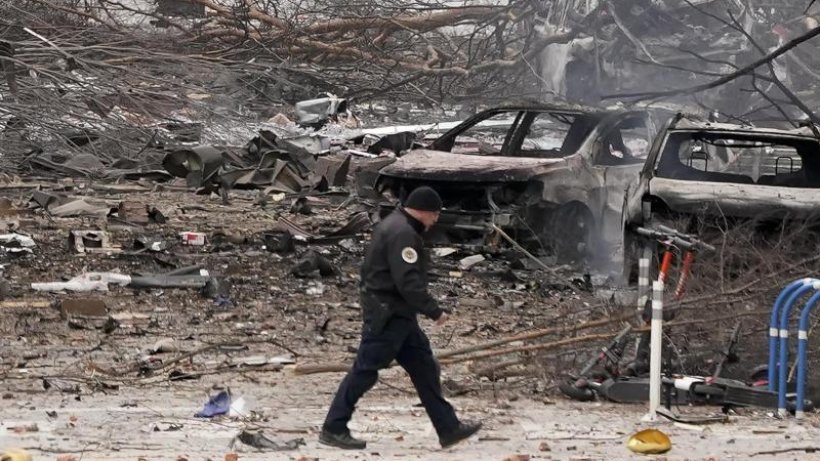 After the explosion in Nashville, Tennessee, the motif remains unclear. The alleged perpetrator died in the explosion.

Washington. Almost two days after a mysterious explosion in downtown Nashville in the US state of Tennessee the authorities speak of one Suicide bombing and believe they may have identified the perpetrator. With regard to a possible motif, however, they continue to feel in the dark. On Sunday night, police raided the Nashville home of 63-year-old Anthony Quinn W.

The officials discovered a picture of a white mobile home on Google satellite photos, and the Federal Criminal Police Office (FBI) is convinced that it is the same mobile home that exploded in the city center on Christmas Day.

Christmas at 5:30 in the morning. Mary Ellen Brown, whose apartment on the banks of the Cumberland River is a few blocks from the crime scene, is roused from sleep by loud gunfire. Police sirens sound soon afterwards. Police cars meet on Second Avenue on the edge of the old town and not far from the tourist district and the State Capitol Tennessee Capital one.

There you will find a parked, white mobile home. As video recordings from surveillance cameras later revealed, the car was parked there shortly before half past one in the morning. Background: Explosion in downtown Nashville – three injured

Soon afterwards, scenes play out like in a science fiction thriller. At exactly 6:15 a.m., a computer voice can be heard for the first time from the Caravan comes. The words “This car will explode in 15 minutes” boom monotonously from the parked car. The warning is repeated every minute: In 14, 13, 12, then 11 minutes …… there will be a huge bang, they say. Half a dozen brave Nashville Police officers rush from door to door on adjacent street blocks, trying to evacuate the neighborhood as quickly as possible.

Was the perpetrator in the mobile home during the explosion?

At half past six the voice from the mobile home sends a new message: “If you can hear this message, evacuate immediately! Evacuate immediately!” A few seconds later there was a loud bang and the car went up in flames under a glaring light. On the same evening, human tissue was found near the burned-out wreckage, in all probability of the perpetrator who died in the glowing inferno, the FBI suspects. Searches are consequently stopped immediately.

Three people are injured in the explosion and hospitalized, none of them life-threatening. In any case, the detonation devastated large parts of the old town in that traditional southern metropolis, which is known as the “birthplace of country music” and “music city”. Historic old buildings are in ruins and more than three dozen shops and companies are destroyed.

Because of the danger of collapsing buildings, the area is largely cordoned off and, according to Nashville’s Mayor John Cooper, “will be opened to pedestrians and cars at the earliest on Sunday”.

Was the explosion at AT&T?

As FBI Special Agent Doug Korneski said, “The investigations are ongoing on multiple fronts and we do not want to rule out any possible motives at this point,” Korneski said. According to one theory, the attack was in a building belonging to the telecommunications company AT and T, in front of which the caravan was parked.

The explosion paralyzed cell phone and cell phone traffic in other parts of Tennessee as well as the neighboring states of Alabama, Georgia and Kentucky. The investigators also want to determine whether the fact that Christmas Day was chosen has symbolic significance or whether it was rather a coincidence.

The FBI received more than 600 leads over the weekend. According to the Kripo, it seems certain that no mass murder was intended. So far, there is nothing to indicate a political background. On Sunday, former FBI director Andrew McCabe also joined the investigation. He cautioned not to jump to conclusions.

The detonation was so violent and the wreckage stretched over such a wide area that quick responses were not to be expected, said the former FBI chief. “In particular, we want to identify the perpetrator first,” said McCabe. After that, the investigation would focus on possible motivations. The investigators on site are flanked by behavior analysis specialists from the FBI from the training center in Quantico, Virginia.

In any case, the responsible Tennessee prosecutor Donald Cochran spoke of a “huge puzzle, the numerous parts of which we now have to put together”. Among other things, the criminal investigation department is investigating whether the perpetrator may have come from Nashville itself. Tennessee Governor Bill Lee, who toured the rubble the day after the explosion, called it “a miracle that no one was killed with such shocking damage.” Lee appealed to President Donald Trump to declare a state of emergency and provide the state with federal funds and human resources.

Donald Trump – More on the US President