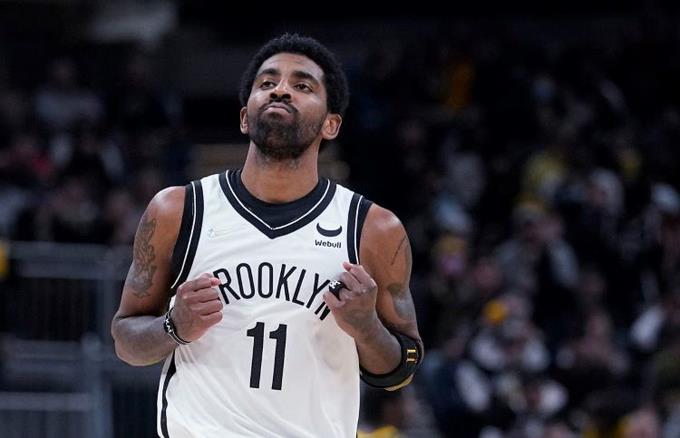 Kyrie Irving returned to the court after more than 30 games without playing due to his refusal to be vaccinated against covid-19 and contributed on Wednesday night to the victory of the Brooklyn Nets over the Indiana Pacers by 121-129.

On his return, point guard Irving contributed 22 points, 3 rebounds, 4 assists, 3 steals and a block to his team. But the best of the Nets was Kevin Durant with 39 points, 8 rebounds, 7 assists and one steal.

The most successful of the Pacers were Domantas Sabonis, with a triple-double of 32 points, 12 rebounds and 10 assists, and the substitute with a 10-day contract Lance Stephenson, with 30 points, 3 rebounds and 5 assists.

Cameroonian Joel Embiid pushed the Philadelphia 76ers to victory over the Orlando Magic, marking the fifth consecutive game for his team.

In a very even game, with 9 changes of leadership on the scoreboard, Embiid had 31 points, 5 rebounds, 2 assists and 1 block, while Tobias Harris had 22 points and Furkan KorkMaz and Seth Curry each scored 20 points.

The most outstanding of the Magic was Cole Anthony with 26 points, 5 rebounds and 7 assists.

Luka Doncic’s Mavericks beat the Golden State Warriors 99-82 on a night in which San Francisco star Stephen Curry was well below his usual performance and in which the Dallas team paid tribute to his former player Dirk Nowitzki.

Doncic was the leading scorer of the game with 26 points, 7 rebounds, 8 assists and 2 steals, while his teammate, forward Dorian Finney-Smith had 17 points, 9 rebounds and 2 blocks.

See Also:  Behind the scenes of the filming of the first Indiana Jones

For the Warriors, the leading scorer was Andrew Wiggins, who had 17 points, 3 rebounds, 2 assists, 2 steals and 1 block. Curry had 14 points, 9 rebounds, 5 assists and 1 block, but with 5 of 24 field goal attempts and 1 of 9 3-point attempts. Additionally, Gary Payton II had a double-double with 11 points and 11 rebounds.

The Charlotte Hornets crushed the Detroit Piston in a game in which the home team always dominated with the help of an inspired Kelly Oubre Jr. who made 8 3-pointers in the fourth quarter.

Oubre added 32 points, 6 rebounds and 1 block while his teammates Gordon Hayward and Milles Bridges scored 19 points each. LaMelo Ball had a double-double of 12 points and 12 assists.

For the Pistons, the most prominent was Trey Lyles, with 17 points, 7 rebounds and 1 assist.

The Minnesota Timberwolves beat the Oklahoma City Thunder in a game in which the locals held the lead throughout the game and had a 21-point lead.

For the Timberwolves, Karl-Anthony Towns stood out with a double-double of 17 points, 16 rebounds, 3 assists, 1 steal and 2 blocks, and Anthony Edwards with 22 points, 5 rebounds, 2 assists and 5 steals.

For the Thunders the best were Josh Giddey with a double-double of 14 points, 15 rebounds, 6 assists and 1 steal, and Shai Gilgeous-Alexander with 19 points, 2 rebounds and 5 assists.

With less than a second from the end of the game between the Washington Wizards and the Houston Rockets, a triple by Kevin Porter Jr., who was returning to the court after a game of suspension for misconduct, gave the visitors the victory. With the victory, the Rockets break an eight-game losing streak.

Christian Wood, who had missed the last game for the same reason as Porter Jr., added a double-double of 22 points and 11 rebounds, while Jalen Green also scored 22 points and Eric Gordon added 19. Jae’Sean Tate had a double double of 13 points and 10 rebounds.

The best in Washington was Bradley Beal with 27 points, 5 rebounds and 5 assists. Kentavious Caldwell-Pope scored 26 points and Kyle Kuzma 24.

The San Antonio Spurs defeated the Celtics thanks to Dejounte Murray’s 22 points (with 9 rebounds, 12 assists and 3 steals) and the 17 scored by both Devin Vassell and Derrick White to end a 4-game losing streak for the Texans .

Jaylen Brown, who had just scored 50 points against Orlando, was once again the most outstanding of Boston, adding 30 points, 6 rebounds, 1 assist, 3 steals and 1 block.

Dennis Schröder had 15 points. Marcus Smart added 14. And the Dominican Al Horford had 4 points, 7 rebounds and 5 assists in 27 minutes.

The Toronto Raptors defeated the Milwaukee Bucks without their starting coach, since Mike Budenholzer caused a loss due to the covid protocol, and led by a Pascal Siakam who added 33 points, 5 rebounds, 6 assists, 3 steals and 1 block. OG Anunoby and Gary Trent Jr. each scored 22 points.

The Bucks, who did not have Greek Giannis Antetokounmpo due to an illness not related to COVID, had Khris Middleton as the leading scorer, with 25 points, followed by Jordan Nwora with 17. Jrue Holiday had a double-double of 15 points and 12 assists and DeMarcus Cousins ​​another 15 points and 10 rebounds.

The Denver Nuggets lost to the Utah Jazz at home in a game in which the visitors were up 13 points. Bojan Bogdanovic stood out with a double-double of 36 points, 13 rebounds, 4 assists and 1 steal.

The best of the Nuggets was Nikola Jokic with a triple-double of 26 points, 21 rebounds, 11 assists and 2 blocks.

The Atlanta Hawks beat the Sacramento Kings in a tight game in which they were tied up to 6 times.

Kevin Huerter led the Hawks with 25 points, 11 rebounds, 5 assists and 1 steal. He was helped by Cam Reddish, with 18 points, Danilo Gallinari, with 16, and Delon Wright, with 15.

De’Aaron Fox was the best of the Kings with 30 points, 2 rebounds, 6 assists and 1 steal.

The Miami Heat beat the Portland Trail Blazers in a game in which the visitors built a 19-point lead in the second quarter.

The leading scorer for the Trail Brazers was Anfernee Simons with 28 points, 1 rebound and 7 assists. Norman ¨Powell had 26 points and Jusuf Nurkic had a double-double of 14 points and 13 rebounds.