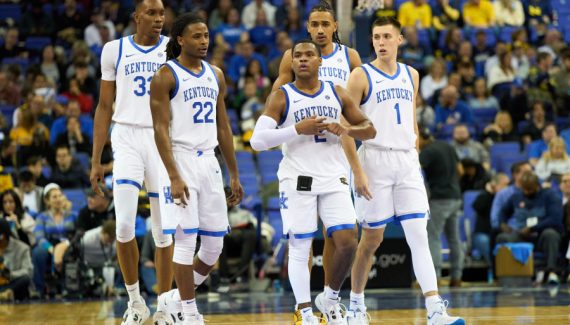 Basketball USA offers you for the occasion a preview of each conference of the “Power Six”, the six major conferences of the NCAA first division: ACC, Big East, Big Ten, Big 12, SEC and Pac-12.

And after l’ACCthe Big Eastthe Big Tenthe Big 12 and the Pac-12we loop these previews today with the SEC.

A very high-level conference last season in the regular season, since four teams finished with a positive record (Auburn, Tennessee, Kentucky et Arkansas), and five others had a balanced balance sheet (South Carolina, LSU, Florida, Texas A&M et Alabama with 9 wins and 9 losses). In other words, the difference in level between the different programs of the conference was very often very small, thus leaving room for a contested and undecided regular season in the middle of the table.

The problem, however, is that the SEC collapsed during “March Madness”: LSU and Kentucky fell in the first round, Tennessee and Auburn in the second round. In fact, only Arkansas delivered a very good tournament, notably eliminating Gonzaga in the third round of before giving in in turn against Duke, at the gates of the “Final Four”.

– A New Era at LSU. Will Wade dismissed last spring after five seasons at the head of the Tigers, it is Matt McMahon, former coach of Ja Morant at Murray State, who took over at LSU. The technician, who had to rebuild his workforce from A to Z since only the rear Adam Miller was back, is the architect of the renewal for the Bâton Rouge program, who wants to turn the page on the previous episode, marked by accusations of fraud against the former coach. After a month in this 2022/23 season, McMahon’s first year is in any case off to a good start: 7 wins in 8 games. A record to be placed in context of course, namely that the Tigers have not played any ranked team since the start of the season, but the fact remains that the Louisiana squad, under the impetus of a very good Adam Miller returned from his cruciate ligament rupture (16.9 points on 47% on shots), plays pleasant basketball, and will certainly be a mid-table team to keep an eye on this season in the SEC.

– A “make or break” season for Kentucky. Indeed, John Calipari’s squad has been on a slippery slope for two years: there was a season of 9 wins and 16 losses in 2020/21, then an elimination in the first round of the “March Madness” against the unlikely Saint Peter’s last season. In other words, Kentucky has clearly been underperforming since the health crisis (15 wins and 3 losses and a first place in the SEC when the season was interrupted, in March 2020), and this 2022/23 fiscal year then appears to be everyone’s season. issues for the Lexington program. Either “Coach Cal” and his men set the record straight with a successful regular season followed by a long run in “March Madness”, or they fail to get out of this quicksand in which they have been stuck for almost 24 months, and the program will then find itself seriously in the bottom of the wave. So far in this 2022/23 season, the Wildcats (16th in the Top 25 this week) are giving various signals, with for example a nasty loss against Gonzaga but a satisfying victory against Michigan, which makes them difficult to gauge as that conference games have not started. The next few months will therefore be decisive as to the judgment to be made on the “Big Blue Nation”, and the expectations and the pressure are in any case important around John Calipari and his team this season.

– Arkansas and its “freshmen”, the touch of glamor. In the NBA, we are used to talking about a “League Pass team” to talk about a fun and dynamic team, which gives satisfaction on the screen for the general public. This season in the SEC, this team will certainly be Arkansas, 9th in the Top 25 this week. Carried by their exciting trio of ultra-athletic “freshmen” (Nick Smith Jr, Anthony Black et Jordan Walsh) and their veteran fullback Ricky Council IV author of the best season of his career (18.4 points, 3 rebounds and 2.7 assists), the Razorbacks started the season on their feet, with 8 wins in 9 games, in the face of moderate adversity (a win and a loss against teams ranked in the Top 25). The conference calendar will therefore represent a good test for this young group, uninhibited and confident in its chances of dominating the SEC this season, and above all irresistibly endearing.

– Missouri and its explosive ambush attack? After the first month of this 2022/23 season, the Tigers sit in 4th place in the NCAA Premier League in pace standings with an average of 74.4 possessions per game, and 12th in offensive rating with 114.1 points scored. out of 100 possessions. In short, “Mizzou” has an ultra-efficient attack, which largely explains a start to the season without any defeat (9 wins in as many games).

So much for the facts. Now, the projection, and the obligation of a contextualization: the Tigers, if they certainly won their first 9 games, however did not play any team ranked in the Top 25, and even more broadly no team appearing in the Top 100 of the best “net rating” of the first division. Hence the obligation to ask whether Columbia’s program can duplicate this success in the SEC, a conference with an infinitely higher level of play than that of Missouri’s opponents after this first month of competition: five teams (Tennessee, Kentucky, Alabama, Auburn and Arkansas) are among the top 20 net ratings this season.

Despite everything, such an effective attack is never the result of chance, and it’s a safe bet that Mizzou will be able to annoy more than one team this season in the SEC. Behind the Kentucky – Arkansas – Tennessee – Auburn – Alabama group which clearly seems to stand out, the Tigers will be in ambush.

Considered the best player in the “freshmen” promotion this season, the Arkansas point guard is more broadly one of the players to follow across the country, not just the SEC.

A racy striker, capable of creating his shot and finishing at altitude thanks to his consistent athletic qualities, he will be a highlight machine and the center of the Razorbacks’ attack. Above all, he is quite unanimously considered a future Top 5 choice for the 2023 Draft, which makes him a player that the NBA franchises, and more broadly the entire NBA planet, will follow very closely.

After three games this season (he missed his team’s start to the season with a knee injury), he has 12.7 points, 2 rebounds and 2.7 assists.

For the title in SEC this season, we leaned for a long time for Arkansas, but finally bet on Kentucky, in the obligation to react after two disappointing last seasons.

The Wildcats’ start to the season is not particularly impressive, but John Calipari’s squad seems to us to be the team with the highest ceiling in the SEC, especially in defense (5th best defensive rating in the country, with 87.4 points against out of 100 possessions). Moreover, their best player Oscar Tshiebwe is not yet at 100% of his physical abilities, while Sahvir Wheeler and Jacob Toppin have not yet found their stride.

On paper, Kentucky has the best rosterand that just might make the difference.