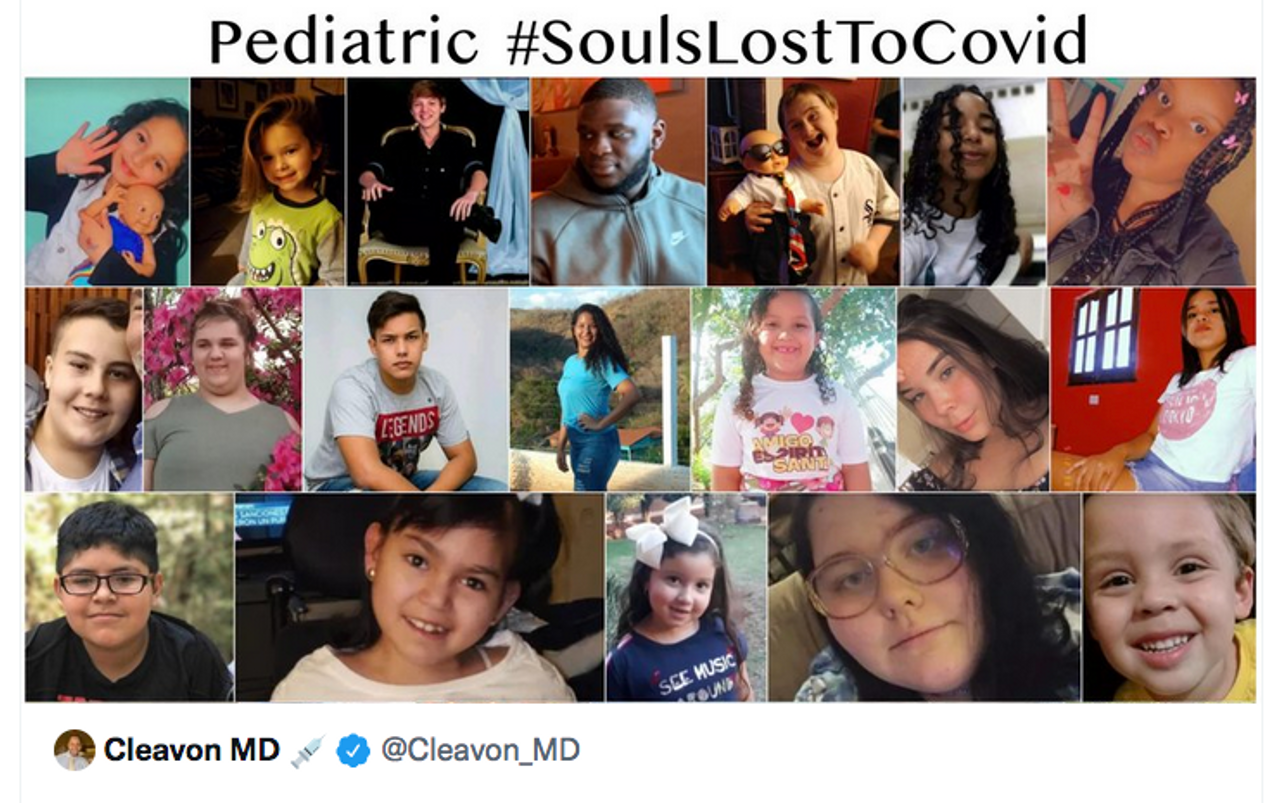 Nearly one million American children were infected with COVID-19 last week, according to statistics released Tuesday by the American Academy of Pediatrics (AAP). The 981,488 new pediatric cases break previous records. That’s four times the number recorded during last year’s winter peak, three times the number of new cases recorded two weeks earlier, and a 69 percent increase from the week ending May 6. January, when the number of cases jumped by 580,000.

The exponential jump in pediatric cases was accompanied by almost 2,000 new child hospitalizations last week, double the growth in the number of children fighting for their lives in hospital beds compared to the week former. As pupils were forced back into schools after the Christmas holidays, cases soared, as expected, but the unprecedented scale of the situation is bringing disaster systems to a halt. nationwide health. In just two weeks, the United States has seen 11 percent of all pediatric COVID-19 infections to date.

The death of a child is the most unspeakable horror, a horror that now strikes many American families every day. According to the Centers for Disease Control and Prevention (CDC), the total number of pediatric deaths now stands at 1,127, while the AAP puts the figure significantly lower at 762. Data from the CDC and the AAPs are suffering from the willful lack of reporting from state and local health departments and the refusal of the Biden government to make these numbers mandatory.

In response to the horrific reality they face in overcrowded and poorly ventilated schools that are now hotbeds of infection, students have organized themselves to try to save their lives and those of their families, teachers and their community by walking out across the United States, from New York to Chicago, from Boston to Oakland and Redondo Beach, California, over the past week.

As a result of the remote work action led by brave Chicago teachers, more and more educators are demanding the closure of unsafe schools and creating Educator Safety Committees across the country. More and more of them want to break the shackles of the American Federation of Teachers (AFT) and the National Association of Educators (NEA), which demand passive compliance with the Biden government’s school reopening policies.

Among the children whose lives were prematurely cut short last week was 17-year-old Taigan Bradford. A senior at Kalamazoo Central High School, she died on Tuesday, January 11, after a nearly two-month battle with COVID-19. Taigan had planned to enroll at Kalamazoo Valley Community College to become a nurse after graduating.

After his death, Taigan’s mother urged the district to close the buildings and return to concurrent virtual learning. She told local outlet MLive that her daughter often tells her about other students who don’t wear their masks properly at school or on the bus. Bradford pointed out that schools cannot track the number of positive cases or properly maintain building cleanliness. Kalamazoo Public Schools reported 64 new cases among students and 13 cases among staff on January 17, bringing the total number of cases to 875.

In South Dakota, a second child has died of COVID-19 in the past two weeks. A boy aged zero to nine from Minnehaha County died on Tuesday, January 18. The previous week, a baby less than a year old from Pennington County died. The state has only recorded 27 cases of Omicron, but has already lost two young children.

Not only is there chronic underreporting of cases and deaths across the United States, but those deaths are often not recognized until weeks or months later. Among the cases reported last week was the October death of a Houston child, listed as “under 10” and the city’s youngest victim of the virus. She is one of 4,000 Houston residents who have died of COVID-19.

10-year-old Stephen Wagner, a fourth-grade student from Maryland who played the viola in his elementary school’s ‘Strings and Chorus’ band, and who enjoyed trucks, fishing and bowling, has just been reported dead. . Stephen died on December 27 from complications related to COVID. “He made friends very easily, he had a lot of friends. [Il était] much appreciated by all of its teachers and school staff,” said Bob Mosier, Anne Arundel County Public Schools spokesperson.

On Tuesday, the Erie, Pa., health department also announced that a teenager had died of COVID-19, the first pediatric death from COVID-19 in the county. The hospital that treated the unnamed teenager has admitted 13 children with COVID-19 so far in January, more than in previous months, while Erie County hospitals are treating more COVID patients overall -19 than at any other time during the pandemic. The county’s 14-day rolling average of daily COVID-19 hospitalizations set a record Wednesday, at 126.1.

The wave of childhood infections and hospitalizations is now happening across the United States, with the West seeing the most dramatic rise in cases in the past week. According to CALmatters, California now has nearly 850,000 COVID cases in children ages 0-17 since the pandemic began. Among them, 44 died, the equivalent of an entire school bus full of children. Pediatric hospitalizations surpassed records set during the surge last winter, reaching a peak of 90 pediatric admissions in one day on Jan. 4, according to the California Department of Public Health.

Child deaths are also on the rise internationally. A child in Calgary, Canada, aged five to nine with no pre-existing conditions, is one of 23 COVID-19-related deaths in the past three days reported by the province of Alberta. , where the number of hospitalizations soared to more than 1,000. Doctors in that province say the highly infectious Omicron variant is sending more children to hospital than in previous waves. UNICEF has reported a total of 12,300 pediatric deaths worldwide, acknowledging that this figure is grossly underestimated due to a general lack of reporting worldwide.

It is both ruthless and criminal that the Biden government, unions and the media offer the public endless lies about “school safety”, “mild illness” and the claim that “there is no has no money” to financially support the population during a confinement to stop the spread of the virus.

The need to get the truth out was emphasized by Dr. Mark Kline, Chief Medical Officer of New Orleans Children’s Hospital. The latter told NBC News: “It seems that people have tried to hide the importance of the disease in children. We have spent two years dispelling the myths relating to COVID and children, that it is “harmless” to children. This is not the case”.

According to a recent study co-authored by Kline, about half of children hospitalized with COVID-19 needed respiratory support, and almost a third ended up in intensive care. The study also noted that a third of the 915 patients were otherwise healthy, with no underlying health conditions that would have put them at greater risk.

Long-term health degradation associated with long-lasting COVID is estimated to affect up to one in seven children. On January 14, the CDC further published a study on the increased risk of diabetes in children who survived the COVID-19, which concludes that “the increased risk of diabetes in people under the age of 18 after COVID-19 highlights the importance of COVID-19 prevention strategies in this age group.” This is an ominous warning due to the long-term implication of diabetes on overall health.

Doctors across the country are sounding the alarm. The brief statements that follow paint a picture of the prevalence of the disease and the intensity of the fight by medical professionals to save lives against all odds:

Dr. David Kimberlin, co-director of the division of pediatric infectious diseases at the University of Alabama at Birmingham, told NBC News: “The case rate in my part of Alabama is like a rocket. It reflects the amount of virus present in the community. With this, we will see the number of hospitalizations increase”. The number of children hospitalized with COVID-19 in Alabama continues to set new records as cases in K-12 schools soar. Last week, there were 16,035 new cases in Alabama schools, a 445 percent increase from the previous week.

Dr. Chethan Sathya, a pediatric surgeon at Cohen Children’s Medical Center in New York City, told NBC that “literally every child” he and his team operated on or otherwise treated over the weekend tested positive for COVID-19. 19.

At Texas Children’s Hospital in Houston, positive cases among patients rose from zero in early December to 70 a month later, chief pathologist Dr. Jim Versalovic told the Texas Tribune. He added that child hospitalizations broke all previous pandemic records, and did so at “dizzying speed”. He cautioned against the idea that Omicron is less serious for children, saying, “We can’t say the disease is less serious for children because it’s too early to tell.”

The fight to close schools and save lives is now at the center of the class struggle in the United States and around the world. Unions have proven to be stalwart accomplices of Democrats and Republicans alike overseeing the homicidal campaign to reopen schools. To end unnecessary infections, hospitalizations and deaths of children, educators, their families and communities, the growing network of rank-and-file committees established independently of unions and capitalist political parties must be extended to every school. and county. Sign up below to get involved.