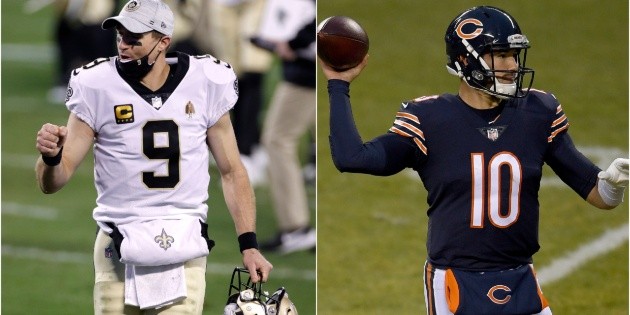 Until Week 17 of the regular season NFL 2020-2021 we had to wait to know the six crosses defined in the Wild Card Round, one of them being the duel between New Orleans Saints y Chicago Bears.

Once the crossing is defined, what remains is to prepare the match to be played next week , where only one will advance to the Ronda Divisional while the other must continue to see the playoffs from the couch at home and resign until the next campaign.

At this junction, Drew Brees and company look like favorites to continue on his way to the decisive match to be played in February, but as in this sport the ball is an ovoid, it is not known where it will bounce.

On the one hand we have the Saints of Brees, team that posted a regular season record of 12 wins from four falls to become champions of the South in the National Conference, while their rival, los Bears they did the same with eight wins and the same amount of setbacks to get in a surprise way thanks to the Los Angeles Rams triumph over Arizona Cardinals.

Finally, the table is set to learn how the way to the super bowl It gradually clears up, while the football party reaches a point not suitable for the heart in its decisive stages.