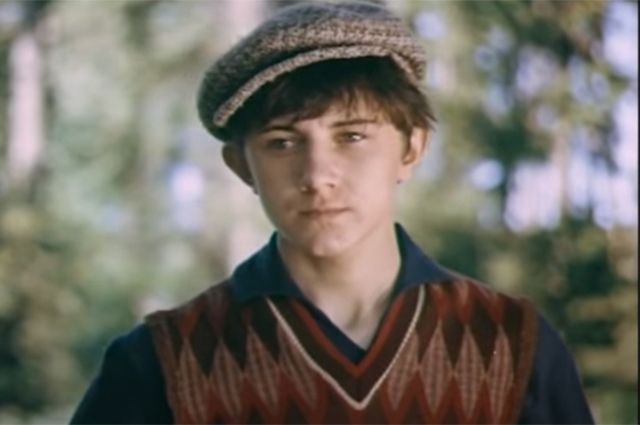 The young soldier miraculously survives the destruction of the ship by German aircraft. Alone, he tries to get to his own across the endless ice desert of the White Sea. But the Hitlerite pilot who destroyed the plane is obsessed with the idea of ​​ending the tenacious Russian.

Talent from the Palace of Pioneers

The war drama “Twice Born” was remembered by everyone who has ever seen this not the most famous picture. Largely due to the brilliant work Georgy Drozdwho played the German pilot, and Vyacheslav Baranov, who played the role of a rookie soldier Andrei Bulygin.

For the film “Twice Born” Baranov was awarded the prize of the All-Union Youth Festival. By that time, there were already almost a dozen roles in the actor’s career. Critics predicted a bright future for Vyacheslav, because he showed himself well in various roles.

He was born on September 5, 1958 in Chisinau, but soon the family moved to the Far East. Then there was another move, this time to Moscow. In the capital, Slava began to study at the Theater of Young Muscovites in the Moscow Palace of Pioneers on the Lenin Hills.

It was there that Baranov was noticed by the director’s assistants. Leonid Nechaev, future creator of “The Adventures of Pinocchio” and “About Little Red Riding Hood.” The first tape of Nechaev — “Adventures in a city that doesn’t exist” — was a kind of experiment in which the heroes of the most popular children’s books participated at the same time.

Vyacheslav was chosen for the role of Gavrosh, and he did not disappoint. And a year later Baranov starred in his first leading role in the film “What’s going on with you?” Unlike Nechaev’s film, this was no longer a fairy tale, but a serious story about the problems of growing up.

After that, Vyacheslav confidently went to enroll in a theater university and … failed. True, the confusion did not last long — through the dobor, he broke into VGIK.

In 1976, the first film adaptation of the cult story took place in 36 years Arcadia Gaidar “Timur and his team”. They took on the role of the main character Anton Tabakov, and Vyacheslav Baranov became the main “villain”, the hooligan Kvakin.

Before graduating from VGIK, the young actor played in another school drama — “Schedule for the day after tomorrow”, where he worked with Oleg Dal and Margarita Terekhova.

The 1980s became a golden time for Vyacheslav. There were many roles, and very different ones. For example, the audience remembered his lieutenant Eroshin in the film “The battalions are asking for fire.” And the children’s audience of that time knew him as a physical education teacher nicknamed “Ilya Muromets” from the fantastic film “Guest from the Future”.

By the way, Baranov will meet with Alisa Selezneva again — in The Purple Ball he will play Captain Green.

VGIK fellow students recalled that Vyacheslav never had a reputation as a seducer. But at the same time, the girls were drawn to him — he attracted them with responsiveness, kindness, disinterestedness.

In 1983, Baranov starred in the drama Pavel Chukhrai “Cage for canaries”. His partner was an 18-year-old debutante Evgenia Dobrovolskaya. The story of troubled adolescents came out bright, heartbreaking, despite the fact that Vyacheslav actually turned 25 years old.

The relationship on the set continued in life — soon Baranov and Dobrovolskaya became husband and wife. In 1986, they had a son, who was named Stepan.

To help his wife, who was terribly afraid of ruining her career, Vyacheslav took care of his son. But, despite this, a year later, Eugene divorced him.

See Also:  Pictures from Alaska and Canada in Kranichfeld | Weimar

Years later, in an interview with Express Gazeta, Baranov said: “I took on the main burden, I filmed a lot on purpose to enable my wife to graduate from college normally. And then we decided to divorce. For what reason — it doesn’t matter, but there were no betrayals. I don’t know if it was possible to glue everything together if there were enough brains. Although, I think we would have parted anyway. “

I gave myself without a trace

Dobrovolskaya herself said about parting with her first husband: “It seemed to me that he was interfering with me. I felt sorry for Slava – a good, kind guy – and freed him from myself. “

Vyacheslav, after the divorce, tried to devote all his free time to his son, especially since his mother, busy with her career, had almost no time for this.

Then absolutely amazing things will happen. — when Dobrovolskaya has a son from the second barrack with an actor Mikhail Efremov, Vyacheslav will take him to theaters, circuses, zoos with Stepa.

In the early 1990s, Baranov marries a second time and takes care of his sick son from the first marriage of his new passion. But in these relations, Vyacheslav never found happiness.

The actor tried to do everything so that his loved ones did not need, so he took on almost all the roles that he offered. Many of them simply did not correspond to Baranov’s talent, “diluted” the audience’s impression of what he had done before.

In the 1990s, when the offer of roles was reduced to a minimum, Vyacheslav focused on dubbing.

His voice was spoken by Dr. Emmett Brown in Back to the Future, Yoda and Luke Skywalker in Star Wars, Gollum in The Lord of the Rings, Jarvis in Iron Man, General Bertino in Taxi and many, many others.

See Also:  Zhigunov is suing the film company over a series for Channel One

In the early 2000s, Vyacheslav again began to receive invitations to roles. Basically, of course, it was about serials, but Baranov did not refuse to work. However, in 2010, he, who had never complained of difficulties, suddenly confessed to his friends that he was suffering from pain in the spine. True, this time he did not go to the doctors, believing that these were the consequences of endless work on scoring, where he had to stay in an uncomfortable position for hours.

But before the New, 2011, the actor became so painful that he nevertheless decided to go to the doctor. After the examination, Baranov was diagnosed — kidney cancer, stage 4.

I never grumbled about fate

The actor had an operation to remove the kidney, but the prognosis was still disappointing. Accustomed to always helping others without thinking about himself, Vyacheslav Baranov reduced his social circle, not wanting to burden his friends with his misfortune. Nevertheless, those who were aware of his illness did what they could. Thanks to this, the actor lived for another year and a half, while after the operation he was given no more than six months.

Vyacheslav Baranov spent the last days of his life in a hospice. On June 20, 2012, he was gone. The artist was buried at the Khovanskoye cemetery of the capital, next to his mother.

To my friend, actor Vadim Andreev, already knowing about the fatal diagnosis, he said: “We did not live the worst life with you. There is something to remember. “