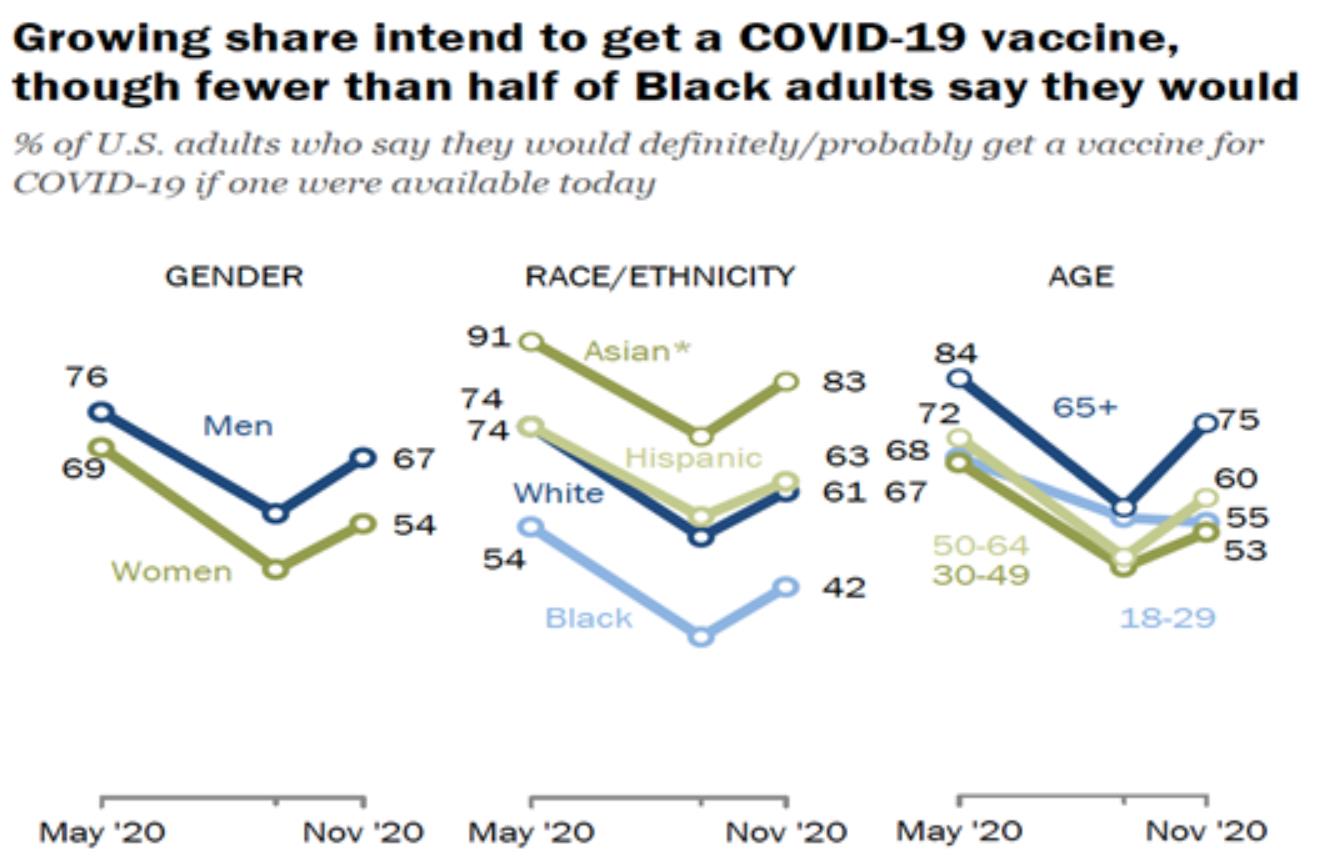 The resistance of African Americans to vaccines is not only due to considerations of vaccine safety, but also related to cases of racial discrimination in the history of American medical and health care. So far, many African-Americans are still hurt by racial discrimination in the American medical system, and the road to equality during the epidemic can be described as “difficult”.

△Pew Research Center data show that among African Americans, less than half are willing to be vaccinated

Between 1932 and 1972, the U.S. Department of Health and Human Services conducted an experiment in Tuskegee, Alabama, with the purpose of “better understanding the natural course of disease (syphilis).” The experiment tracked 600 low-income African Americans in Tuskegee, 399 of whom had syphilis. 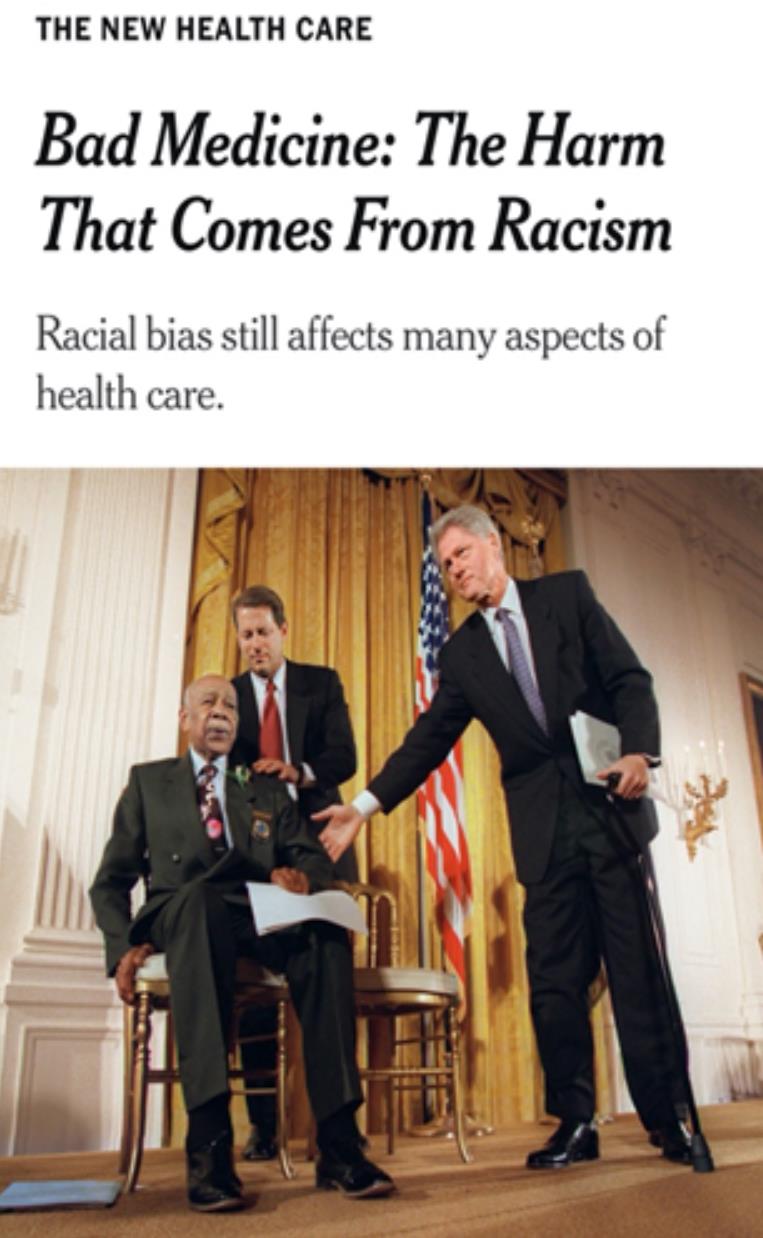 As a result, many African Americans spread syphilis to their families without knowing it, and eventually led to the death of many innocent lives. This “criminal study” was finally stopped until it was exposed by the media in 1972.

See Also:  Maxi López made an unfortunate comparison between Wanda Nara and her current partner

Harvard University Medical History and Science History Professor Alan Polant said: “This experiment exposed not only the pathological problem of syphilis, but also the social problem of racial discrimination in the United States.” The New York Times commented that after the experiment, the trust of African Americans in the American health care system gradually collapsed, and other medical and health efforts were lost because of this failure.

According to the research of American economists Marcela Arsan and Marian Wanamaker, African Americans are generally less likely to seek help from the American medical system than whites, and are more likely to be younger due to lack of treatment. He was killed when. In addition, analysis shows that one-third of the life expectancy gap between black and white Americans can be attributed to the failure of trust caused by the Tuskegee experiment.

In addition to the painful memories brought about by the “dark history”, the reason why African Americans are resistant to vaccines also stems from doubts about the safety of vaccines. The New York Times interviewed Dennis Rankin, a 55-year-old African American. She admitted that she was full of doubts about the safety of the vaccine because she saw on social media that people had facial nerve palsy after being vaccinated, which made her especially Worry about the potential side effects of the vaccine. 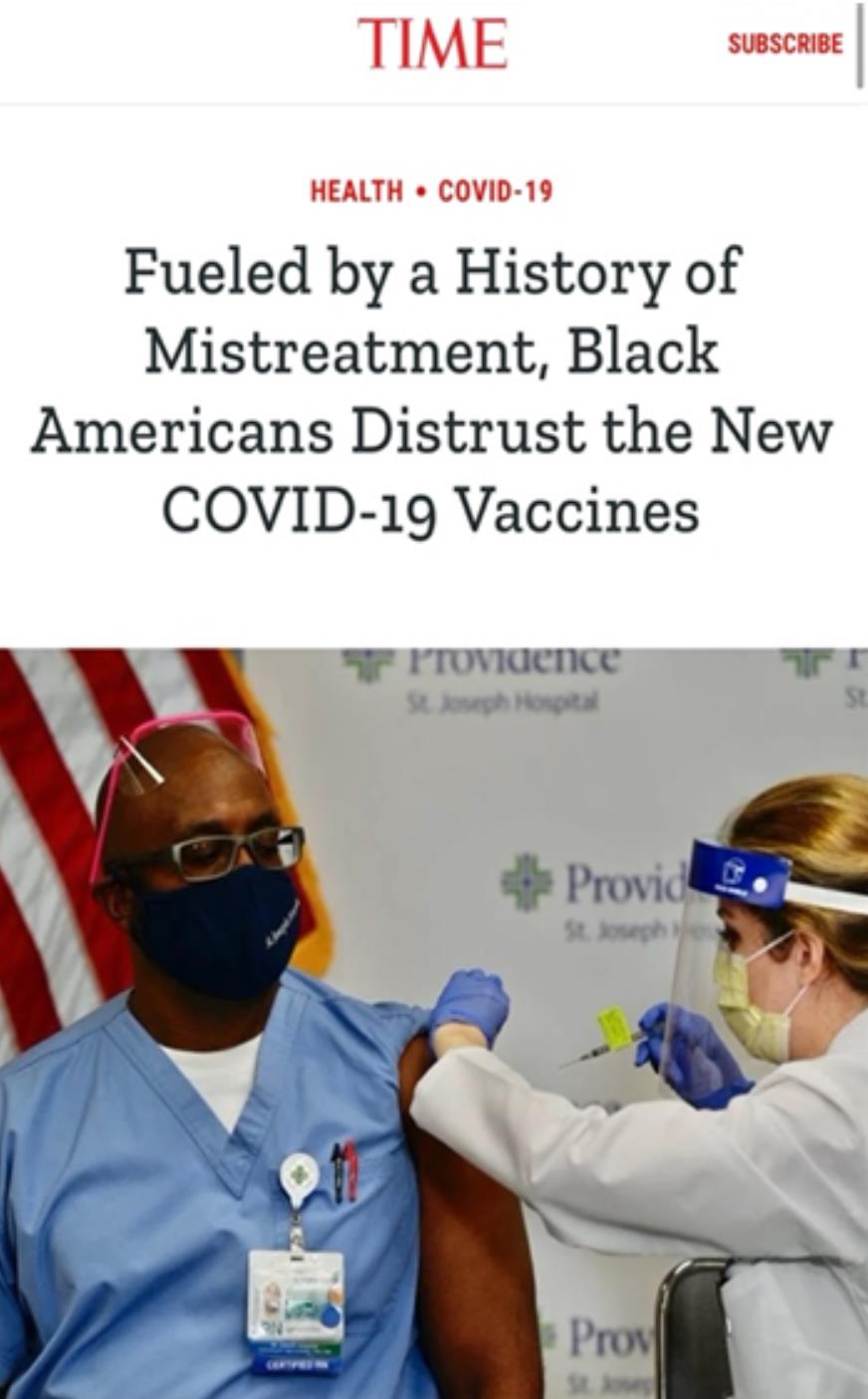 △ The US “Time” magazine stated that because of historical unfair treatment, African Americans have a distrust of the new crown vaccine

In addition, according to a survey jointly initiated by the Caesars Family Foundation and The Undefeated.com, 70% of African Americans believe that when they seek help from medical institutions during the epidemic, they will be The race was “unfairly treated”, which severely hit them physically and mentally, and intensified their resistance to the medical and health system. The survey pointed out that African Americans are the most hesitant group when vaccinating the new crown vaccine, and their concerns about the safety of the vaccine are increasing.

It is the above reasons that make it difficult for African Americans to accept the new crown vaccine. Data show that only 10% of the 350,000 Americans registered to participate in vaccine clinical trials are African or Latino. The combined population of these two groups accounted for 31.9% of the total population of the United States. However, more than half of the newly diagnosed patients in the United States are from these two groups. Even with such a high infection rate, a survey by Time magazine in the United States shows that only 35% of African Americans say they are sure or possible to get the vaccine.

Racial discrimination is deep in the medical system

In fact, the quality of medical resources received by African Americans is still far lower than that of whites. In terms of cancer and AIDS treatment, prenatal care, and disease prevention, they can only silently accept discriminatory treatment by the American medical system. In addition, African Americans are more difficult to obtain treatment for cardiovascular disease than whites, and they are also more likely to receive unnecessary physical amputations. 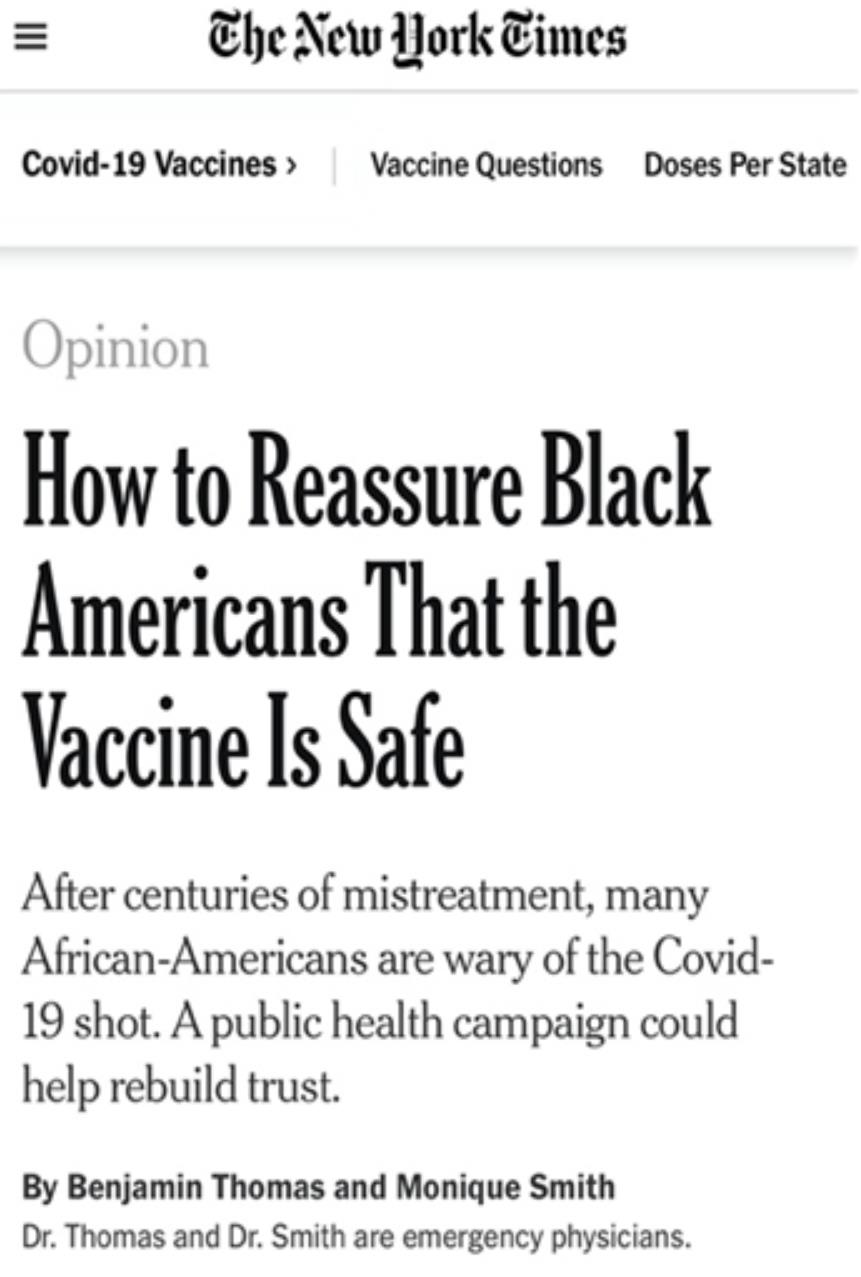 Not only that, African descent is still the most important group affected by sickle cell disease, but the disease has received far less attention in the medical field than other diseases, which has also triggered scholars from all walks of life to ponder the issue of racial equality in medical research. Evelyn Hammonds, an expert on the history of science at Harvard University, said: “In American history, the health of blacks has never been equal to that of whites-discrimination and differences are hidden in the medical system.”

“Historic” racial discrimination in the U.S. medical system still threatens the lives and health of ethnic minorities. The difficulty of seeking medical treatment and treatment for African-Americans during the epidemic has further exacerbated the “sense of tearing” in American society. And differentiation. In a soil full of discrimination, the road to fight the epidemic in the United States has become increasingly difficult.