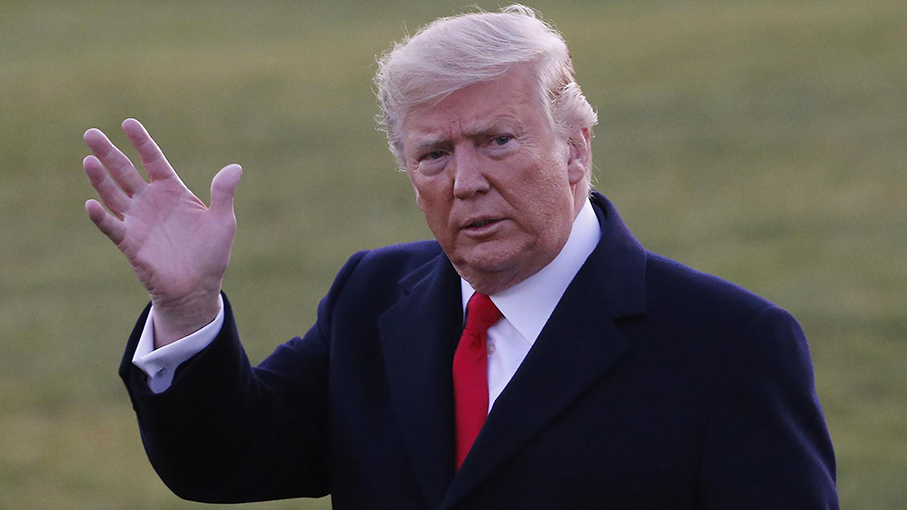 [Voice of Hope June 16, 2021](Comprehensive report by our reporter Zhong Xuan)Former U.S. President Trump (Trump) announced on June 15 (Tuesday) that he has accepted the invitation from Texas and will join Texas Governor Greg Abbott on an official visit to the southern United States on June 30 (Wednesday). border. He also criticized the current border policy of the Biden administration.

Trump said: “The Biden administration inherited from me the strongest, safest and most secure border in U.S. history, but in just a few weeks, they turned it into the worst in U.S. history. Border crisis.” He said that the United States has now gone from “detention and deportation to arrest and release”.

“We went from having border security that the world envied to become a poor lawless border where the whole world is now. Biden and Harris handed control of our borders to human traffickers, criminals, and coyotes. Drug dealers, MS -13 gang members, human smugglers, sex dealers and criminals in the world can now freely arrange people to enter the United States.” Trump said.

He continued: “Hospitals and schools were crushed, public health was sacrificed, all of this was to serve the radical left-wing anti-border agenda. Our brave border officers and brave ICE officials were illegally prevented from working. Our country It is now a huge asylum city, and even dangerous criminals are released in the United States every day.”

Trump criticized the current administration by saying: “If it is not bad enough, Biden and Harris will not even inspect the endgame they have created, nor will they come down to see the Border Patrol and ICE heroes who risked their lives to defend our country. Now the White House. It has made their work’completely impossible’.”

He believes that what Biden and Harris have done to the US border, and continue to do, are serious and deliberate dereliction of duty. He said: “My visit is expected to expose these crimes against our country-and show to the amazing people of ICE and the Border Patrol that they have our unshakable support.”

Governor Abbott recently told the Breitbart Texas News that Texas will immediately begin building border walls in areas where immigrants such as Del Rio can easily cross and have no security.

Abbott also said that efforts to resolve the border crisis have become one of the governor’s top priorities. He announced on Twitter on Tuesday: “The Lone Star State will do what Biden refuses to do-protect our citizens on the southern border.” And he chose to make a statement in the Del Lair area because of “the illegal border crossing incident in this area.” Increase rapidly”.

He also said on Twitter: “The Texas Border Conference brought together local officials and residents to discuss immediate solutions to the border crisis.” “Drugs, gangs, human trafficking, these are not things you can laugh at. It’s not just showing the photos to Congress.” “Texas is doing everything to protect the security of the border and restore order.”

A report in May of this year said that compared with the same period in 2020 during Trump’s administration, the number of border patrol arrests has soared by nearly 700%. “U.S. Customs and Border Protection (CBP) officials reported that agents arrested more than 172,000 immigrants on the U.S.-Mexico border.”

See Also:  4 questions about this disease that affects children in Europe and the United States

According to CBP’s Acting Commissioner Troy Miller, the Biden government has exempted unaccompanied minors and many family units from the Chapter 42 regulations, and almost all single adults from Spanish-speaking countries will still be exempted. Deported immediately. However, the Border Patrol has also encountered more illegal immigrants from non-Spanish countries, especially Brazil and Haiti. Miller stated that these people were not deported.

In addition, the border patrol also discovered that in May of this year, more than 51,000 people sneaked into the United States without being arrested.

Trump implemented Article 42 of the United States Code in March 2020, effectively closing the border and prohibiting “non-essential” travel. He also tried to ease the spread of the Chinese Communist Party (CCP) virus in the United States through this move.

To stop illegal immigration, Texas wants to spend $1 billion to build its own border wall

Governor of Texas: I’m doing what Biden should do at the Texas border