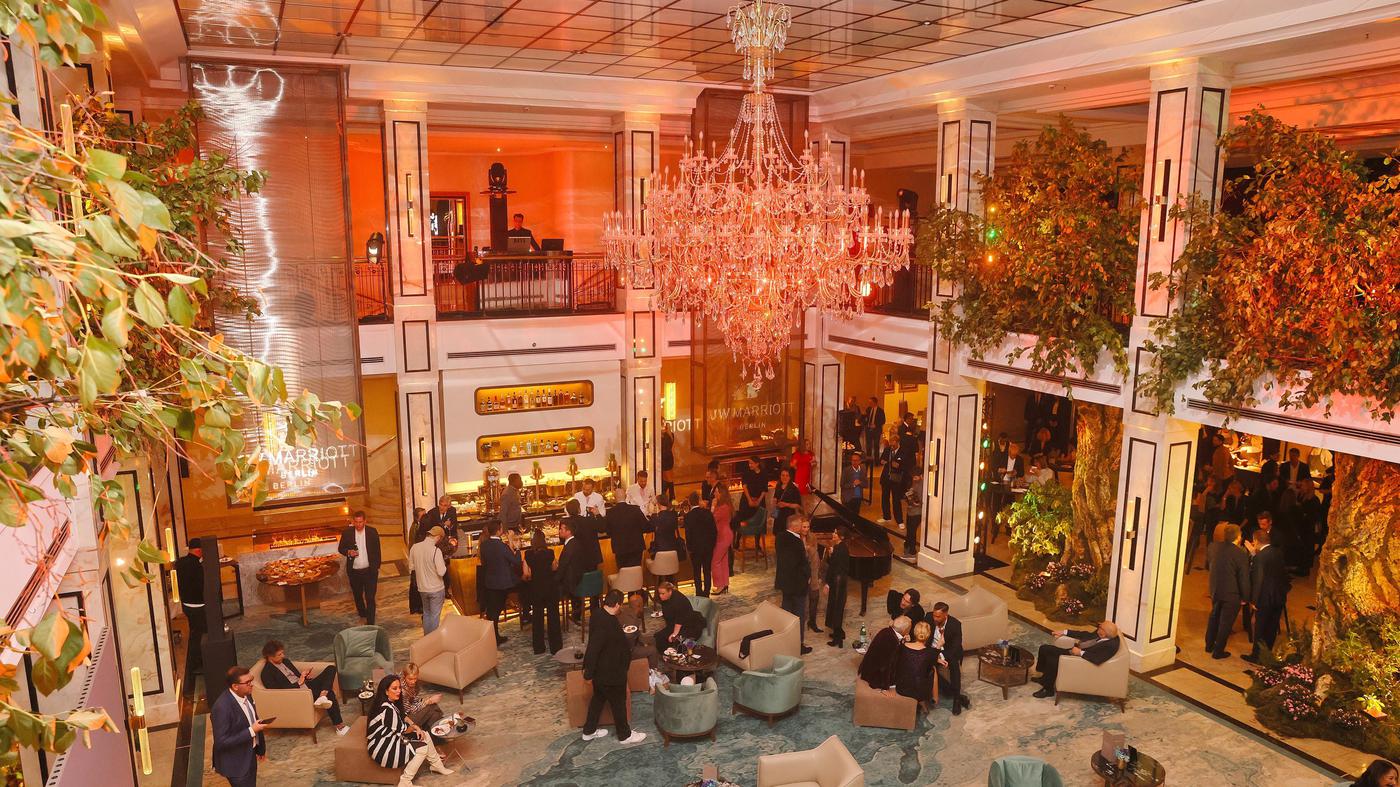 Berlin’s large hotels are preparing for the time after Corona – and are raising great expectations of the future flow of guests. After the complete renovation of the “Berlin Berlin” hotel on Lützowplatz, the Marriott Group is now also flying the flag: The former Maritim am Tiergartenrand, which has belonged to Marriott since the end of 2020 and was temporarily managed as the “Hotel Berlin Central District”, has been operating since the beginning of 2020 year as an upgraded “JWMarriott”.

There was a lot of pomp and ceremony on Monday – the house should not be completely finished until 2025, when the 400 or so rooms, which are still in their old condition, have arrived in the desired condition. In the past two years, 94 rooms on the top fifth floor and larger parts of the public areas have been redesigned.

“JW Marriott” – these are the initials of the company founder J, Willard Marriott, who started with two motels in the US state of Maryland in the early 1950s. This is still the headquarters of the company, which is currently the largest hotel group in the world with almost 8,500 hotels worldwide under 30 brands.

Affordable luxury is the goal

In Berlin, the hotel ranks within the group between the luxury house Ritz-Carlton and the business hotel Marriott, both on Potsdamer Platz – “affordable luxury” should be the goal. So far there is only one other J.-W.-Haus in Frankfurt/M. Marriott has a management contract because the building itself is owned by a Qatar-based hotel real estate group.

Although the building was only opened in 2005 under Maritim management, a major renovation backlog had already opened up. The neo-art deco style of the interior was controversial from the start, and the Maritim group maintained typical design features such as neo-baroque chairs, shiny wooden panels, dark blue carpets and brass fittings that were more early 1990s. Each room also had bathtubs that are no longer up-to-date, are no longer wanted by the guests and are now to be gradually replaced with spacious showers.

On the upper floor and in several areas of the hall you can already see the new, lighter, deliberately non-pompous style, which is characterized by floral inspiration from the zoo next door – in general, the intention was to make the zoo more present in the design.

A bar was installed in the central lobby, which used to be largely deserted, in which afternoon tea will be held in the future. The Bar26 with cigar lounge, which quickly fell into oblivion after a brilliant start in 2005, has also already been revised. The focus of daily work is the 48 congress and conference rooms around the largest hotel ballroom in the city, which is designed for 2300 guests. The boss in the house is General Manager Aramis Gianella-Borradori.

The gastronomy should attract more locals

What does all this have to do with Berliners? A lot, says Marketing Director Maria Hoffmeister, who has put the opening of the house to the city on her to-do list – despite initial efforts, those responsible at Maritim ultimately did not succeed. The classic means is gastronomy, which was previously only used by hotel guests and employees of the Ministry of Defense.

The most important place for this is the large restaurant with a terrace facing Stauffenbergstraße, which is now open daily from 12 p.m. until late at night „JW Steakhouse“ is managed, albeit by a kitchen director with significantly higher ambition: Friedemann Heinrich, most recently “Executive Chef” at the Marriott in Doha, has been in the house for a good six months and is primarily geared towards the contemporary goals of sustainability and climate protection.

He attaches great importance to processing everything himself as far as possible and therefore also buys complete cattle. At the large breakfast buffet in the “Market” restaurant, he has done away with the ritual smoked salmon and instead serves regional dishes such as smoked sturgeon or salmon trout from the Fläming region.

More about hotels in Berlin

Berlin? Berlin Berlin. How the city’s third largest hotel on Lützowplatz is reinventing itself The future of Neukölln New construction projects should make the Berlin district more attractive

This is another culinary detail that is new in Berlin „Whimsy“, a multimedia dinner with elaborate projections, which is offered from Friday to Sunday with a five-course menu at prices between 129 and 199 euros per person. Chef Heinrich goes a little further and offers dishes such as “Grilled scallops, pulpo, balsamic vinegar, salty algae, saffron”, the ingredients of which can sometimes come from further afield. After all, the “Berlin Baking Company”, which is open all day, is proud of the fact that all baked goods are made in-house. A hotel as a piñata – the competition will look at it with interest.