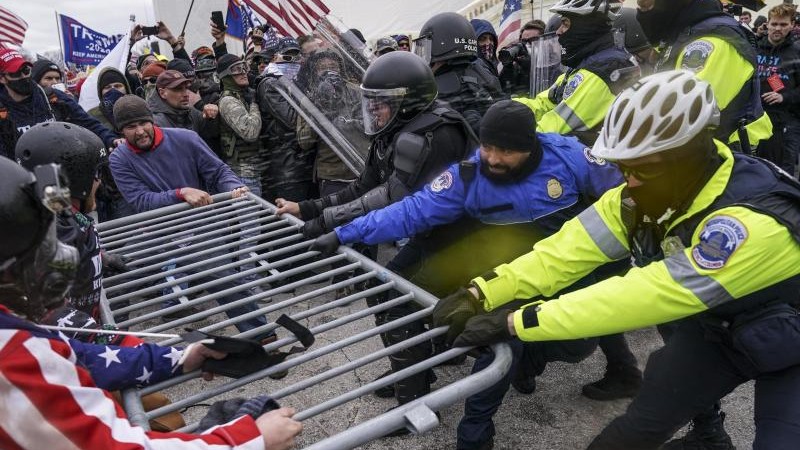 Washington (AP) – Almost a year after the attack on the Capitol in Washington, a court has imposed the harshest sentence to date against a supporter of then President Donald Trump.

Federal judge Tanya Chutkan sentenced 54-year-old Robert P. to more than five years in prison in the US capital on Friday. The man had hurled a fire extinguisher at police officers, among other things. In total, more than 700 people have been charged in connection with the attack on Parliament on January 6th.

Five people were killed in the attack on the seat of the US Congress a few days before the official change of power in the White House. The storm at the heart of American democracy, in which many MPs and senators feared for their lives, shook the United States. Trump had previously incited his supporters in a speech.

After the storm he had to face impeachment proceedings. In the end, the Republican was acquitted. To this day, he does not want to come to terms with the defeat against the Democrat Joe Biden.

According to the verdict, Robert P. now has to go to prison for a total of 63 months. Two other attackers had already been sentenced to long prison terms in November. A gym owner was sentenced to 41 months in prison. There were also 41 months against a man whose picture had gone around the world at the time: The “shaman” from Arizona with the headdress made of fur and horns became one of the faces of the attack.

In the Robert P. case, prosecutors accused the defendant of throwing a wooden plank at the police officers, spraying them with a fire extinguisher, and then throwing the empty container at them. According to reports from US media, including the Washington Post, the defendant said he was very ashamed of his behavior today.

Prior to this, P. had written in a letter to the judge that he had recognized that Trump and his allies had lied to their supporters by “spreading the wrong story about a stolen election” and demanded that “it was our duty to do the job.” Stand up to tyranny “. (…) He went on to write: “I didn’t realize that they were the tyrants who wanted to stay in power at all costs.”

Judge Chutkan said in the verdict, following a CNN report, “Every day we hear reports of anti-democratic groups and people planning potential violence in 2024.” It must be clear that the attempt to prevent a peaceful change of power is an attack on the law enforcement authorities and will be punished.

In addition to the preliminary investigation and indictments, the background to the unprecedented attack is also being dealt with in Congress. An investigative body in the US House of Representatives has summoned various former Trump employees. However, several refuse to cooperate. Trump’s former chief strategist Steve Bannon must therefore now answer in court. The same threatens Trump’s former chief of staff, Mark Meadows.