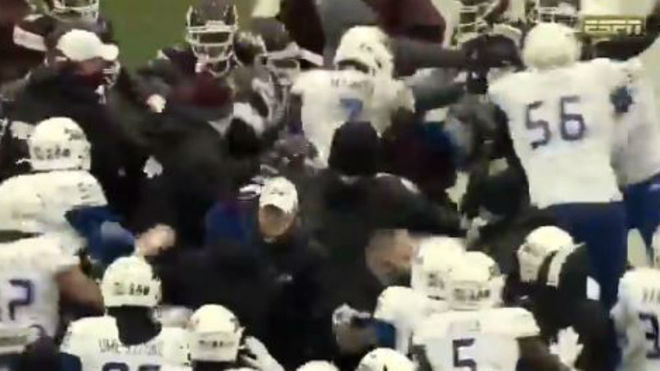 EThe video is going around the world. The universities of Mississippi State and Tulsa faced each other for the Armed Forces Bowl, but the football game ended in a pitched battle between players from both football teams. Kicks, shoves, chases, punches … The images are embarrassing.

Behind the 28-26 Mississippi State win over Tulsa, the confrontation began in the salute in midfield and ended up with dozens of players from both squads, including those on the bench, punching each other. The brawl began with a blow from a Tulsa player to a Mississippi State person who was not in uniform. The referees and part of the technical bodies tried to end the brawl, although without success.

A massive brawl broke out at the end of the Lockheed Martin Armed Forces Bowl between Tulsa and Mississippi State. pic.twitter.com/zfaq912SWU

Malik Heath, from Mississippi State, starred in one of the most embarrassing images to hitting an opponent while on the ground, then running away. He is a promising player who could get into the NFL draft, although the sanction that falls to him by this incident can leave him out. In addition to the kick, you risk a serious penalty for hbrag about it on instagram, in a story that he later deleted.

Malik Heath seems very proud of himself for kicking a man on the ground and then running awaypic.twitter.com/ZqmUkOHS5q

The defender of the Golden Hurricane, Kendarin Ray, had to be helped off the field after apparently sustaining an injury during the fight. Tulsa coach Phillip Montgomery noted after the game that he believes Ray suffered a concussion.

See Also:  Loss of a child, infidelity and death of her husband. What Elizabeth Taylor endured in seven marriages

The strange thing about this situation is that Bulldogs coach Mike Leach was not in the midfield salute, but taking a selfie with a group of fans from Mississippi State when the fight started.

“It’s silly. The reason for everything is silly, no matter what it was. The root was silly and the continuation was silly. I clearly classify it in the category of fool. Now how it started I’m not sure“the coach told ESPN after the game, in addition to saying that some Tulsa players were saying things from the start of the game.