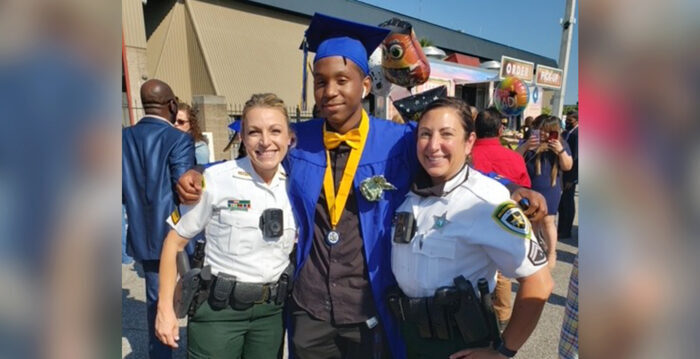 When a Florida high school senior crashed into a sheriff’s car in a traffic jam, the officer had a surprising response. Instead of accusing him, she reassured the grieving teenager.

Furthermore, he decided to go above and beyond his duty and accepted an invitation to the young man’s graduation the next day.

Sergeant Kara Vance was driving on Interstate 4 on May 27 when the traffic in front of her suddenly stopped, according to a Facebook post from the Hillsborough County Sheriff’s Office (HCSO). However, Quintin Montgomery, a Jefferson High School senior who was driving behind the officer, was unable to stop in time and rear-ended the police car.

Then Vance got out of his vehicle and approached Quintin, who panicked.

“A lot of things went through my mind,” the senior told HCSO on an interview after the incident.

“Quintin thought he was going to jail,” public HCSO on Facebook. “Sergeant Vance sat with him for a while to reassure him and, of course, tell him it wasn’t.”

It was an accident, the agent said; Quintin was neither speeding nor distracted, and neither driver was injured in the minor collision.

After chatting with Vance and his colleague, Corporal Andrea Davis, who was also on the scene, Quintin regained his composure and made them an invitation: Would the officers like to attend the graduation ceremony the next day?

Eager to congratulate the senior, Vance and Davis decided to go. Pictures were taken with Quintin in his cap and gown, verifying his well-being and wishing him the best for the future.

“Not all police officers are bad, so they cannot be judged because they wear a badge,” He said Quintin.

“This is what we do, this is what we live by,” Vance concluded. “We live for these little moments when you make a small impact (…) in someone’s life.”

Thousands of netizens reacted to the HCSO news, and hundreds left comments supporting the unexpected friendship.

“I love stories like this!” Wrote a Facebook user, agreeing with the sentiments of many. “Congratulations, Quintin! And thanks to Sergeant Vance for ‘humanizing the badge’ in such a special way! “

How can you help us to keep reporting?