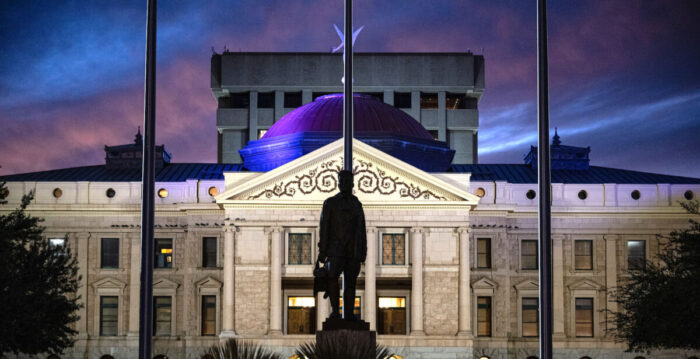 Protesters calling for disenfranchisement and election theft rallied near the Arizona State Capitol Friday, demanding that the certification of the 2022 election scheduled for November 28 be halted and that a few new elections in December, according to local media.

“We are talking about serious voter suppression,” outgoing Republican state senator Kelly Townsend from Mesa told a crowd outside the state Capitol Friday morning, according to The Arizona Republic.

Around 200 people took part in the demonstration, some carrying flags and others holding signs claiming the elections had been stolen, according to the news outlet.

“Where is our recourse with the Legislature?” asked Townsend, who on Wednesday served a summons to Maricopa County officials demanding information on Election Day issues. The subpoena is unenforceable without a vote of the Senate.

These are claims about voter disenfranchisement related to polling place issues in Maricopa County, made by some voters and some Republican candidates who lost their elections to Democratic opponents.

Ink problems with the printers prevented ballots from being accepted by the tabulating machines, leading to a number of invalid votes or people abandoning the process after trying to cast their ballots.

“Thousands, possibly tens of thousands of voters on Election Day in Arizona were disenfranchised and unable to cast their ballots due to the unacceptable incompetence of Maricopa County. This election needs a replay,” said Rep. Paul Gosar (R-Ariz.) in a post on social media.

Maricopa County elections officials have acknowledged there were problems at the polls on Election Day, but insist the problems were corrected and voters were not disenfranchised.

Maricopa Board of Supervisors Chairman Bill Gates said at the time that “no one is being deprived of their rights … and none of this indicates fraud.”

One of the suggested solutions to the tabulation problem was for voters to put their ballots in a box to be counted later.

Some poll watchers have said poll workers mixed up counted and uncounted ballots at the end of the night, according to a lawsuit filed by Republican Arizona gubernatorial candidate Kari Lake against Maricopa County.

“Given the instances of misprinted ballots, the mix of counted and uncounted ballots, and long lines that discourage people from voting, as demonstrated by the accompanying statements, these records are necessary for Plaintiff to determine the full scope of the identified issues and their impacts on voters,” Lake’s lawsuit says, of 19 pages.

Lake’s opponent, Katie Hobbs, a Democrat serving as Arizona’s secretary of state, leads in the race.

The Republican gubernatorial candidate’s lawsuit asks the court to force Maricopa County to produce the records before the canvass, scheduled for November 28.

Lake said on Steve Bannon’s “War Room” that Maricopa County is “trying to run out of time,” referring to the upcoming canvass. She has not acknowledged defeat.

Maricopa County did not respond to an earlier request for comment, but the chairman of the county’s Board of Supervisors, which is controlled 4-1 by Republicans, said in a statement that the meeting to count the elections will be held on November 28, as scheduled.

“There will be no delays or games; we will scrutinize in accordance with state law,” Gates said.

Certification votes are also scheduled for Monday in five other counties, including two where Republican supervisors voted earlier to delay certification of the election.

The Arizona statewide canvass is scheduled for December 5.

With information from Zachary Stieber.

© The Epoch Times in Spanish. All rights reserved. Its reproduction is prohibited without express permission.

Why do we need your help to fund our news coverage in the United States and around the world? Because we are an independent news organization, free from the influence of any government, corporation or political party. Since the day we started, we have faced pressure to silence ourselves, especially from the Chinese Communist Party. But we will not fold. We depend on your generous contribution to continue practicing traditional journalism. Together, we can continue to spread the truth.