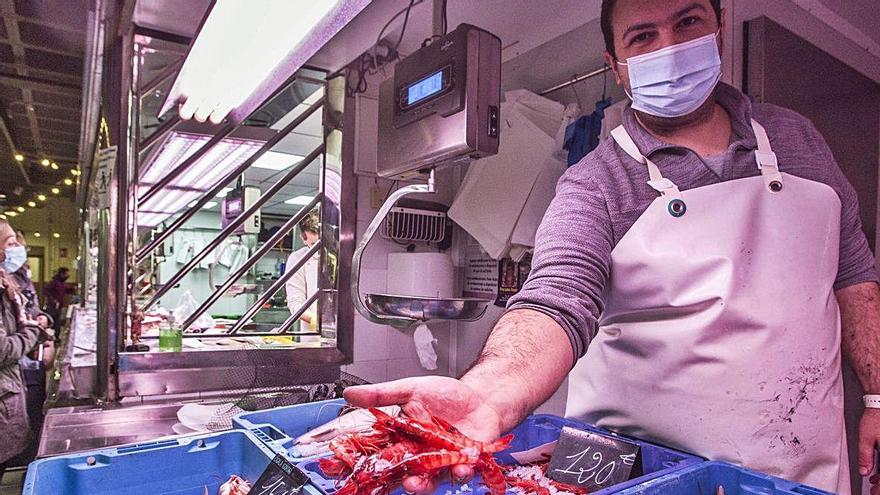 Two of the seafood vendors that offer red prawns and crayfish in the Central Market of Alicante at 120 and 150 euros per kilo. The most expensive crustaceans sold out.
PILAR CORTÉS

Say goodbye to a disastrous year like coronavirus and welcome hopeful 2021 with Red shrimp of Xàbia, Dénia, Villajoyosa O Santa Pola it is not available to anyone. By price, almost 300 euros per kilo, and because the specimens are counted this Christmas. Fish sellers agree that behind the few catches are the storms of the last weeks, that prevent the boats from going away to the fishing grounds. And also the earthquakes: since the seismic movements more frequent in waters of Mediterranean they cause their migration to increasingly distant points.

For this reason, the few kilos of select red shrimp on sale in the markets of Alicante for New Years Eve they flew. Three kilos in the case of Mariscos Jesús, who took them out to the counter at seven in the morning and in half an hour did not have one. At 290 euros per kilo, he did a good business, with “fresh prawns, caught last night in Santa Pola, and crayfish same. The color of fresh seafood is very noticeable because there is a lot of it frozen, ”the pleasure warned as he showed one of the few remaining crayfish specimens, weighing 155 grams. This crustacean is also through the roof, which has sold at 270 euros per kilo. It also offered bay shrimp at 140 euros per kilo.

Two of the seafood vendors that offer red prawns and crayfish in the Central Market of Alicante at 120 and 150 euros per kilo. The most expensive crustaceans sold out. PILAR CORTÉS

“People order and pay for it, they are looking for quality. There are people who prefer to eat four prawns or four good scampi than a kilo of frozen, “said the seller, Jesús López. Delicacies that the rest of the year are around 100 euros but that skyrocket in price around these Christmas dates.

“Since we started setting up the stand this morning we have people. I have the best red shrimp in the market ”, pointed out María Jesús Bas, owner of the stall of the same name, who also sold the scarce merchandise obtained at 290 euros per kilo the median. Last year he sold the fattest one at that price. This year it does not have: if it had been offered, its cost would have risen to more than 300 euros. In his case, in a few hours, 9 kilos of the select product were shipped, all on request. «The clientele pays for it. This year it is more expensive because there is hardly any shrimp, and the same is the Norway lobster, which costs 200 euros plus expenses, which is stupid. ” The seafood seller explains that one of the factors behind the scarcity of this type of crustaceans, which they began to notice two years ago, is temporary, “But also that there have been many earthquakes that have moved everything, and the prawn has disappeared.”

Those who have not been able to access the fresh red prawn from the bay or the crayfish opted for the one from Almería and Huelva, around 150 euros per kilo; or for the frozen, although in Domingo Martínez’s position they were sold out twenty days ago, and that offered six sizes with a range of prices between 30 and 80 euros per kilo. The Alaskan leg, at 37 euros per kilo, also ran out of place. Evaristo López has sold a lot of oven fish, sea bass, sea bream and turbot from aquaculture raised in Galicia for New Year’s Eve, “at 15 euros a kilo for four people a good oven fish.” The Market Dealers Association expects a 15% sales increase this holiday season.