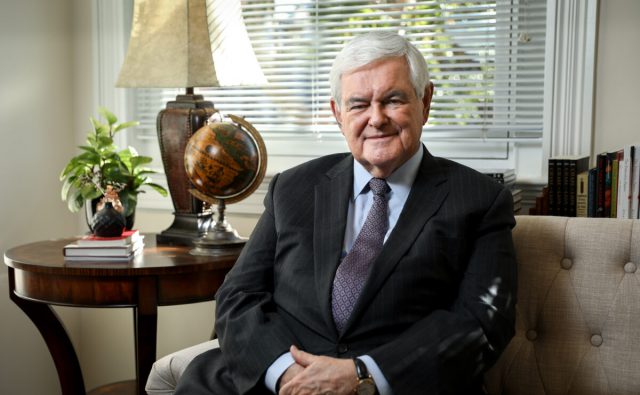 Former House Speaker Newt Gingrich says it’s likely the Republicans will win the midterm elections in November. He speaks of a maximum possible gain of up to 7 seats in the Senate and 50 seats in the House of Representatives.

At this point, a podcast from Podcaster will appear. Please accept the marketing cookies by clicking on the following button in order to listen to the podcast.

Republicans could see big gains in both houses of Congress in November, says Newt Gingrich. He was Speaker of the House of Representatives from 1995 to 1999.

“I would say we will gain three to seven seats in the Senate; and 20 to 50 seats in the House of Representatives, most likely 44″, Gingrich told the Epoch Times.

With Election Day approaching in November, Democrats’ optimism seems to be waning. That’s because Republican candidates are seeing increasing success at major events across the country.

Republicans in New Hampshire, Arizona, Pennsylvania and Georgia are catching up

In New Hampshire, Republican challenger Don Bolduc has narrowed the gap between him and Democratic Senator Maggie Hassan to 2 points. The Oct. 20 poll commissioned by Bolduc’s campaign puts Hassan at 49 percent and Buldoc at 47 percent. The distance is within the four percent error tolerance.

In Arizona, Republican Senate candidate Blake Masters, who is backed by Trump, is gaining popularity after initial weaknesses. The opinion research institute “RealClearPolitics” forecast a tie for the state. It only forecasts a 2.5-point lead for the Democratic incumbent.

In Pennsylvania, Deputy Governor John Fetterman’s double-digit lead has evaporated in recent weeks. A recent poll gave Fetterman a 48 to 46 percent lead, which is also within the margin of error of 4.4 percent.

In Georgia, too, Democratic Senator Raphael Warnock’s lead over Republican candidate Herschel Walker is dwindling. A recent Landmark Communication poll showed a tie of 46 percent, while an InsiderAdvantage poll gave Warnock a mere 2-point lead, back within the 4.2 percent margin of error.

“Almost across the country, the polls show that Republicans are closing in,” Gingrich said. In his opinion, the Democrats are to blame for this.

Fighting crime is a voter concern

Crime, inflation, border security and woke politics are all issues that work against Democrats, Gingrich said.

“If you have some kind of crazy Left Democrats who think you don’t need jails and that you can fix things by just being nice to killers, I think the average person thinks that’s just crazy.” he said. He referred to the crime problems in New York.

For gubernatorial candidate Lee Zeldin (New York), who made crime a campaign issue, the issue was very present on October 9th. Back then, two minors were wounded in a shootout in front of his porch while Zeldin’s two 16-year-old daughters were inside.

Zeldin, who was campaigning at the time, said a bullet landed about 30 feet from the kitchen table where his two teenage daughters were doing homework.

Lee Zeldin, the Republican nominee for governor of New York, speaks at a rally in Queens, New York City on October 22, 2022.Photo: Still from video by NTD

In his almost daily press conferences, Zeldin highlights the crime crisis in the city and his opponent’s failure to deal with that crisis. This brings him closer and closer to Democratic governor Kathy Hochul in the gubernatorial campaign.

The gap was already narrowing to the low single digits, positioning him for a possible coup victory in a deep blue state.

Hochul, under political pressure, announced a plan with New York City Mayor Eric Adams on Oct. 22. They want to hire another 1,200 officers to fight crime in transit.

Inflation, crime and immigration are the key campaign issues for Republicans. In a handful of recent polls, these are the issues voters are most concerned about right now.

House Speaker Nancy Pelosi on Oct. 18 called a New York Times/Siena poll an “outlier.” It revealed that the economy and inflation were voters’ top two concerns. Pelosi, on the other hand, believed that “abortion” was voters at the top.

“I can tell you that women’s concerns about their freedom are still very, very important when it comes to how they’re going to vote,” she told MSNBC. “It depends on who’s going to vote,” Pelosi said. She also added that she assessed her party’s chances as “pretty good”.

However, the abortion issue is unlikely to help Democrats as much as Pelosi and other Democrats believed, Gingrich said.

“Republicans are winning the argument about who is less extreme,” said the ex-House Speaker.

He cited the position of Warnock, the Georgia Democratic senator who describes himself as a “pastor of freedom of choice.” Warnock tried to portray his challenger Walker’s life-affirming attitude as extreme. However, he himself did not comment on whether he advocates any limits on abortion.

Walker said during an Oct. 14 debate that he agrees with the state law. This prohibits abortion after six weeks, but allows exceptions for rape, incest and the life of the mother.

The abortion issue is actually one that “isn’t helping Democrats as much as they think it is,” he added.

“Because their activists are so involved and donate so much money, they feel like it’s a good issue for them. But if you look at the country beyond the hard left of the Democratic Party, it’s not having any positive impact on them at all.”

This article originally appeared on theepochtimes.com under the title: “EXCLUSIVE: GOP Could Gain Up to 7 Seats in Senate, 50 Seats in House, Gingrich Says“ (editorial editing il)