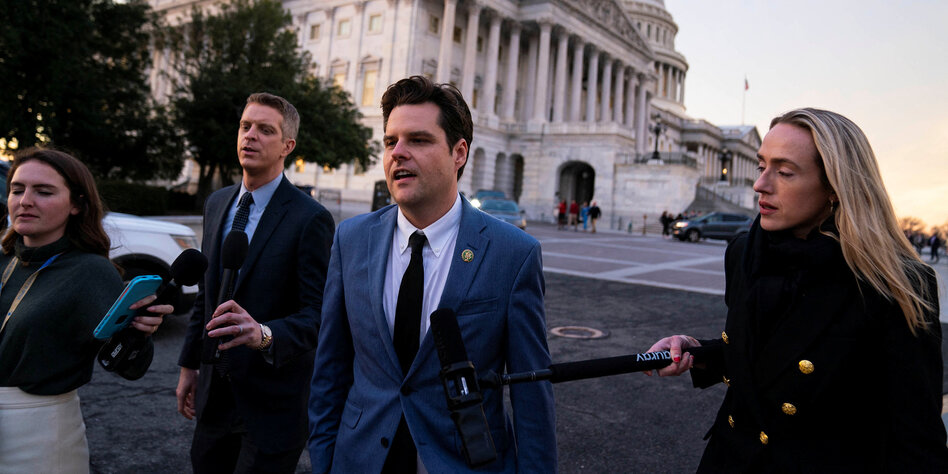 20 Republicans block Kevin McCarthy’s election as speaker. Who are the deviants and what do they want?

BERLIN taz | A rebellion by less than two dozen Republicans blocked the US House of Representatives. The explanation for why these folks banded together to block longtime Republican minority leader Kevin McCarthy from being elected Speaker of the House isn’t all that clear. There are different groupings and subsets of subsets that act as a block.

Of the 20 MPs who voted against Kevin McCarthy on Tuesday and Wednesday, 19 belong to the so-called Freedom Caucus. This is a group of MPs formed in 2015, most of whom were elected to the House of Representatives in the 2014 midterm elections, backed by the Tea Party. The Freedom Caucus is considered the far-right parliamentary grouping in the US Congress, although during the Trump administration there were various attempts by members to create even more right-wing coalitions.

The Freedom Caucus itself, however, is larger than the 20 who are now opposing McCarthy, including around 50 MPs. True, the group’s former and current leaders, Andy Biggs of Arizona and Scott Perry of Pennsylvania, are the loudest spokesmen against McCarthy. But the majority of members vote for McCarthy, with a few standing quite prominently on his side, most notably the notorious Marjorie Taylor Greene, who has made a name for herself as a QAnon devotee and fanatical Trump supporter.

She complained on former Trump strategist Stephen Bannon’s internet show this week, “Bannon’s War Room“, Biggs, Perry and Rep. Matt Gaetz would simply try to carve out political posts for themselves with their opposition to McCarthy. That speaks for violent trouble within the hard-right wing: Greene, Biggs, Perry, Gaetz and today’s “rebel” Lauren Boebert from Colorado, for example, still had the so-called “MAGA Squad” in 2021, after Trump’s term in office, when the second impeachment proceedings against him were still ongoing ” founded. Named after Trump’s slogan “Make America Great Again”, they fought together for absolute loyalty to the ex-president – now Greene and the others are hostile to each other in two camps.

Membership in the Freedom Caucus is just one example of how ideological reasons are not necessarily what bring the 20 rebels (17 men and 3 women) together. All but three of them were supported by Trump in the last election — but that’s for two-thirds of the 222 Republican elected representatives. And Trump’s direct request on Wednesday to end her opposition to McCarthy fell on deaf ears – on the contrary: In the last vote, McCarthy even lost one more vote: Victoria Spartz from Indiana only voted “Present”.

She, too, was supported by Trump in November – and is at odds with parts of her party’s right wing: As the only Ukrainian-born US MP, she is campaigning for even more support for Kyiv, while others from the right-wing camp are asking for help would rather hire today than tomorrow. Geographically, the “Never-Kevins” don’t have much in common either: Arizona and Texas are slightly over-represented with three breakaway MPs each, but otherwise their origins are spread across the entire USA – although there is no one from California, McCarthy’s state.

So it stands to reason that it is actually personal ambitions or past conflicts with McCarthy rather than political and strategic differences that have brought this alliance into opposition to the Republican candidate. However, it is now all the more difficult to get out of the trap again. If even five Republicans don’t vote for McCarthy, he won’t have a majority—at least not without help from Democrats.

As far as the 20 have leaned out the window in their rejection of McCarthy, they can hardly swing without massive concessions. These could be committee items, changed rules of procedure that allow the speaker to be voted out more easily and much more. However: There are also 200 other Republican MPs who now feel blackmailed and brought before them.

It currently seems completely impossible that the Republicans should be able to turn their slim majority into effective opposition work against the Biden government under these starting conditions.