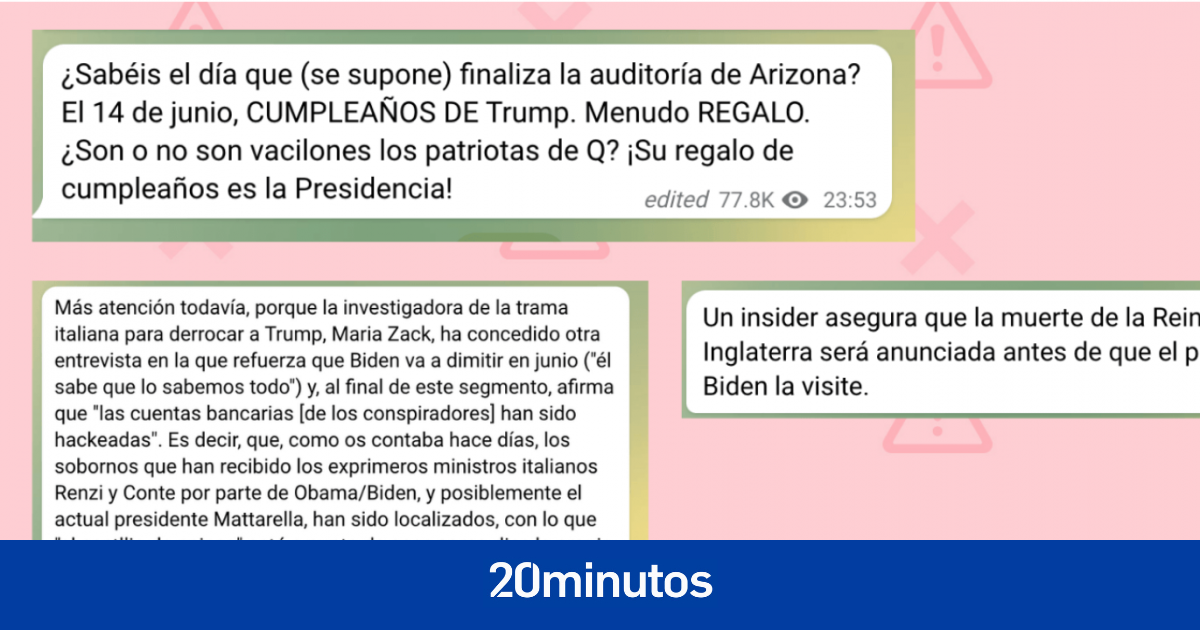 In recent months we have seen how misinformers dedicate themselves to inventing all kinds of predictions that, although they seem implausible, reach hundreds of thousands of people every day. A priori it may seem easy to verify that these anticipated events have not occurred, but the reality is that by the time the appointed date arrives, many of the people who saw the message do not even remember it.

For this reason, in Maldita.es we have compiled those that refer to the month of June that ensured that the Arizona audit would give victory to Donald Trump on his birthday, that Queen Elizabeth II would die before June 13 or that Joe Biden would announce his resignation. These predictions are very similar to those that were announced in the months of March and April and that we already told you about.

No, Queen Elizabeth II has not died in June

This is one of the invented predictions that are repeated and that was already released in April, as we told you on Maldita.es. But neither in April nor in June it has been fulfilled. It’s a hoax.

Juan Q Seven, a Telegram channel in English, published on June 5 that the death of Elizabeth II would be announced before the meeting he had planned with Joe Biden on June 13. This same prediction was shared by Rafapal on its “Rafapal News” channel.

But, as we say, it is a hoax. On June 13, Joe Biden and Queen Elizabeth II met in London and the British monarch neither died before that date nor has she done so throughout the month of June, as we can see from a visit to Scotland that she made on the 29th. .

See Also:  US judiciary is taking action against Trump and his children

Rafapal has almost 130,000 followers on Telegram, while Juan Q Seven has more than 32,000. Although the first channel does not allow the followers to comment, we can see the reactions of many when Juan Q releases predictions that do not come true.

After the meeting of the US president with Elizabeth II, and therefore, after proving that she had not died, we can see how the followers complain when they see that it was again an invented prediction that was not fulfilled.

One of his chat users waited until day 14 to ask him “what happened to this statement?” and he goes on to say “I kept quiet on this case, but I noticed that everyone was posting this claim on other platforms … that’s how you lose credibility.”

“You know the day the Arizona audit (is supposed to) end? June 14, Trump’s BIRTHDAY. What a gift ”. It is the post that Rafapal published on June 7 on his Telegram channel, stating that Trump’s birthday gift was going to be “the presidency.”

As we already told you in April, an audit was launched in Arizona to recount the 2.1 million votes in Maricopa County. However, as CNN explained on June 28, although the audit has been completed, the results and the date on which the report will be published are unknown. Therefore, neither fraud has been proven in the US elections nor has Trump’s victory been announced in June.

Biden has not resigned in June

The made-up predictions didn’t just point to a fraud that would bring about the reinstatement of Donald Trump. They also indicated that it would be Joe Biden himself who was going to resign.

“More attention still” indicated Rafapal, “because the investigator of the Italian plot to overthrow Trump, Maria Zack, has granted another interview in which she reinforces that Biden is going to resign in June …”. But, as we say, it has not been fulfilled either and Biden remains in the presidency.

As absurd or implausible as they may seem to you, remember that these conspiracy theories reach tens of thousands of people who sometimes spread them as if they were real. Therefore, it is important that if you detect any, you send it to us via WhatsApp at +34 644 22 93 19.