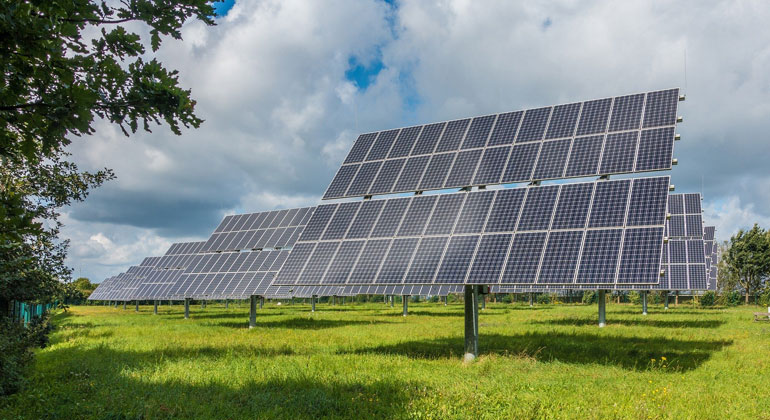 In view of the ongoing climate change and rising energy prices, cheap and sustainable energy sources have taken on a high priority in 2022. Under the keyword “green technology” not only new approaches dealing with solar power or hydrogen were presented. Rather, it stands for a broad trend that has gripped the entire tech industry and deals with a wide variety of topics such as reducing plastic waste or improving e-mobility.

As far as the search for new, environmentally friendly energy sources is concerned, researchers from a wide range of fields have presented a number of exciting approaches. If bacteria, humiditymore human sweat or waste heat – In principle, electricity can be generated in many ways. At the moment this only works in the laboratory, but there are plenty of innovative ideas with promising application potential.

The development in the field of solar power is far more advanced. Technologies are becoming more efficient and can therefore increasingly be used as real alternatives in practice. New research projects show where the journey could lead. Chinese researchers reported a new one world record in the performance of flexible thin-film solar cells. Colleagues from the USA increased their efficiency with the help of a special Films, which also makes ultraviolet and blue light usable, up to 82 percent. And by means infrared light solar energy can even be generated at night.

Another great hope for a “green” energy future is hydrogen. Here, too, scientists have come up with numerous interesting concepts that should enable simpler, cheaper and more efficient production and use of this element. For example, its production rate can be measured using sound waves increase by a factor of 14. But also the use of modified aluminum nanoparticles or Licht can accelerate the production of hydrogen. In order to make them cheaper, some experts rely on specially coated ones electrodesothers on one copper-iron catalyst.

At the very top of the list of priorities are ideas that aim to reduce or perhaps even completely abandon the use of plastics. Indian researchers presented an environmentally friendly alternative transparent wood. This is produced by replacing the lignin, which holds the fibers together like glue, with transparent plastic molecules. In the packaging sector and in other areas, plastic could be replaced by largely natural materials in the future, as researchers at Aalto University emphasize. They have strong and flexible cellulose films that are incredibly stable even when wet.

Microplastics, which pollute people and the environment in various ways, are also set to be dealt with soon. In the course of a joint project by MIT and BASF, a new process was developed with which microplastics can penetrate silk can be replaced, which decomposes in an environmentally neutral way once the work is done. US researchers in Princeton want to use a special seawater Aerogels remove tiny plastic particles on a protein basis. British engineer Adam Root is also on hand „Gulp“ built a device that filters out microplastics from the waste water streams of washing machines.

batteries of the future

The search for new technologies for storing electricity, which will continue to satisfy society’s enormous thirst for energy in the future, is also very popular. Here, too, “green” concepts are becoming increasingly important, as researchers from Maryland have shown. They proved that they are based on Chitin – a substance found in the shells of crustaceans such as crabs, among other things – be able to build an environmentally friendly battery to store electricity from wind and solar generators. Colleagues from Singapore, on the other hand, use waste paper as a raw material for the production of anodes for lithium-ion batteries.

An alternative to lithium-ion batteries may be Calcium-sulphur batteries, the development of which is being promoted in the “CaSino” joint project coordinated by the German Aerospace Center. Calcium is much cheaper than lithium and allows for a more stable materials supply chain, the researchers said. However, advances have also been made with other materials, e.g sodium metal, Lithium Sulfur or Zinc Ion Batterieswhich should do without toxic materials.

New, more efficient power storage devices are not only needed for numerous electronic gadgets, but above all are intended to promote the energy revolution in mobility. To stir up the electromobile world, the Swiss company Morand eTechnology has one „Super-Akku“ developed that can be fully charged in just two and a half minutes. It is enough for about 70 kilometers and is intended for city and hybrid cars that are equipped with electric and combustion engines.

Scientists at the Oak Ridge National Laboratory of the US Department of Energy (DOE) also promise a charging time of just 15 minutes for e-cars. You bet on one Molybdenum tungsten niobate alloy as a powerful replacement for the cathode material commonly used in lithium-ion batteries, graphite. Researchers in Australia want to increase the range with a new one Permanentmagnet-Synchronmotor accomplish. According to the experts, this is more compact and lighter than comparable drives, has a higher efficiency and reaches up to 100,000 revolutions per minute. Engineers from Florida even want the power storage directly in the body hide. This would make e-cars significantly lighter, which could increase their range by 25 percent, according to the basic idea.

The report was from the Editor “pressetext.com” (Markus Steiner) 2022 written – the article may not be redistributed without permission!