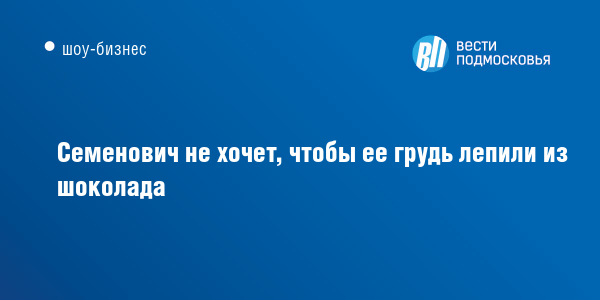 Anna Semenovich decided to insure her breasts. The artist has long planned to do this. Still, Semenovich is associated primarily because of this outstanding part of the body. The star, in an interview with the YouTube channel “Guest”, said that she decided to hurry up with this step because of the scammers.

Semenovich claims that a stranger contacted her. He announced that he was going to become a pastry chef. The man’s plans were to release unusual sweets. He wanted to produce sweets that supposedly correspond to the casts of Semenovich’s chest. The stranger demanded money from the artist, as proof of copyright.

Anna plans to insure her breasts to protect her from such people. By the way, Semenovich is not at all worried about haters. She stated that she was not going to lose weight. The artist stands for body-positive and self-love. The star loves to eat.

No wonder – every January Semenovich is suspected of pregnancy. When an artist gives New Year’s performances, everyone pays attention to her belly. Semenovich calls people to prudence – she simply does not deny herself anything during the festive feasts.