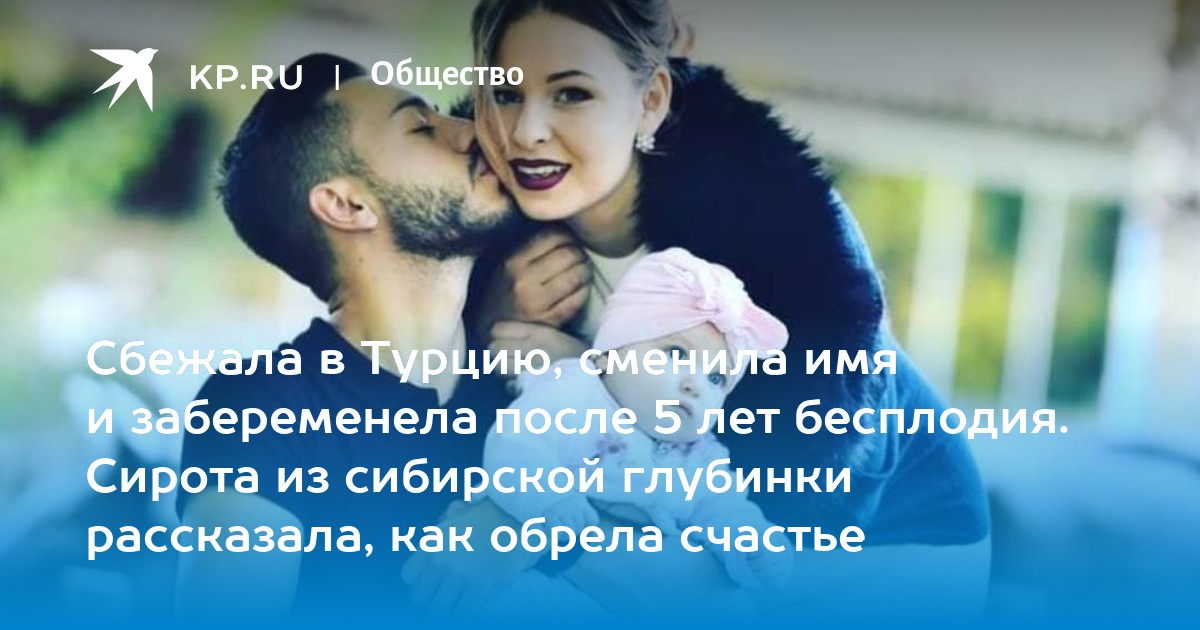 “You won’t be able to have children,” the diagnosis of “infertility” sounded like a verdict for Lyubov Medvedeva from Ulan-Ude. What could be worse for a woman? But the girl continued to believe in a fairy tale in which everything always ends well. And she began to bring it to life herself! So, 6 years ago she was an orphan from the Siberian hinterland, and today she is a Turkish princess. Lives in a house-palace in the city of Manavgat, on the shores of the Mediterranean Sea, with her husband and beautiful daughter.

At 9 years old, left without parents

At the age of 9, Lyubov became an orphan when her mother died. It started suddenly: a woman once felt bad, and then began to melt before her eyes. The relatives were told about the terrible illness only after the death of Lyuba’s mother – she was killed by a brain tumor. However, the grandmother Lyubov Yakovlevna was able to replace the schoolgirl with the love of both mother and father. It was in her honor that a little granddaughter was once named.

At the age of 9, Lyuba stayed with her grandmother, who provided her with a happy childhood. Photo: personal archive of Christina Jam

“As a child, I had everything and even more,” the Turkish princess recalls her childhood. – Even a phone of the latest model. I remember it cost 12 thousand rubles, which is a lot of money for 2006. Grandma will soon turn 85 years old, she went through the Great Patriotic War, independently put three children on her feet and worked as a plasterer-painter for almost 40 years. I consider her to be a great woman. Every day I pray for her health.

The family lived in the village of Zaigraevo, which is located 60 kilometers from Ulan-Ude. The population is no more than 5 thousand people. Like all the village kids, little Lyuba liked to swim in the river, raft on a makeshift raft, and play on the street. But in addition to fun, the girl also had responsibilities – from the age of 8, for example, a schoolgirl already knew how to milk a cow.

But despite all the efforts of her grandmother, the girl still lacked her mother.

– Constantly asked the question “Why do others have a mother, but I do not?” – I still remember how, on September 1, at school, teachers, during their acquaintance, were constantly asked who our parents work. When it was my turn, she gathered all her strength into a fist and answered without trembling in her voice that I had neither mom nor dad …

She worked in a supermarket and dreamed of being an actress

After graduating from school, Lyuba could not find a calling for a long time. The girl received the education of a fashion designer, later took courses in eyelash extension, even worked as a surveillance camera operator in a supermarket and secretly dreamed of leaving everything and leaving somewhere. And once I made up my mind – I bought a one-way ticket to Turkey.

The girl learned to be a designer, took lashmaker courses and worked in a supermarket, but her soul demanded something else. Photo: personal archive of Christina Jam

– I was then 20 years old. In 2015, a friend from Kyrgyzstan invited me to go abroad. At first I worked as a step aerobics coach, then I got a job as an animator in a hotel. She entertained Russian tourists, but then improved her English and Turkish languages ​​and began to communicate with foreigners. She was engaged in acting, yoga, studied psychology. There was enough money not only for myself and renting a two-room apartment, but also to help my grandmother.

For 5 years, Lyubov has become a popular animator and was able to help her grandmother. Photo: personal archive of Christina Jam

Having become a popular animator in five years, the girl decided to change her place of residence. Love planned to work the last season in Turkey and move to Thailand, but life suddenly threw a surprise.

I met my future husband a month before moving

Literally a month before leaving at the hotel where she worked, the Siberian woman noticed a handsome and charming man. Veysel Jam worked as a photographer and, as it turned out later, was born with Love on the same day – September 21, only with a difference of a year. The guys looked at each other for a long time, but one day a young Turk invited a Russian beauty to make a photo session in memory of Turkey, and in return asked for her phone number. So they started communicating in the messenger.

It was from this photograph that the story of Veysel and Lyubov began. Photo: personal archive of Christina Jam

“I have always been incredulous and thought that Veysel, like many Turks, was only playing the role of a loving boyfriend,” the woman admits. – How wrong I was. He turned out to be the most decent and honest man I have met in my life. And after 4 months of relationship, Veysel proposed to me. I warned right away that doctors diagnosed infertility with a 95% probability, but he suggested believing in the remaining 5%. Then the girl said the cherished “yes”.

However, this was only the beginning of changes in the life of Lyubov Medvedeva. The Russian woman decided to change her name, because she thought that “Love” was taking away her strength and as if it did not belong to her at all. Plus, foreigners often simply could not pronounce the combination of Russian “l” and “u”. The choice fell on the Siberian “Christina”. Without knowing why, she believed that this name would bring her good luck.

There is no trace of the diagnosis

Of course, Christina-Lyubov never stopped dreaming about becoming a mother, although she didn’t really believe in a miracle. But one day it happened – a pregnancy test showed the cherished two strips.

After 5 years of a terrible diagnosis, the Siberian woman realized that she would become a mother. Photo: personal archive of Christina Jam

– We got married according to all Turkish customs. First there was matchmaking or nishan, then the official registration of marriage – nikah. After becoming Veysel’s wife, the next day I converted to Islam, after which we performed the mula-nikah ceremony. It’s like a wedding, only for Muslims. There were 800 guests at the celebration. I did not change my faith, I was not baptized in childhood, and I myself did not dare to take this step, as if I felt that I had a different fate.

She feeds her husband with buuz and invites him to Buryatia

The husband’s family accepted Love, or rather Christina, as their own. From the first day of acquaintance, the Russian woman addresses her mother-in-law only “mom”. The girl’s newly-made relatives do not pay attention to the nationality, but the husband, on the contrary, is proud of the origin of his beloved and affectionately calls her in Turkish “my Russian”, and at the same time has learned about a hundred words in his wife’s native language.

“Veysel really fell in love with pancakes, dumplings, semolina porridge, fried potatoes and, of course, Buryat buuz,” the Siberian woman told the KP correspondent. “It was a revelation for their family. They eat with pleasure!

The couple named their baby Vangelia-Sharif. The girl inherited her mother’s bottomless blue eyes, which her father is very proud of. And in Buryatia, the Djam family is already waiting for Lyubov Yakovlevna. She, like no one else, dreams of seeing her great-granddaughter. She cannot come to Turkey to her beloved girls – her health does not allow her to endure long flights.

Don’t dream of marrying a foreigner

Christina, Veysel and Vangelia-Sherif live in the city of Manavgat, 15 minutes from the Mediterranean Sea. And despite the truly fabulous story of a girl from a Siberian hinterland who turned into a Turkish princess, Christina asks Russian girls not to dream of a rich husband or an easy life abroad.

– This is by no means propaganda of moving and marriages with foreigners, – the Siberian woman addresses the readers, – Everyone has their own way! I only dreamed of repaying my grandmother who did so much for me. I hope she reads these lines. Thanks to her for raising me, because it was only when I became a mother that I realized how difficult it is. Veysel and I are planning to live in two countries, and our daughter will be educated in Russia.

A reward from above: a Siberian woman became pregnant after 13 years of attempts, having worked for 4 months as a nurse in the “red zone”. Anastasia Lisovskaya is a kindergarten teacher, but during the pandemic she went to the front line, leaving her family at home. (details)

Throw everything in Zanzibar: A mother and daughter in a pandemic left for Tanzania and found African suitors. Alla and her daughter Yulia have twice visited their lovers in Africa, and now they are waiting for them to visit Siberia. (details)