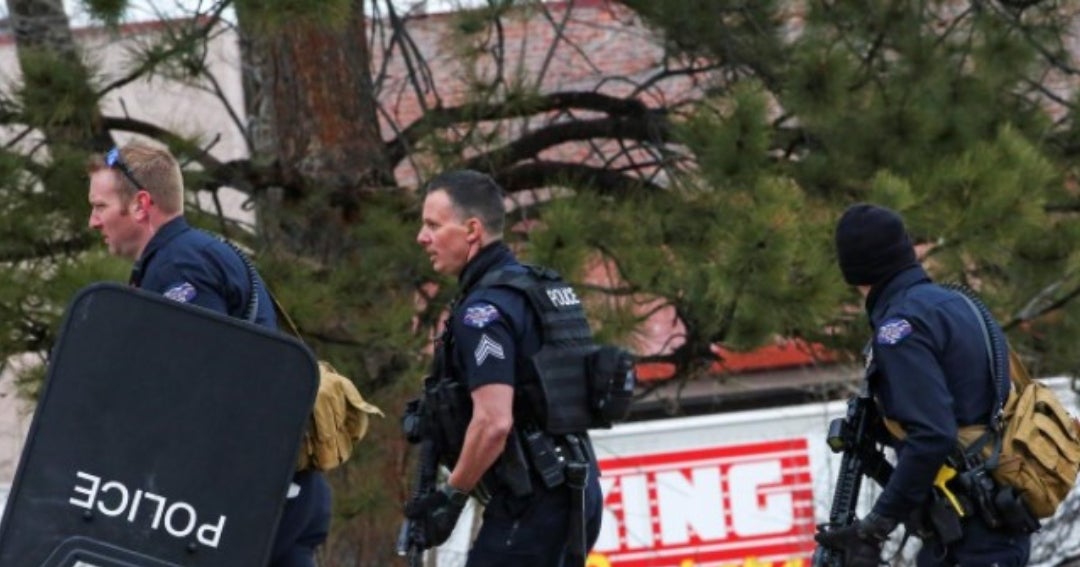 Boulder, Colorado police reported an “active shooter” at a grocery store Monday, and aerial footage broadcast live from the scene by local media showed a person in an ambulance and a bloodied man being escorted and handcuffed.

The police Twitter alert said the incident took place at a King Soopers grocery store in the Table Mesa area of ​​Boulder, a city in the eastern foot of the Rocky Mountains about 28 miles northwest of Denver.

Hours later, Boulder police issued a second tweet saying officers were responding to a report of a “dangerous armed individual” at a nearby location, and that investigators were looking to determine “if this is related to the shooting of King.” Soopers”.

A man who was shopping inside the store with his wife told KCNC-TV in an interview that he heard three loud bangs that sounded like gunshots, and he ran through the store with other customers to escape through a loading dock down the street. rear of the building.

He said the apparent gunshots sounded like they were coming from the checkout area at the front of the store.

Video of the scene broadcast by local television station KDVR-TV showed a shirtless, bearded man in his underpants being led in handcuffs and a person on a stretcher loaded into an ambulance. The detained man appeared to have a bloody leg.

Dean Schiller, who described himself as a journalist and was livestreaming footage of the scene for a YouTube channel identified as ZFG Videography, said in interviews with local media that he heard what sounded like gunshots as he was leaving the grocery store. groceries. Schiller also said he saw three suspected gunshot victims, but he had no information on their conditions.

A short time later, in a parking lot outside the store, Schiller said, he saw police officers surround a sport utility vehicle while ordering its occupants to get out.

Television news footage showed police leading customers and workers out of the store with their hands on their heads. Aerial images also showed a heavy police presence outside the supermarket, along with at least two ambulances.

Table Mesa is home to the hilltop laboratory of the National Center for Atmospheric Research. The supermarket is located about 2 miles from the flagship campus of the University of Colorado.

Colorado Gov. Jared Polis said on Twitter that he was monitoring events unfolding in Boulder, adding: “My prayers are with our fellow Coloradans at this time of sadness and grief as we learn more about the extent of the tragedy”.

The FBI said on Twitter that its agents were assisting local police in the investigation of the supermarket shooting.