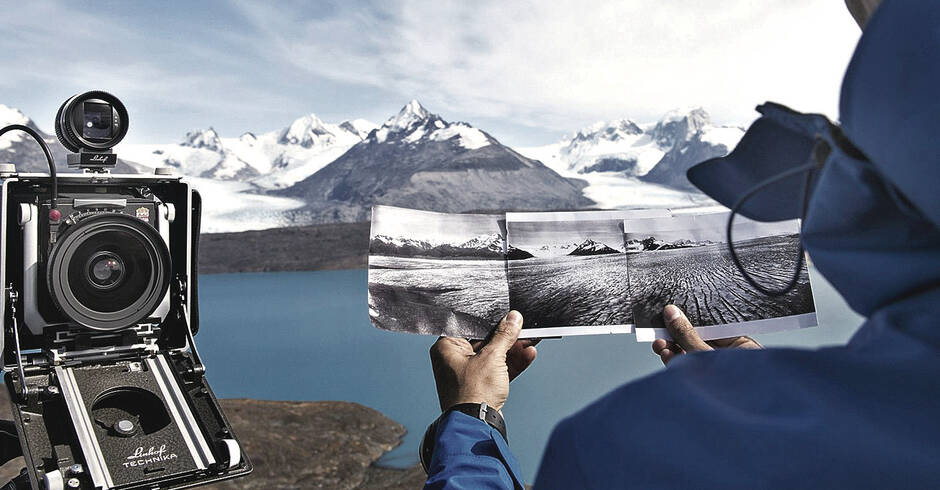 Fabiano Ventura photographs glaciers all over the world. Photo: Santini

Sinsheim. (cbe) The glaciers around the world are melting. The special photo exhibition “On the trail of the glaciers“by the Italian nature photographer Fabiano Ventura, which can currently be seen in the Klima-Arena Sinsheim.

The Marmolada is considered the queen of the Dolomites. But the mountain is changing: “The glacier is losing four meters in thickness and 30 meters in length every year,” reports Ventura. He photographed numerous glaciers and compared them with images that were around 100 years old. The exhibition consists of these before-and-after effects. The 50 large format pictures are often composed of several pictures. On the one hand they show a black and white photo with a large mass of ice, on the other hand a more recent picture in color, on which only little ice can be seen. Instead, the more recent photos show that instead of the glacier, forest is growing, a lake has formed or only scree is left. This change always has a major impact on the environment. Because a large glacier in Alaska has almost completely melted, the sea level has risen by an inch, explains Ventura.

Since 2009 he has been going on expeditions for the recordings. He was in the Caucasus, the Karakoram, the Himalayas, Alaska and the Andes. Most recently he was drawn to the Alps. The photos that were taken there have never been shown. We are a little proud of this world premiere and of the exhibition itself, which is being shown for the first time in Germany, admits Bernd Welz, chairman of the board of the Climate Foundation for Citizens, with a smile. After all, the topic goes very well with the climate arena.

During the expeditions, the teams not only took photos, they also collected research data. The glaciers are “guardians and clear indicators of climate change,” said Ventura. It is therefore important to understand what the right behavior is to preserve nature.