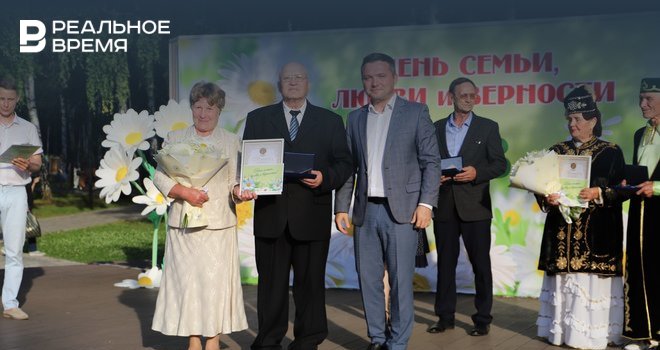 The Day of Family, Love and Fidelity was warmly celebrated in Nizhnekamsk. The festive festival was held in the city park “Semya”. Before the start of the official part, there were workshops on making wreaths and “fevronek” – postcards depicting the symbol of the holiday – daisies.

On the site of the amphitheater, the main event of the festival took place – the awarding of medals “For Love and Loyalty”. This year five exemplary families of Nizhnekamsk received awards. Among them are representatives of Nizhnekamskneftekhim — Vladimir Fedorovich and Lyubov Ivanovna Paranin. The couple lived together for 42 years, raised a son and a daughter, and have four grandchildren.

— The Day of Family, Love and Fidelity has been celebrated at our enterprise since 2008. Nizhnekamskneftekhim is a friendly family. And this holiday is very important for us. The family is really the basis of our life, and of the city, and of the enterprise. When you see such beautiful, but at the same time modest and devoted families, it cannot but rejoice, – Elena Velik, deputy head of the trade union committee of Nizhnekamskneftekhim, said with feeling.

The labor activity of the head of the Paranin family is connected with the service of the Nizhnekamskneftekhim Automation Center. Having worked in a working position and gained professional experience as an instrumentation and automation fitter, he upgraded his qualifications to an electronics engineer. He put forward rationalization proposals, actively participated in the process of creating and implementing automated systems at a synthetic rubber plant.

I am an electronics engineer by profession. My older brother instilled a love for this profession. I love electronics and still do it. This is both a hobby and a comfort for me,” notes Vladimir Paranin.

The wife of Vladimir Paranin – Lyubov Ivanovna was born, grew up in a family of teachers and continued the dynasty. Her work experience is 35 years. She is the author of an economics education program for elementary schools and co-author of an economics textbook for elementary grades. In parallel with the work of a teacher, Lyubov Ivanovna was a public inspector for guardianship and guardianship.

– No need to look for a husband on the side. Vladimir and I grew up in the same village. When I was born, he was 5 years old. We never parted with him, not counting the service in the army. When he returned from the service, they immediately got married. Until today, we live together, – Lyubov Paranina shares her story.

– The secret of our long and happy life together is simple – we must love, respect, appreciate each other, and also give in. The most important thing in life is love, – Vladimir Paranin reveals the secret of their family happiness.

Son Ivan and daughter Anna followed in the footsteps of their father and work at Nizhnekamskneftekhim. The total work experience of the Paranin dynasty is more than 400 years.

– Mom used to say in childhood – do not be afraid, go to the end, you will succeed. Dad is very caring, he always helped and protected us, – recalling her childhood, says Anna Paranina.

See Also:  US Secretary of State will meet Chinese counterparts for the first time next week

The grandchildren of Vladimir and Lyubov Paranin also speak warmly about their grandparents.

Our grandmother is caring and hardworking. Grandpa often repairs various household appliances and appliances. I love them very much,” said Alexey Volodavin.

“You are an example for us, we have something to strive for”

Aizat Makhmutov, Deputy Head of the NMR Executive Committee on Social Issues, came to Semya Park to congratulate exemplary families. He noted that the Day of Family, Love and Fidelity is one of the most touching and bright holidays.

Aizat Makhmutov thanked the couples for the positive example they set for young families.

– You are an example for us, we have something to strive for. There should be more such strong families in our city,” he stressed.

Aizat Makhmutov also awarded medals “For Love and Fidelity” to married couples who have been married for more than 30 years. The decoration of the holiday was the solemn ceremony of naming twins born in the Sabirov family.

The newly-made parents of Ildar and Alina were congratulated by the specialists of the registry office and handed them the first document of the kids – a birth certificate. The first-born were born on June 2. The parents named their daughter Elina, and their son Emir.

On the same day, the parade of the twins “You and I – we are so alike” took place. Approximately 60 residents of Nizhnekamsk submitted applications. The youngest participants are only six months old, while the oldest are 40 years old.

See Also:  Invías has allocated $ 1.8 billion for the intervention of 456 kilometers in Putumayo