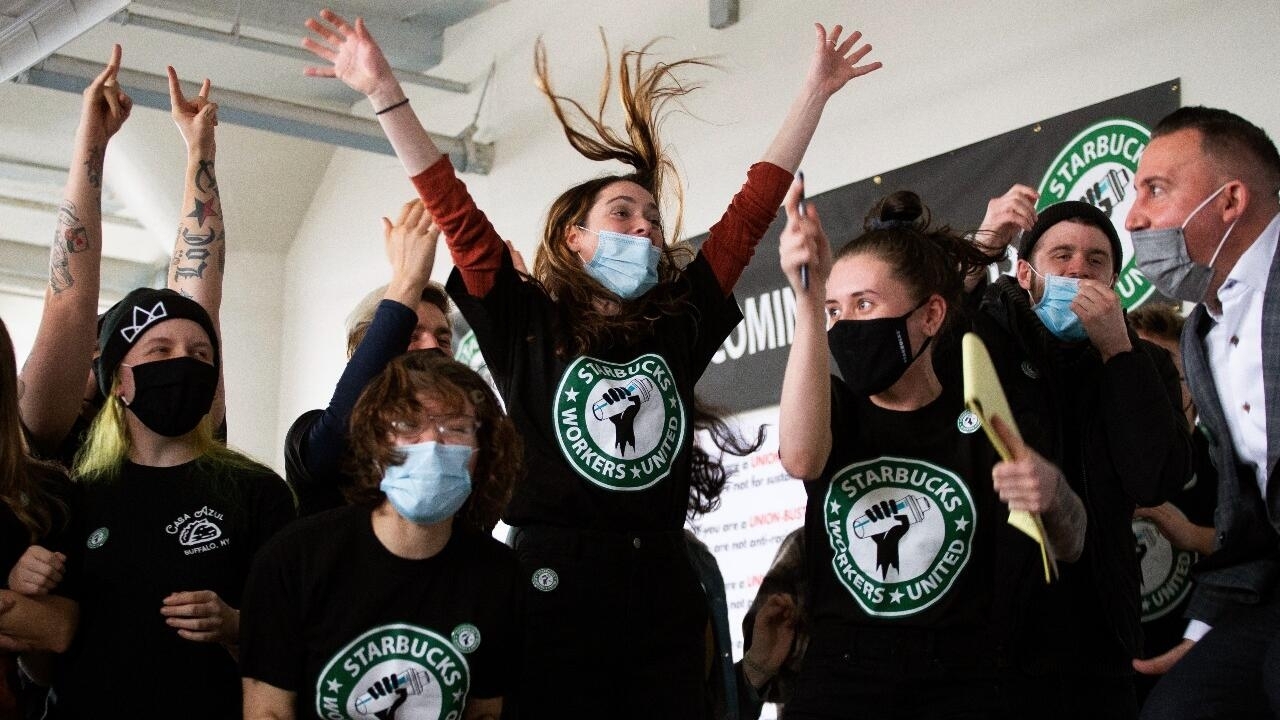 Employees said that “we work in dangerous conditions, while we see how Starbucks gets more and more, the best benefits in years” which pushed people to “be willing to get up and say enough.”

Amid euphoria, shouts and applause, employees of a Starbucks coffee shop in Buffalo, New York, celebrated the creation of the first union in company history.

The announcement was made by the National Labor Relations Board with an overwhelming positive vote in favor of the union at one of the company’s three locations in Buffalo, where around 111 workers had the opportunity to vote by mail since last month, when The possibility of being represented by Workers United, an affiliate of the International Union of Service Employees of the United States, began to be considered.

“Upvotes could accelerate organizing efforts at other Starbucks stores in the United States. Three other stores in Buffalo and a store in Mesa, Arizona, have already petitioned the labor board to hold their own union elections, although these cases they are pending, ”said waitress and union organizer Casey Moore, who has worked at Starbucks for six months.

Union leaders passed the petition to the labor board in August this year, arguing that Starbucks stores have chronic problems such as understaffing, faulty equipment, the general operation of independent stores, and low pay.

Starbucks’ union proposal was inspired by a similar campaign successfully sponsored by employees of local coffee company Spot Coffe in 2017.

“A lot of Starbucks bartenders saw what happened at Spot Coffee and the benefits they made and said, maybe this is something we can do as well,” Moore said.

However, it was the ravages caused by the Covid-19 pandemic that caused the detonation among workers. And since the end of 2020, several commercial sectors of the North American country have begun to deal with the labor unions.

“We have no responsibility at this time. We have neither a say nor a vote. With a union we will be able to sit at the table and say, ‘This is what we want,'” Moore explained to the local media cameras.

Despite the low percentage of union membership in the nation’s private sector, which is only 6.3% and 1.2% among cafeteria and restaurant workers, the success of Starbucks waiters in Buffalo has already spread. in three other cafeterias in the city, apart from the three that were already part of the vote for this union, and another in the state of Arizona.

Starbucks in rejection of the union

The illusion of the young employees was overshadowed by the outright refusal of the company’s corporate body, which considered the project as a “betrayal of principles” that have made the company the giant of cappuccinos and lates on an international level.

The company argued from the outset that its 8,000 owned stores in the United States worked better directly with employees – whom they call “partners” – rather than with a union organization.

The company’s general management initiated a strategy to prevent the initiative from continuing, sending dozens of administrators to Buffalo to “frighten employees and convince them to vote no” to the union’s formation.

In addition, they insisted that with the union group, the “flexibility with each of our partners” is lost, since many of them work in more than one store in the Buffalo area and the administrative staff are more easily communicated directly with each one, to be able to “move them from one store to another.”

See Also:  The dangerous time bomb hidden under Alaska that is close to exploding and could spread deadly viruses

“While we recognize that this creates a certain level of uncertainty, we respect the ongoing process, and regardless of the outcome of this election, we will remain true to our mission and values,” wrote Kevin Johnson, Starbucks president and CEO.

“I had no idea that Starbucks would do the things it ended up doing. I was a little naive, maybe because I believed what they say that Starbucks is a progressive company,” said Moore.

However, the young woman explains that she and her colleagues who accompanied her in the idea can serve as an example for the initiative to be replicated.

“I think people all over the world are going to say, look, they did it, we can do that too. And once we sit down and negotiate a contract with them, everything is going to explode even more.”

Now, the leading employees of the union and Starbucks corporate will have to sit down to negotiate a collective agreement and define a representative among the employees to have exclusive contact with the directors, something that the company has said will “betray the culture of solidarity that characterizes the company. business”.