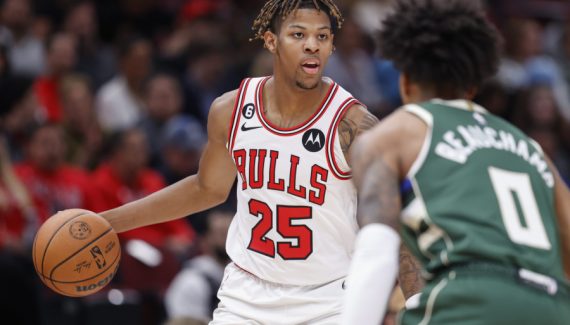 If a Draft is never an exact science since the projection of rookies in the league depends very much on the team and the system they join, there are still very often scenarios that repeat themselves every year. In particular, the players chosen in the first round, particularly in the first half, will probably play more during their first year than those chosen in the second round, even if, each season, certain examples come to shake up this achievement.

This season, it is the case of Dale Terrychosen by the Bulls in 18th position last June. Trained for two seasons in Arizona, the young fullback is the exception that proves the rule, especially when you look at the history of previous Drafts at his position: Tre Mann in 2021 who had played nearly 23 minutes on average during his rookie season , Josh Green in 2020 (just over 11 minutes), and Goga Bitadze in 2019 (9 minutes).

Against 4 short minutes on average in 14 games so far, for the young player of a Chicago team who alternates hot and cold this season, but whose rare certainties come from the outside sector, on positions 2 and 3 , those of Dalen Terry.

« I’m definitely looking forward to getting some game time » he confided thus logically, after his 25th “DNP” of the season on Wednesday, after the Bulls’ narrow defeat in Washington. ” Never in my life have I waxed the bench like this. I wish my name was called all the time […] But in my position, as a rookie, I have to accept this reality for the moment, without being complacent. I can’t fall into a kind of everyday comfort, just listening to advice and never playing. I have to find a balance. »

DeMar DeRozan’s support for taking a step back

So it’s very clear: Dalen Terry doesn’t like his current situation in Illinois very much, but he really has no choice but to accept it, as a rookie in this league. For him, the most disconcerting thing about his gradual transition from the academic world to the professional world is in fact the frequent lack of explanations from the staff, as to his total exclusion from the rotation.

To better manage these moments of doubt and confusion, he can in any case count on the support of DeMar DeRozan, who took him under his wing during this campaign.

« You always want to know why you’re not playing. So I talk about that a lot with the veterans, especially with DeMar. He often talks to me about Kobe [Bryant]of his low playing time during his first three years continues Dalen Terry. ” He sends me videos of Kobe explaining how he used this motivation not to play at the start of his career to become better. He always did what was asked of him at the start of his career, and today we often think of him as one of the greatest of all time. »

Thus, patient but impatient at the same time, Dalen Terry tries to put things into perspective, remembering in particular that he had experienced a similar fate in the NCAA, when his playing time dropped after his “freshman” season. Without that preventing him from being finally chosen in the first round of the last Draft.

« I rely on my veterans, on their advice. They remind me that unless I’m a Top 5 pick player, any rookie is likely to go through what I’m going through he concludes. ” So I keep working and polishing my game, waiting for my time to come. »