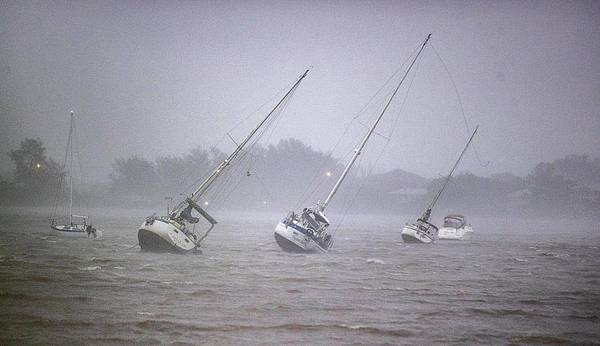 Cape Coral (AP) – The powerful hurricane “Ian” hit the west coast of Florida with violent winds, rain and storm surges. With wind speeds of 240 kilometers per hour, “Ian” was just below the threshold for the highest hurricane category. Experts feared a wide swath of severe damage on the cyclone’s path across the US state.

Some of the storm surges reached a height of around 3.5 meters, said Florida Governor Ron DeSantis. Weather experts feared that they could grow more than five meters high at the top.

According to meteorologists, the hurricane only moved northeast across the country at a speed of around 13 kilometers per hour. That made it even more dangerous given the strong winds and rains. Television pictures showed how rain was whipping through the streets, only the roofs of cars were sticking out of the floodwaters and debris was flying through the air. “Ian” should make the list of the five deadliest hurricanes in Florida, said Gov. DeSantis.

2.5 million people are to evacuate

Residents were urgently warned not to leave their homes on Thursday morning, for example to assess the damage. Even if the hurricane pulls away, there is still a risk of debris, broken power lines and the like. Evacuation instructions applied to around 2.5 million people in the region. However, some of them chose to remain in their homes.

Around 1.6 million households were without power, according to the Poweroutage website. The authorities expected serious damage to infrastructure and communication lines. The extent of the destruction is not likely to become clearer until sunrise on Thursday. Although the hurricane gradually weakened, a strip of land more than a hundred kilometers wide was subject to violent storms along its path. Meteorologists warned that the hurricane could still have destructive hurricane strength when it arrived on the east coast of the state on Thursday.

The center of the cyclone of magnitude four out of five hit the coast on Wednesday afternoon (local time) on the offshore island of Cayo Costa near the city of Cape Coral, as the meteorologists announced. “Ian” had previously gained strength over the Gulf of Mexico.

The first photos and videos on social media showed severe flooding in the cities of Fort Myers Beach, Cape Coral and Naples, some of which were several meters high.

DeSantis said authorities are standing by for salvage and repairs as soon as weather permits. He wrote on Twitter that around 7,000 National Guard soldiers and 179 airplanes or helicopters could be deployed. In addition, more than 40,000 technicians from the utility companies were already on hand to repair power lines. According to the US Hurricane Center, power outages resulting from the “catastrophic damage” of a category hurricane can last four weeks or months, and entire regions could be uninhabitable.

The director of the National Hurricane Center, Ken Graham, emphasized that it will probably take 24 hours after arriving on land for the hurricane to pass over Florida. That means 24 hours of heavy rain.

Deanne Criswell of the US Disaster Management Agency FEMA said the region expected to be affected by the storm had not experienced such a hurricane for around 100 years. Experts are also concerned that in the past few decades the region has been built closer and closer to the water.

UN Secretary-General António Guterres described “Ian” as “another example of dramatic climate activity that we are seeing around the world with increasing frequency and increasing devastation”.

On Tuesday, “Ian” made landfall in Cuba as a category three out of five hurricane. In the state with a good eleven million inhabitants, the power went out at times across the country. Meanwhile, a boat carrying migrants from Cuba sank off the coast of Florida on Wednesday. The US Coast Guard was looking for 23 people, as announced on Twitter. Four migrants had previously reached American Stock Island off Key West by swimming from the boat in stormy weather conditions.