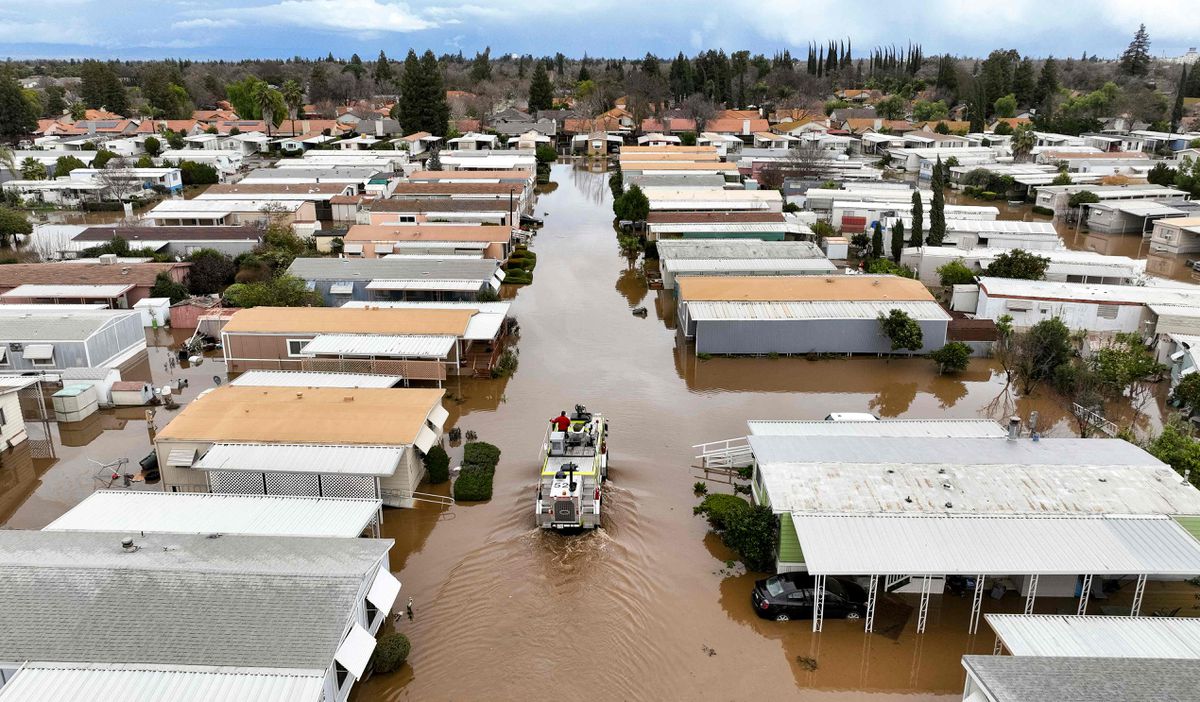 Known for its chronic drought, the last three weeks in California They have offered quite a contrast. A series of storms has brought torrential rains, violent winds and lightning, flooding and mudslides across America’s most populous state. The local authorities maintained this Tuesday morning the evacuation order in dozens of communities that have been affected by the passage of a climatic phenomenon known as an atmospheric river. This has left 16 deaths at the moment in various parts of the entity. More than 160,000 people have also suffered from power cuts.

The most recent victims have been registered very early this Tuesday. A couple of people collided in a car in Tulare, a county halfway between Sacramento and Los Angeles, in the center of the State. The storms have already left more dead that the last two fire seasons in California. “Our message is very simple: be very vigilant,” Governor Gavin Newsom said Monday night from the emergency response center. This Tuesday, the Democratic politician has dedicated the morning to a tour to see the damage caused by the water in Capitola, a city of less than 10,000 inhabitants east of Santa Cruz (north of the State).

This Tuesday all eyes were on Montecito, a coastal community next to Santa Barbara, which has served in recent years as the favorite haunt of the rich and famous. There, new floods were expected for these hours and the authorities had asked the inhabitants of the town to evacuate to higher points. The storm hits the area just five years after a series of mudslides killed 23 people. “It is a solemn reminder of how quickly circumstances can change,” Newsom said in his message.

The situation that Montecito lives in has been transferred to the rest of California by one of its most famous neighbors. Ellen Degeneres, the famous television presenter, shared a video of the fierce torrent left by the rain on Monday with her 130 million followers on Instagram. “Please protect yourselves,” said the driver on the social network. Coastal communities have been some of the hardest hit, receiving up to 15 inches of rain in recent hours in the Los Angeles, Santa Barbara, and Santa Clara regions.

The National Weather Service has rated this storm as the worst in nearly 20 years. “It is the most impressive we have seen since January 5-7, 2005,” indicates a statement from the government agency. The first report this morning forecast the continuation of “heavy rains and winds, possible flooding and the probability of electrical storms”, which could extend from Wednesday to Friday. The agency assures that there is uncertainty, since a new phenomenon could arrive that takes over after the atmospheric river has left the territory.

An atmospheric river is a band of moisture that carries water vapor from the tropics. One of these phenomena caused persistent rains throughout the past week. Its passage has been followed by another just like it, although forecasters believe that the main axis of this second river is to the east of the city of Los Angeles and will be placed over San Luis Obispo County.

The storm combo has put local authorities on guard and forced the federal government headed by Joe Biden to decree a state of emergency. This puts millions of dollars and resources in the hands of the local Administration to help 17 counties that have been affected, according to to a statement from the White House issued this Monday.