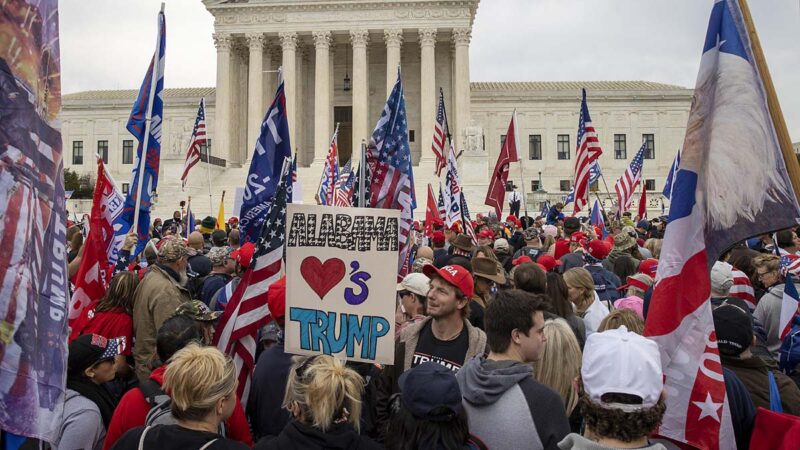 [New Tang Dynasty News, January 02, 2021]A few days ago, 23 state lawmakers headed by Republican Representative Bruce Griffith from Tennessee jointly issued a letter urging Senator Marsha Blackburn (Marsha Blackburn). Blackburn) and other state congress representatives challenged the voting results of the electoral colleges of the six swing states at the joint congressional meeting on January 6 to defend the integrity of the election.

Griffey (Bruce Griffey) posted on Facebook on Thursday (December 31) afternoon that he and Senator and House of Representatives from Tennessee have sent a letter to congressmen in that state asking them to join the federal government. Senator Josh Hawley, Rep. Mo Brooks and Louie Gohmert challenged Republicans to fight for fairness and integrity in the elections against Pennsylvania and Michigan The results of the electoral college voting in the states, Wisconsin, Georgia, Arizona, and Nevada.

“The widespread voting and ballot violations in these states undermined President Trump’s historic and overwhelming victory.” Griffith wrote, “I stood up with other signed elected officials and called for a thorough investigation. Voting is held in both houses of the Senate to decide which electors should be recognized”.

The full text of the letter is attached to the post, and the first recipient is Senator Martha Blackburn of Tennessee, and other congressmen from the state are also included in the recipient list.

“Brooks calls for a thorough investigation of the large number of voter fraud, illegal voting, and election theft reported in the weeks following the November 3 election.” The letter said, “We are writing this letter to give our voice. We strongly support Brooks. Members of Parliament demanded to investigate calls for large-scale election fraud.”

The letter next listed a large number of voter fraud incidents in Arizona, Georgia, Nevada and Wisconsin. include:
• Accept absentee ballots without a postmark or with an expired postmark;
• In Wisconsin and Michigan, polling station workers were seen running ballots on tabulating machines up to 8 or 9 times;
• In each of the 6 disputed states, there are violations of equal protection clauses;
• In Arizona, 75,000 absentee ballots were lost or destroyed, and these ballots were inappropriately included in the table.

The letter said that, sadly, however, law enforcement agencies or administrative officials rarely “investigate these violations in a professional manner”. “Our country’s judicial institutions have shown cowardice and refused to hear many allegations of misconduct.”

The letter continued, “The important thing is that this requirement is not just a challenge to President Trump’s election.” “If the state government can exceed the limits set by our Constitution with impunity, then there is a real limit on government power. What is it?”

The letter finally stated that, for the above reasons, 23 state members of Tennessee jointly issued this letter, requesting that state members of Congress and Congressman Brooks oppose the electoral college voting in disputed states on January 6 to defend the Constitution.

Currently, more than 140 Republicans in the House of Representatives plan to join this challenge. In the Senate, Missouri Senator Josh Hawley has decided to object; Alabama was elected Senator Tommy Tuberville and Kentucky Senator Rand Paul Paul) is also willing to join the challenge.

If the challenge in Congress on January 6 is successful, it may quickly lead to a new election in which the House of Representatives elects the next president with one state, one vote, and the Senate elects the vice president. Since the Republican Party has the dominant state in the House of Representatives, this means that President Trump has a great chance of winning.