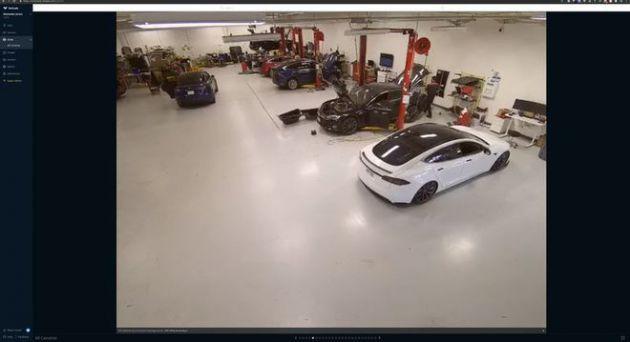 At present, the networking of these cameras has been stopped, and the security control of all links is being further improved.

Under pressure from public opinion, Tesla responded to the incident that 222 cameras in the Shanghai factory were hacked.

On March 10, according to media reports, a group of hackers broke into the database of Silicon Valley security system startup Verkada and stole real-time video content from 150,000 cameras, including Tesla’s Shanghai Gigafactory.

Subsequently, the video of # Tesla上海儿童工作直播# was exposed on the Internet, and the topic immediately rushed into the hot search on Weibo. For a time, the topic of network security and personal privacy once again became the focus of heated discussions among netizens.

“Hacker attacks” are not uncommon, and it is not the first time Tesla has been in contact with them. Prior to this, it has been exposed several times that its self-driving cars have been hacked, and other car super factories have been attacked by networks.

As a result, netizens will inevitably question why big companies have frequent privacy leaks, and when will network security be taken seriously?

In fact, the main target of the hackers this time is not Tesla, nor is it limited to the Shanghai Gigafactory.

The attack entry point for hackers is the AI ​​camera installed in the above scene.

It can be clearly seen in the exposure video that workers in Tesla’s Shanghai warehouse are working on the assembly line; in the Halifax Health Hospital, eight hospital staff have fixed a man on the bed; Alabama Inmates in Madison County Prison in Huntsville, State.

What’s more frightening is that hackers said that they can also capture facial information through AI cameras, as well as more detailed records.

It is understood that most of these AI cameras come from a start-up company called Verkada. The smart camera products developed by the company contain AI vision technology that can identify and analyze objects or faces in the scene. Last year, the company was also censored for infringing on employee privacy by facial recognition technology.

Hackers said that they can also access the video or audio archived by surveillance by hacking into the Verkada work system, the resolution of which can reach 4k.

After the incident was exposed, the incident quickly attracted the attention of domestic and foreign media. After investigation, the Verkada security team issued a statement saying: “We have disabled all internal administrator accounts to prevent any unauthorized access. The scale and scope of the intrusion attack are currently being investigated, and law enforcement agencies have been notified.”

At the same time, Tesla China also issued an investigation statement, which said:

The scope of the hacking incident only involved a Tesla supplier’s production site in Henan, and only a few Verkada camera devices were used in Tesla China. The monitoring equipment of the Shanghai Super Factory is not connected to the Internet, and its video is only stored locally, so it has nothing to do with this incident.

At present, the networking of these cameras has been stopped, and the security control of all links is being further improved.

Tesla seems to be only emphasizing: This matter has nothing to do with the Shanghai factory, so don’t panic.

Many netizens are not satisfied with this statement, and some netizens joked: I only care about tomorrow’s fund

However, it is not difficult for hackers to trigger such a large-scale cyber attack.

According to Bloomberg News, one of the hackers involved in the attack, Tillie Kottmann, said a few days ago that their attack methods are not complicated. They mainly access the Verkada system through a “super administrator” account. Usernames and passwords can be stolen through the Internet.

According to employees, the Verkada system can spy on the cameras of all its customers and download the entire list and balance sheet of thousands of Verkada customers.

Kottmann said that their team was able to gain “root” access on the camera and control the camera to execute its own intrusion code. In some cases, this method can gain wider access to Verkada customers, or hijack the camera as a platform for future hacking attacks.

The important thing is that obtaining this degree of camera access is a built-in feature, and it does not require any additional hacking methods.

From this point of view, the frequent occurrence of hacking incidents still has a lot to do with vendors’ weak awareness of network security. In the past, there have been many hacking incidents caused by this.

Different from traditional cameras, with the gradual maturity of artificial intelligence technology, cameras with only surveillance functions have long been eliminated and replaced by intelligent hardware incorporating AI technology. In addition to video recording, it also has features such as face recognition and voice recognition.

However, it was this intelligent camera that caused widespread panic in 2019.

According to the surveillance video at the time, a girl’s room suddenly heard the sound of music. When the girl returned to the room, a man’s voice appeared in the house. The latter also claimed to be Santa Claus, greeted and had a conversation with the girl. Also tried to instigate the little girl to do some destructive behavior.

It was later discovered that the sound came from the smart security camera Ring in the room. The reason for this incident was that hackers obtained the user’s login information.

Although this incident did not lead to serious consequences, the relevant cases also reflected a problem from the side: AI cameras, intelligent devices, are obviously insufficient in technical offense and defense, and hackers can easily obtain a large amount of user privacy or pose a threat to it.

Write at the end

In the era of Internet of Everything, hacker attacks have become the biggest threat to information security.

However, with the continuous improvement of artificial intelligence technology, hacker attack methods are also evolving, making it more difficult to protect personal privacy data. The emergence of this attack has confirmed this.

Shopping malls, companies, hospitals, schools…Cameras have been everywhere in our lives, collecting a lot of user data every day. More importantly, the camera integrated with AI technology can also capture more personal information through facial recognition. Once these data are stolen by criminals, it may further cause personal safety, property damage, and even threaten national security. Therefore, it is particularly important to strengthen the security protection capabilities of AI cameras and smart terminal products.

It is worth mentioning that there have been multiple hacking incidents in Tesla’s models or factories. For example, the Mode X security protection system was compromised. Hackers can register the keys to drive the car in 3 minutes; Tesla’s Nevada factory was hacked , Was extorted by hackers with $1 million and so on.

Although the target of this hacker attack is not Tesla, behind the above incidents, it can be seen that its network security protection is obviously insufficient.

In its response, Tesla China stated that it would strengthen safety management and control, then,

Do you think this will be the last Tesla hacking incident?