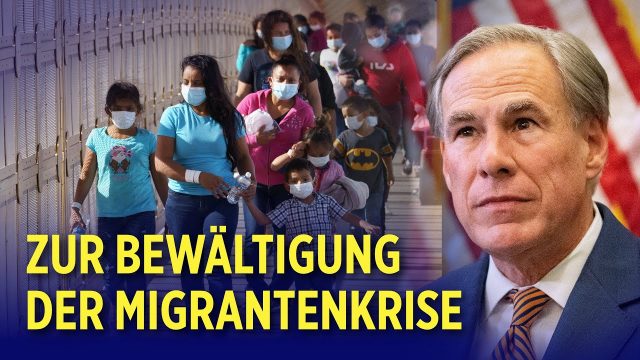 The following post is the original text for the video: “USA: Texas wants to build its own border wall” from the YouTube channel NTD-Deutsch. Epoch Times made no editorial changes.

President Biden has stopped Trump’s wall building. But the migrant crisis is now allowing Texas to create facts on its own. The state is now building its own border wall.

“I will announce the plan for the state of Texas to start building the border wall in Texas next week.” – said Greg Abbott.

Texas Governor Greg Abbott announced a series of measures to address the border crisis last Thursday. Among other things, a task force is to be set up, consisting of government members at the state level.

The original video from NTD German:

Among other things, the task force is to take care of the concerns of the Texan landowners who have suffered damage due to the illegal border crossings.

And Texas shouldn’t stand alone. Abbott calls on other states to help. Because the migrant crisis concerns all states.

Arizona Governor Ducey and I rely on an interstate agreement that gives states the power to help one another in times of disaster and emergency. We call on other states to send reinforcements. ”

Funding totaling $ 1 billion has also been approved to cope with the crisis. In addition, Texas law enforcement will arrest anyone who illegally enters the state. Abbott says his state will not stand idly by as the crisis escalates.

The crisis on the US border. Not only the Texans but also Guatemala’s President Alejandro Giammattei blames US President Joe Biden for this.

The crisis is making itself felt in a gap in the border wall in Arizona. It has now become a magnet for illegal migrants.

In an interview with “Fox News”, Guatemala’s President pointed out the side effects of Biden’s migration policy, in particular the way it deals with unaccompanied minors.

“Because they said over there that they were promoting family reunification, the coyotes came and dragged the children and youth to the United States.” – said Alejandro Giammattei, President of Guatemala

At the same time, a gap along the border wall in the Arizona desert has become a magnet for illegal border crossers.

People from many countries such as Honduras, Brazil, Haiti and Cuba cross the border in the Yuma sector of Arizona.