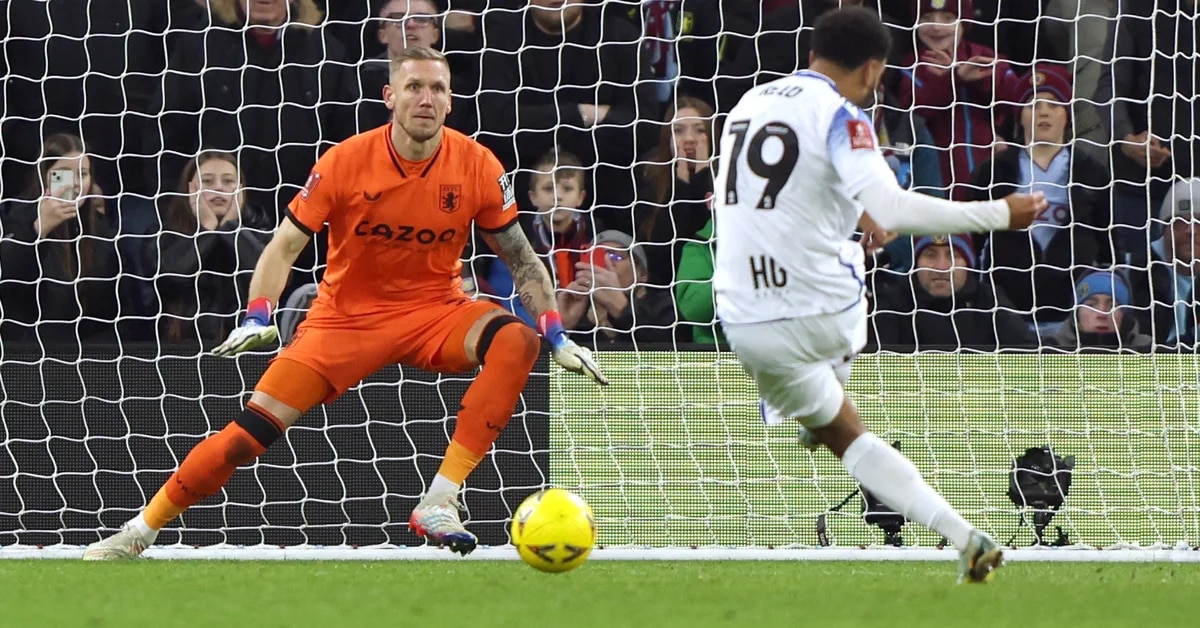 * The summary of Aston Villa 1 – 2 Stevenage

The best of Dibu Martínez’s return to Aston Villa: tribute with flag included and two key saves in the draw against Wolverhampton

the figure of Emiliano Martinez became gigantic after having been one of the fundamental pillars for Argentina to stay with the World Cup Qatar 2022. Since his return to Aston Villacoach Unai Emery used in just one game out of three played to the winner of the Golden Glove awarded by FIFA and this Sunday the Swedish Robin Olsen reappeared as a starter in the match corresponding to the third round of the FA Cup in front of Stevenage England’s fourth division.

Far from living a quiet commitment as the papers indicated in the previous one, the villains they lowered their guard in the final minutes and suffered one of the toughest defeats in their history. the picture of the Premier League cheered up his fans early with the goal of Morgan Sanson 33 minutes into the first half and everything suggested that at that moment those led by the Spanish coach began to close the classification.

With six minutes to go until the end of the match, Leander Dendoncker he lost the ball on a start from the bottom and ended up committing a last-man penalty which cost him a penalty in addition to sending off. The Villa Park missed more than ever the ability of the Back to stop firing from twelve steps: Jamie Reid finished off crossed and Olsen flew to the other stick in what was a 1-1 equality for the small club of promotion.

Stevenage was already touching glory by forcing a replay on his court, but what his fans did not know is that in a handful of seconds would become Aston Villa’s nightmare. The visit played a penalty corner on minute 90 due to the distraction of the defenders and the midfielder Dean Campbell he found himself inside the large area ready to shoot on goal. A low shot to the near post He got a weak response from the Swedish goalkeeper and the Fourth Division team made it 2-1.

The moment the game changed: Reed finished off across and Olsen flew to the other post (Photo: Reuters)

Beyond the five minutes of addition granted by referee Graham Scott, the villains They couldn’t do anything with one less footballer and totally emotionally beaten. Those led by Emery they were knocked out in the third round of the FA Cup for the seventh consecutive season: The last time they advanced beyond that instance in this tournament was in the 2015/2016 season.

The sequence of the psychological game that Julián Álvarez overcame: the penalty goal against Chelsea that became a record

The Argentine striker converted from twelve steps for Manchester City. The Spanish Kepa tried to appeal Dibu Martínez’s appeal, but did not achieve the desired result. The images

“I am very surprised. But it can happen when you have good chances to score and you don’t take advantage of them. They also had chances. Our mistake was serious and they scored. After that, in the last five minutes, we were a bit upset and we didn’t control our minds. It is a process. In other games we have not been fine. We have to improve, we have to learn, we have to try to find a solution”, explained the Spanish coach before the microphones.

aston villa He has already run out of chances in both the FA Cup and the Carabao Cup, in addition to not having any international competition ahead. The calendar until the middle of the year is exclusively for the Premier League and this Friday, December 13, it will receive the Leeds United in it Villa Park. Probably Emiliano Martinez regain ownership since the Birmingham team cannot relax at being seven points from the relegation zone and six from the Conference League and Europa League zone.

The sequence of the psychological game that Julián Álvarez overcame: the penalty goal against Chelsea that became a record
After Messi’s “go there, fool”, Wout Weghorst could be a teammate of a world champion with Argentina
The “Cristiano Ronaldo” rule: how is the new clause applied by Manchester United after the conflict with the Portuguese