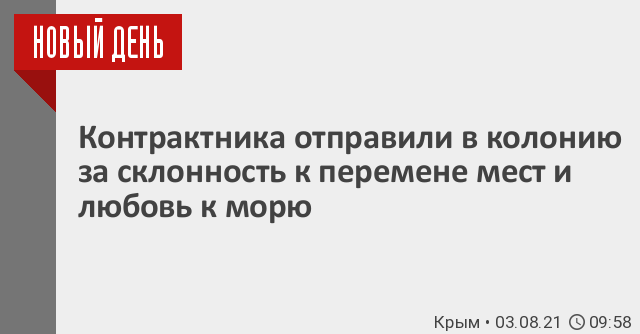 In Sevastopol, a sentence was passed on a corporal who escaped from service to the Crimea.

As RIA “New Day” was told in the military investigation department of the Russian IC for the Black Sea Fleet, the man served under a contract in military unit 20924 in the Moscow region.

On June 29, 2020, he did not appear at his place of service and did not make himself felt for almost 8 months, and on February 21 of this year he appeared at the military commandant’s office of Sevastopol.

As it turned out, after escaping from the service, the corporal first went to Chita, then returned to the Moscow region in – Podolsk, then left for Simeiz and after a while moved to Sevastopol.

The Sevastopol garrison military court found him guilty of unauthorized abandonment of a unit or place of service for a period of more than 1 month (part 4 of Article 337 of the Criminal Code of the Russian Federation) and sentenced him to 1.5 years in prison in a colony-settlement.

In Sevastopol, they are looking for a woman who beat a disabled child. / The majority went into the “shadow”: in the Crimea they reported on the next tourist records. / A criminal case was opened against the Crimean millionaire (VIDEO).
Read more