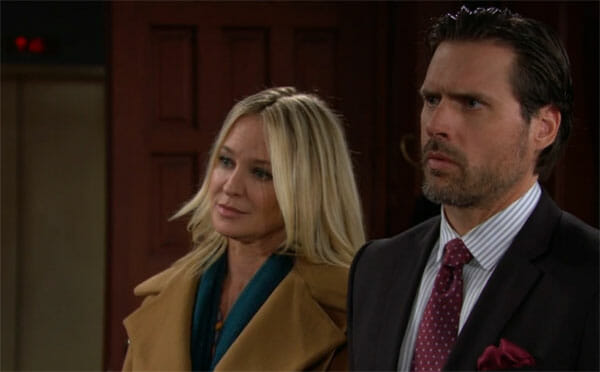 What awaits us in the daily series Les feus de l’amour on TF1 the week of January 16 to 20, 2023? Spoilers revealed with all the complete and unpublished summaries of the week.

Le feuilleton The fires of love on TF1 The week of January 9 to 13, 2023 still has a lot of twists in store for us, with a total of 5 new episodes.
Nikki asks Sharon to help Victoria who is not well psychologically. Nate and Devon care about Jared, they want to help him given his situation…but Jared isn’t very open. Jill receives support from Traci and Jack to reunite William and Lily for the Medias branch of Chancellor Industries. Phyllis ready for anything does not hesitate to threaten Chance…about the theft of the recording.

Adam introduces Chelsea to a former friend Alyssa on the Kansas farm: they remember Cliff, the man who raised Adam…but he was run over by a driver.

Mariah does everything to reconcile with Tessa even Tanner tries to help in his own way. Jack makes a point with Theo, he wants this competition with his cousin Kyle to end. Chance keeps moving forward to spot Colin and attempt to stop him. Nate discovers that he and Amanda had the same childhood: they lived in foster care. Chloe resigns from Greater Phoenix. Jack makes a big decision, he’s decided to welcome Dina home…as a result he’s going to spend less time at Jabott’s.

-> The fires of love on Monday, January 16, 2023 (full summary) with Sharon coming to help Victoria.

The fires of love from Tuesday January 17, 2023, the summary with William and Amanda’s kiss with Rey who tries to reason with Faith.

Sharon offers her help to Victoria, she comes with a cake. Victoria feels she doesn’t need a shrink, she just wants to rest.

Rey takes it upon herself to lecture Faith because she skipped class and responded to her teacher.

Mariah confides with an open heart

Mariah does everything to get Tessa to forgive her for her infidelity but she doesn’t want to know. Mariah explains to Tessa that she thought she was dating Tanner and had abandoned her. Mariah says she hasn’t had contact with Lindsay since the other day. Mariah decides to confess everything to Tessa about the loss of her job since Devon shut down Power communications and the fact that her mother has breast cancer.

Sharon can count on Rey at all times

Chelsea, Connor and Adam are at the farm in Kansas and meet Alyssa. She is a childhood friend of Adam. Alyssa’s father died in an accident when they were children. Adam has a memory that comes back to him about Victor: he had come to see them (him and his mother) shortly before the accident of AJ, Alyssa’s father. Adam wonders if Victor is responsible.

The fires of love of Wednesday January 18, 2023, the summary with Jack who wants Theo to stop his provocations with Kyle

William and Lily have lots of ideas for their project

Mariah is inconsolable about her breakup with Tessa, Sharon tries to find the right words. Mariah admits that she was offered a job in Chicago but she does not see herself leaving with cancer etc…

Lola is ready to help Abby with the opening of the restaurant for the new hotel by remaining the model of the Society. Tanner encourages Tessa to forgive Mariah because she loves her so much.
Chance makes a revelation to Jill, Colin used Devon’s money to launder it…through the bank accounts of Chancellor Industries. Jill faces a lawsuit, Chance advises her to talk to her lawyers…even if she didn’t know, the police might press charges. Chance wants to stop Colin at all costs.

William and Lily try to move forward with their project for the media branch. Tanner admits to Tessa that Mariah wasn’t completely wrong, he imagined at one point a future for both of them…but when he saw Mariah with her, he understood how strong their love was.

Theo has not said his last word with Lola

The fires of love of Thursday January 19, 2023, the summary with Summer which brings together Phyllis and Nick because she knows everything

Mariah makes her statement on stage at Tessa’s concert

Victoria returns to work at Newman Enterprises but very quickly realizes that she is still weak. She still needs her recovery and help from Sharon and her parents. Jack is going to take care of Dina who is bad…he asks Kyle to manage the affairs at Jabot in his absence. Jill decides to buy the premises of Etalon Noir from Nick so that William and Lily can work there for Chancellor Communications.

Nate discovers Amanda’s difficult past, she is also an adopted child. Tanner asked Mariah to join Tessa on stage for a song and to ask her forgiveness. Mariah confesses that she will do anything to get them back together. Summer is convinced that Nick and Phyllis are back together…and that’s not good news. Chloe has resigned from Greater Phoenix.

The fires of love of Friday, January 20, 202, the summary with Dina the return: Traci, Jack and Ashley have come to an agreement.

Adam wants his childhood friend Alyssa to investigate Cliff’s death and Victor’s possible involvement in AJ’s death. Alyssa refuses to believe this theory. Chelsea then sets a trap for Alyssa saying that Victor is probably involved…as if she had slipped up. The goal for Adam and Chelsea is for Alyssa to seek information. Devon is proud of his sister Lily, he thinks she made the right career choice. Neil would be proud.

Phyllis wants to see Nick, she writes the text with the help of Amanda even if she does not know who the recipient is. Chelsea and Nick clash… Nick warns her, she should be wary of him and stop supporting him in all circumstances. Bad news, Nate tells Amanda that Jared is in prison.

The videos extracted from The Fires of Love (TF1) of the week with the episodes from January 16 to 20, 2023

Watch some VO extracts from the week of the Young and the Restless broadcast on TF1 from January 16 to 20, 2023 (and in March 2020 on CBS) with Mariah who wants to be forgiven and William / Lily the new professional duo:

Mariah fights for her relationship this week on #YR! pic.twitter.com/fw8KIyb1LJ