The façade of the school./PF

Anyone who wants to enjoy a unique historical-artistic route, in a wonderful place for its beauty and ethnography, and discover, in addition to granaries, bread baskets, and emblazoned palaces worthy of more than mention, one of the most unique buildings and perhaps more unknown to most of the people in this region, you cannot stop reading these lines and go to the beautiful town of Sama de Grado to visit its old school, where we can enjoy thanks to the Indian footprint, of the most beautiful exponent of the great work Cervantina in Asturias: Don Quixote reflected and narrated, scene by scene, in each of its tiles. For me it was a unique experience that made me investigate as much as possible about it and today I want to capture a bit of it because it is worth sharing.

I would like to begin by saying that the financing and construction of the headquarters building of the Sama de Grado national school (which would house two units, one for each sex), with the intention of being donated to the municipality, was assumed by the Indian Adolfo Prieto Álvarez, born in Sama and resident in Mexico. The construction project was entrusted in Madrid to the architect José Fonseca and dated April 16, 1930 and in 1932 the works were already completed, although it did not begin to function as a school until 1938. This work is noteworthy as one of the largest exponents of the contribution that, between 1870 and 1936, the Indianos and emigrants made to schooling and social progress in rural Asturias. According to data from Benito Castrillo Sagredo, primary education inspector, we had 350 primary schools of emigrant origin. Almost nothing!.

The architectural design of the Sama de Grado school, called the Maria Josefa School Group, the name with which the donor honored the memory of his daughter, constitutes a building of special singularity and unquestionable aesthetic quality. It is surprising to find in the plinth of an Asturian rural school a sample of tiles from Triana (Seville) of such interest and plastic quality. This building exhibits the most beautiful collection of 122 tiles, made “on the dry rope”, with motifs related to Don Quixote. In them we can observe well-known scenes such as the fight of the windmills, Sancho’s mantle, the death of the ingenious hidalgo, or other less popular ones related to the sale and his adventures along the roads of La Mancha.

It is easy to imagine the schoolchildren of the 1920s gaping at the contemplation of the brilliance and colors of the scenes from Don Quixote, just as I have remained this year, placed at the level of their innocent eyes. Knight and squire break into the fantasy of the boys and girls of a sober village, avid for stories and children’s adventures, capable of fascinating their imagination.

This magic is possible due to the singular effort of an Indian to bring you closer, in its most plastic and seductive version, the most emblematic figure of our literature. And this, with a clear desire for permanence, displaying it on the walls, enduring, not ephemeral paper.

If we get closer and pay close attention to the surface of the tiles, we will notice that they are drawn and colored following a singular technique that allows the colors to remain isolated from each other, giving a sensation of relief. This is the result that is obtained by applying the aforementioned technique of the “cuerda seca”. This is a procedure developed by the Arabs intended to achieve the use of various metal oxides in the same ceramic piece without mixing them and which, in turn, made it possible to define the geometric patterns that were traditionally used on ceramic plates. To do this, a taut little string was placed over the previously traced drawing, which, impregnated with grease, marked the different sections that would be colored with the corresponding enamel. When the pieces were fired, this string disappeared, leaving deep uncolored grooves that formed the pattern of the drawing. Since the 16th century, Seville had a long tradition in the production of tile panels decorated by very different techniques, and in the 19th century, a series of factories, among which the La Cartuja earthenware factory, the Montalbán factory, the from Laffite, from Santa Ana, and from Mensaque give new impetus to the world of ceramics and tiles, and that is why Seville was chosen for the production of those from Sama de Grado.

Sama’s tiles may be from the Mesaque or Ramos Rejano workshop, since both worked the “cuerda seca” and what is clear is that it is a production that was born by the best tile masters of Triana.

The tiles referring to Don Quixote are intermingled before our eyes with those that narrate Spanish sayings, sentences and proverbs, in which the first word always begins with the capital letter framed in a specially decorated box and, then, the rest of the proverb or saying with capital letters and in several lines. Its particular feature is the filigree decoration typical of the tableware of the time and place with the same greens, blues and yellows. They are not sayings collected from Don Quixote but they all have a marked didactic character, ideal for a school, where popular wisdom prints a background of prudence and caution in the face of the unknown.

I really tell you that going to Sama de Grado, accessing the beautiful surroundings of the school, surrounded by perfectly manicured lawns, getting to know the building, the statue that represents the aforementioned Indian, and dedicating a good time to visualizing this majestic work of art that these tiles of Don Quixote represent is something that is well worth it. I recommend it to everyone, and I end with some lyrics from Cervantes’ work, how could it be otherwise: “In a place in La Mancha, whose name I don’t want to remember, not long ago lived a hidalgo from those of lance in shipyard, old shield, skinny nag and running greyhound…”. And in 2022 one can still meet him: go to Sama de Grado to see him! 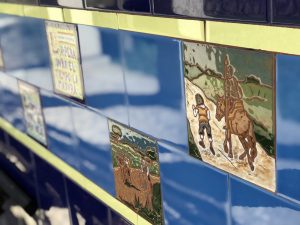 Some of the tiles/ Patricia F. Bermejo