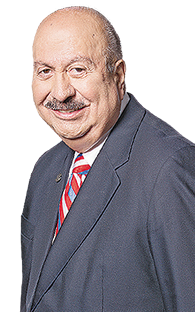 Simón Bolívar, James Monroe and José María Morelos imagined that America was one, that it was unique and that it was united. They were not deluded, but just naive. The deluded are those who, 200 years later, continue to believe in that American legend.

We were the first nation to wake up from that dream. It was rough, it was bitter, and it was in 1847. The neighbors had never done it to any of them and they never did it to another. All its territory has always been purchased for good. For the patriotism of independence, as were the 13 colonies. For the feat of colonization, as was its central region. Or for the money of the purchase, as Alaska and Louisiana were.

Ours was the exception. But that was already in the past, it is not in the present nor will it be in the future. We neither expect returns nor do we want apologies. Since then we have been partners in treaties and allies in wars. So it must be. Vicki Baum already said it, “if you have highness, forgive, and if you don’t have it, at least forget.” So it has been.

But if we look to the south, not everyone is pleasing to us and not everyone likes us. I take the innocuous example of football predilection. If Spain and Argentina played the world final, nine out of ten Mexicans would be in favor of Spain. And if the game were between Mexico and Italy, the majority of South Americans would be with Italy and against Mexico.

Mexico has been a lone wolf in the Latin American concert. It is pure fable that he has been the leader and the older brother. Mexico was the only one that did not vote to exclude Cuba from the OAS. But that did not make us enemies of the United States. Mexico was the only Latin American ally of the United States, while many flirted with the Führer. But that didn’t make us enemies of the South.

For this reason, everyone knows that there is no America, only the Americas. No other continent recognizes its plurality. There are no Europe, Asia or Africa. Only the Americas, whether you talk about plazas, cinemas, restaurants, racetracks or presidential summits.

However, in many frayed speeches the singsong of Pan-American unity is repeated. But history tells us that Europe is united and that America is disunited. Pan-Europeanism is already a reality, while Pan-Americanism remains a fantasy.

Europeans have been determined by a fight against dictatorships, persecution, discrimination, extermination and injustice. Therefore, for them, the protection of the individual is a pre-eminent value to the defense of sovereignties.

Instead, Americans have been more determined by the abuses of some nations against others. Particularly of the most powerful against the weakest. That is why, for a Latin American, history and politics have placed him in the condition of seeking the defense of sovereignty above all else.

See Also:  A California city in the US could run out of water before the end of the year

The logical equation of the sovereignty of the American peoples forces us to respect that each one adopts the political regime that best suits him and that each one chooses the friends that most appeal to him.

The Pan-American summits only serve for the speech, for the photography and to tell in their country what each one wants. No one is essential, except the United States. The one who doesn’t attend, they don’t miss him and they don’t even notice him. Everyone hugs each other and everyone promises to come back for the next one.