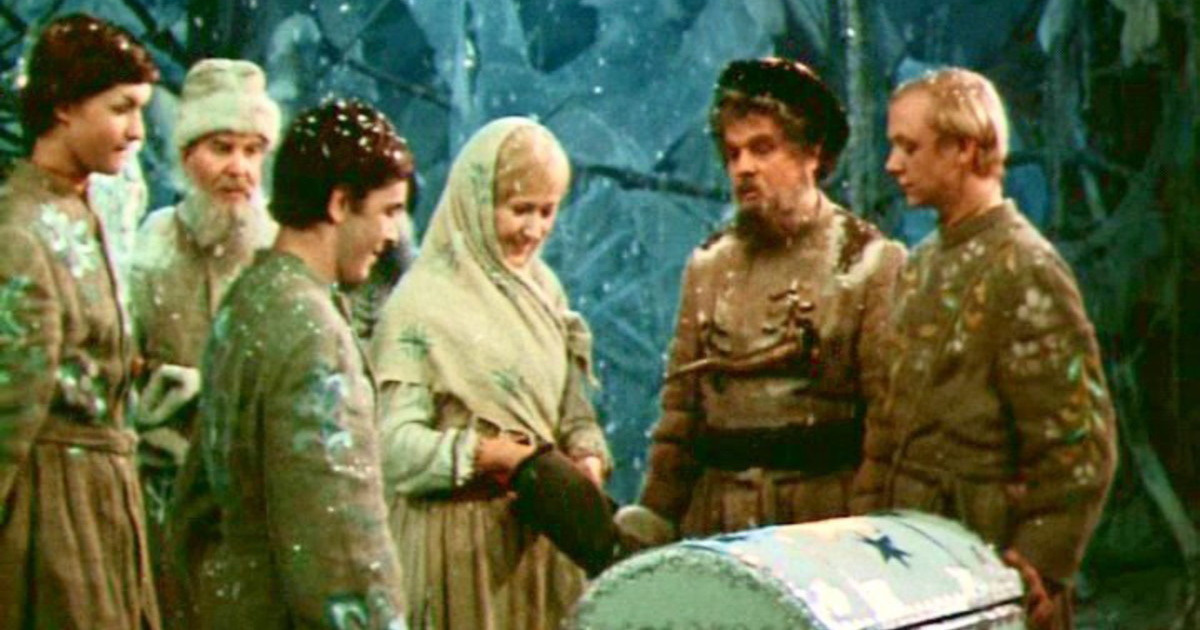 On January 1, 1973, the audience saw the result of the works of the poet Samuil Marshak and the director Anatoly Granik. The tale “12 months” about how the wayward Queen ordered snowdrops on New Year’s Eve, and the evil Stepmother, who wanted to receive an award for fulfilling the monarch’s whim, sent the meek Stepdaughter to the forest for flowers, and today it is relevant during the New Year holidays. Of course, the picture would not have found success without the participation of outstanding artists.

For some of them, “12 months” became a debut on the screen, a ticket to the world of cinema. Another question is whether the novice actors were able to take advantage of the chance and gain a foothold in the profession. For Olga Viklandt, who played the Stepmother, and Nikolai Volkov Sr., who was reincarnated as the Professor, the film, on the contrary, was far from the first, albeit a very significant work.

Who found love on the playground, who later disappeared from the radar, and who was closer to the stage? On the birthday of the tale, we recall the fate of the leading actors.

When preparations for the adaptation of the play by Samuil Marshak began in 1972, the assistant director called Liana and invited her to audition. The girl’s heart was beating furiously on the way to Lenfilm: not only had she just graduated from the university and hadn’t been filmed anywhere, she was also her favorite fairy tale! At the studio, a stranger asked the actress to read the script to him aloud before the director arrived. An eternity passed, when suddenly a man stopped the artist and said that she would play the Queen. It turned out that Anatoly Granik himself was in front of the graduate. “Then he added:“ Grow your hair longer. The Queen will have pigtails, ”Zhvania recalled.

Long rehearsals began, discussion of the relationship between the heroine and the characters, the search for the circumstances by which the Queen turned into a capricious girl. Excuses were found quickly: the monarch is an orphan, surrounded by deceitful courtiers, the only person close to her is the Professor, and the girl is already tired of his moralizing. Probably, the plot seems harmless to modern viewers, but for the Soviet censors in this story there were many unwanted political hints. The film could gather dust on the shelf, if the film’s consultant, the son of Marshak Immanuel, had not stood up for it. The officials could not refuse the respected physicist.

For the fate of the tape, the consultant fought not only because of the play and the script of his father: Immanuel fell in love with Liana and was ready for anything to make her shine on the screen. Zhvania emphasized that the feelings of the 55-year-old physicist were of a platonic nature, and things did not go beyond beautiful letters. Unfortunately, Marshak Jr. passed away less than five years after the premiere of “12 Months”, but the actress still keeps his touching messages.

Why, despite the efforts of the eminent fan, Zhvania subsequently so rarely acted in films? The answer is simple – the priority for the actress was serving the Leningrad Youth Theater, because only in the theater did she feel the spontaneity and liveliness of the audience’s response.

In truth, the artist was torn all her life between vocation and love. The proposal to Liana was made by theater critic Viktor Borovsky and TV presenter Yuri Senkevich, but both insisted on leaving the theater, and the woman could not agree to such a sacrifice. As a result, Zhvania married a fan, a medical student named Alexey. Subsequently, one of the reasons for the couple’s divorce was that the husband persistently suggested that the chosen one go to the Film Actor’s Studio at Lenfilm, where, in his opinion, she would earn more, which was very important in the stagnant 80s.

“But for me, leaving my favorite theater was unthinkable,” the actress explained. – We broke up. Having become an oncologist, Alexey built a career first in Poland and then in Germany, where he created another family. But the fruit of our union was the desired and beloved daughter Nastya, with whom he continues to communicate. Having a spectacular appearance, she did not follow in my footsteps, but began to study foreign languages. She graduated from the philological faculty of St. Petersburg State University and has been working as a guide-translator for over 15 years. The fairy tale film became her favorite. “

The theater star played her brightest film roles in children’s films: Baba Babarikha in The Tale of Tsar Saltan, Atamansha from The Snow Queen and, of course, the evil stepmother in 12 Months. After participating in the adaptation of Marshak’s play, the actress starred for another 10 years. We can conclude that she ended her career because of her old age – after 70 – but the true reasons should be sought in the love story of Viklandt.

do not missDeath of children, widowhood, religious fanaticism: the untold fates of the stars of the “Snow Queen”

The actress met her first husband at the Mossovet Theater. Director Vasily Vanin was known as a heartthrob and was not particularly loyal. When the artist Mikhail Nazvanov appeared within the walls of the theater and Viklandt soon confessed his love, the woman, tired of fighting for marriage, went over to her admirer. But Olga Arturovna did not finally break off relations with Vanin: after the war, she and her second husband had nowhere to live, and Vasily Vasilyevich kindly agreed to shelter the couple in his Moscow apartment.

Unusual cohabitation continued until Vanin’s death in the early 50s. Shortly before the tragedy, Wiklandt followed him to the Pushkin Theater and eventually remained there for as much as 40 years. A new blow awaited the artist in 1964: the second husband died. After Nazvanov’s death, the actress closed in on herself and almost stopped communicating with friends and colleagues.

The theater was the only outlet for Olga Arturovna, but even here she was disappointed: with the change of leadership, the actress stopped offering bright roles. Not wanting to stay in the backyard, the proud artist wrote a letter of resignation. From now on, she did not give interviews, did not go out, and only her niece was allowed into the house.

do not missFrom the sex symbol of the era to the recluse: what made Nina Ivanova from “Spring on Zarechnaya Street” leave the cinema

In June 1995, the star of Soviet fairy tales fell unsuccessfully and broke her hip. She literally burned out in front of the clinic’s medical staff: the fire in her eyes went out, her appetite and will to live disappeared. Three days later, 83-year-old Olga Viklandt died quietly in her ward.

Back in 1965, Maltseva became an actress at the Leningrad Academic Comedy Theater, so at the time of filming “12 Months” she could already call herself an experienced artist, moreover, very memorable: for her huge eyes and a large bust, Lev Milinder called her colleague “fried eggs with brisket “.

do not missBetrayal or emigration of the director? Why Natalia Arinbasarova divorced Andrei Konchalovsky

The role of the capricious daughter in Marshak’s fairy tale became the most famous in the filmography of Marina Maltseva. A year later, she again collaborated with Anatoly Granik and Samuil Marshak, starring in the film “Smart Things”. Also, viewers could see the actress in the films “Mistakes of Youth”, “Jack Vosmerkin -” American “and” Lucky Man “. Why did it disappear from radar in the late 1980s?

When a crisis ripened in the cinema, the artist continued to play on the stage of her native theater until 1990. Well, then the actress went in search of a better life in New Orleans. Maltseva’s half-sister Elena Gorokhova wrote in her memoirs that in the USA Marina got married “by ad.” Unfortunately, nothing is known about the fate of the 12 Months star, but fans hope that abroad she has found everything she dreamed of.

Natalia studied on the same course with Liana Zhvania at LGITMiK, both girls were noticed at the graduation performance and invited to audition. Like Stepdaughter, Popova was very sentimental, meek and calm, so she was perfect for the role. After the premiere of the fairy tale, the actress fell in popularity, but the main reward for her was the love found right on … the set.

do not missLove on the set: how Gleb Panfilov changed the life of Inna Churikova

Ironically, when Anatoly Granik showed Natalya photos of two candidates for the role of April, the girl liked the blue-eyed blonde, who was not given a job in the end. The nondescript ballet dancer Andrei Bosov, who appeared in the picture, managed to win the actress’s favor already on the set. “At first I didn’t reciprocate. But I did not back down, because Natasha conquered all the male hearts of the Soviet Union, “the dancer shared with StarHit.

After the release of the fairy tale on the screens, the guy came to the actress at the Youth Theater, tenderly courted and called her out on dates. Perseverance bore fruit: in 1974, the lovers got married, and three years later their son Ilya was born.

Popova was not going to stay on maternity leave for a long time, especially since after the release of the film “Did they call the doctor?” strengthened its position in the cinema. However, worthy roles were offered less and less: “Magic black and white”, “For the sake of a few lines”, “On my own land.” Much more successful was the romance with the theater, where the artist played the cult role of Nina Zarechnaya in The Seagull.

In the 90s, Bosov was invited to head the Waterville Art Center, so the family moved to the United States. However, Popova’s heart belonged to Petersburg, so the couple eventually returned to Russia. Now both are engaged in teaching, and Natalya still appears on the stage of the Baltic House Theater. “In our free time we have a rest at the dacha in the Pskov region. Outside the city there is silence, there are no telephones and the Internet, in general, a complete blackout. Let us gain strength there – and back to work! ” – Andrey Bosov told.

do not missOur favorite movie tales: how the fates of Myznikova, Sedykh and other actors developed

First glory, a happy family union – all this would have been impossible if Popova and Bosov had not played in 12 Months. With pride, the couple say that their love began with a fairy tale that continues to this day.

Back in the 30s, Nikolai Agurov took the pseudonym Volkov when he entered the Odessa Drama Theater with his brother Eugene. Nikolai Nikolayevich did not plan to conquer the big screen, but his fate was decided by chance: in 1956, the actor was invited to play the role of the old man Hottabych. From that moment on, the films followed one after another, so the artist had to leave the stage.

Egle in “Scarlet Sails”, Mr. Stenson in “The Head of Chukotka”, a wise professor in “12 Months” – Nikolai Volkov Sr. has more than 50 roles. The last film with the participation of the artist was released after his death in 1985.

do not missVisiting a miracle: New Year’s collection of children’s movie tales

The acting dynasty was continued by the artist’s son, a full namesake. It is interesting that in the 80s he starred in the same film with his father’s colleague Natalia Popova – in “Magic of Black and White”. More than once, Nikolai reviewed films with the participation of his dad, including “12 Months”, admiring his contribution to the national cinema.

Based on materials “Interlocutor».